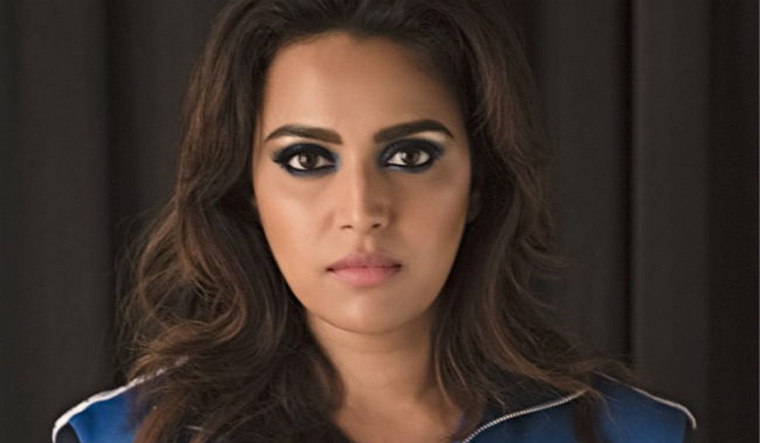 Amazon India has found itself in a soup for associating with Bollywood actress Swara Bhasker whose recent comments on the Kathua rape earned her the title of 'anti-Hindu'. Always known to voice her mind, she was one of the actors who took to social media to express her rage over the Kathua case.

Joining the #JusticeForOurChild campaign, Swara posted a photograph of herself holding a placard that read: “ I am Hindustan. I am Ashamed. 8 years old ! Gangraped! Murdered!! In 'Devi'-sthan temple!!! #Kathua”. What followed was a barrage of comments from hatemongers who called out against her for her 'anti-hindu' comments. 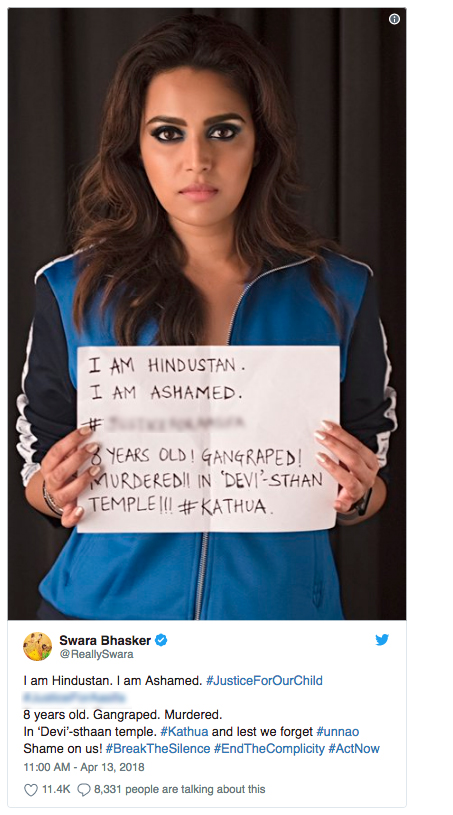 The hullabaloo and hate campaign has seen an unlikely casualty—Amazon India who signed up Swara for a promotional campaign. Swara tweeted an endorsement post for Amazon and the company retweeted it. Kicking up a storm on social media, people started trolling Amazon India for engaging the actor as a campaigner for their “#AjnabiShahatirKiGoogly #ChonkpurCheetahs” campaign.

Things took a dirty turn further as users went the extra mile to trigger #BoycottAmazon movement for siding with an actor who hurt the religious sentiments of Hindus. Some users even downrated the app, explaining their reasons. For instance, a user wrote in the reviews on the app store: “As this is a nation of Hindus, and she has disrespected Hindus by showing her bias towards our peaceful religion, I am boycotting your products and uninstalling this app. Waiting for it more Hindus will unleash the uninstall spree. We are united.”

Amazon has found itself in a limbo, with a part of social media trolling it for endorsing Swara and another trolling it for not standing up for the actor—which is being looked at as 'pro-rapist'. Stuck between the devil and the deep blue sea!

@amazonIN I am going to remove your services from my phone , my friends phone , friends of friends phone if you work with @ReallySwara . Take a step against these type of anti social elements . We don't deal with those who spread controversy in our india .#BoycottAmazon

Hey @amazonIN, I am one of your Prime customer, with at least 5 purchases every month. I am shocked that your are using enemies of my civilisation like Swara for promotion. I will have to boycott you.@ReallySwara#BoycottAmazon pic.twitter.com/aUPFM1BHAs

Brands and their tryst with Indian social media

If it is Amazon that got caught up in the overtly sentimental Twitter spat now, this is not the first time a brand has had to face the brunt of Indian tweeple. A classic case study would be the hate campaign unleashed against online shopping app Snapdeal in 2015. Users went on to downrate the app and uninstall it from their phones, not for any fault of the the e-commerce company, but as a protest against its brand ambassador Aamir Khan. Aamir had raked up a hornet's nest with his comments over the rising cases of intolerance in the country. He said he and his wife Kiran Rao had been thinking of they should move out of the country as she feared for the safety of their child.

Snapdeal had distanced itself from the remark, saying the comments made by the actor were “in his personal capacity” and it was in no way connected with them. What happened next is history—Snapdeal did not renew Aamir's contract in 2016.

For brands, roping in well-known celebrities is a way of cashing in on the consumer base. But the same comes back to bite them, when the celebrity comes under fire for taking a stance on an issue. What does the brand do then? Distance itself from the celebrity or stand by the cause and end being downgraded? Quite a conundrum. Will Amazon go the Snapdeal way with Swara, needs to be seen.

Interestingly, an unlucky Snapdeal lost out on a number of users recently too, due to a misunderstanding. In a case of mistaken identity, many people downgraded and uninstalled ‘Snapdeal’ instead of social networking app ‘Snapchat’. This was supposed to be a protest against unverified reports of Snapchat CEO Evan Speigel's comments against the Indian market. A report had quoted Snapchat's top executive saying that “app is only for rich people” and that he (CEO) was not interested in expanding the business to “poor countries” like India and Spain. This was enough to set off tempers on social media.

For no fault of theirs Myntra, too, was a victim of touchy Indian Tweeple whose 'religious sentiments were hurt.' One morning in 2016, #BoycottMyntra started trending. Social media users were outraged for an ad that showed a scene out of the Mahabharata, where during Druapadi’s vastraharan, Lord Krishna is seen shopping for an ‘extra long sari’ on Myntra. While ScrollDool, a Delhi-based content creation site, clarified that it was an ad they created and that Myntra had nothing to do with it, the harm was done. Mob mentality had taken over and nothing could stop it.