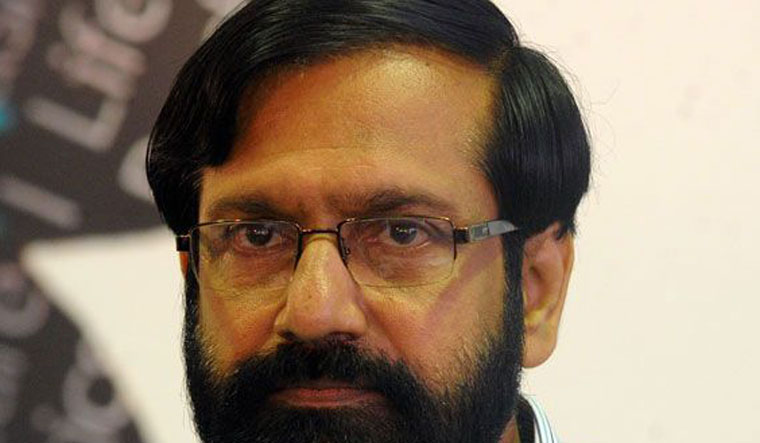 The BJP-led central government indirectly encourages Hindu communal extremists by "shying away from acting against them", and this increases the insecurities of minorities, Sahitya Akademi awardee K.P. Ramanunni has said.

In an interview with IANS, Ramanunni said: "The (central) government is not acting against Hindu communal extremists. They are shying away from the issue. It is like indirect encouragement."

"When it comes to atrocities against minorities, they are not taking strict measures according to the law," he said. "Minorities are insecure."

Ramanunni, a Malayalam writer, made headlines last week when he gave away his Sahitya Akademi Award prize money, minutes after receiving it, to the mother of Junaid Khan, the 16-year-old Muslim boy who was killed in June 2017 in a train by a group of people who hurled communal slurs.

He kept Rs 3 and handed over the rest of the Rs 1 lakh award to Junaid's mother Saira Begum.

"Communal hatred is like cancer. Once it comes, it is very difficult to heal," Ramanunni told IANS.

Asked whether he feels that communal incidents have increased after the present government came into power, Ramanunni said: "Yes."

"After the current government came to power there have been many communal issues. When I say communal, I do not mean from both sides—but mostly the majority Hindu community treating Muslims with intolerance," he said.

He said that the government does not try to put an end to communal clashes and acts like a bystander, adding that the current situation is bad for the well-being of the nation.

Ramanunni's works are known for their message of communal harmony. In the book Daivathinte Pusthakam ("God's Own Book"), which won him the Sahitya Akademi Award for 2017, Prophet Muhammad calls Hindu God Krishna ikka (elder brother) and Krishna affectionately calls the Prophet muthe (precious one).

When asked why he had given the prize money to Junaid's mother, he said: "It's not charity; if it was so, I would have given it to Junaid's mother at her home. When you're giving it at Sahitya Akademi's platform, it has got many meanings. It'll encourage other writers to write about atrocities and tell other Hindus that, according to true Hindu principles, you should not be communal."

He said that Junaid was killed just because he was a Muslim and it was "shameful to the true Hindu culture".

Ramanunni, who received a threat in July 2017 that his right hand would be chopped off, said that such incidents do stifle a writer's mind.

"Many people asked me whether I'll stop writing on communal harmony. I told them 'no'—it is like committing suicide because you have a death threat. For a writer, to not express his stand or change his stand is equal to suicide," he said.

"Even though you say all these things, when you get threats, for many people the subconscious mind prevents them from saying everything... (it's like you are being) controlled indirectly. Threats create that in people. That is a fact," the writer said.

Talking about books in the internet area, Ramanunni said the quality of reading has come down over the years.

"People do not enjoy reading as much as they used to in the past; now it has become a superficial type of reading. Reading has not died, but the quality has come down," he said.