Price of palm oil fell a maximum of 11 pc 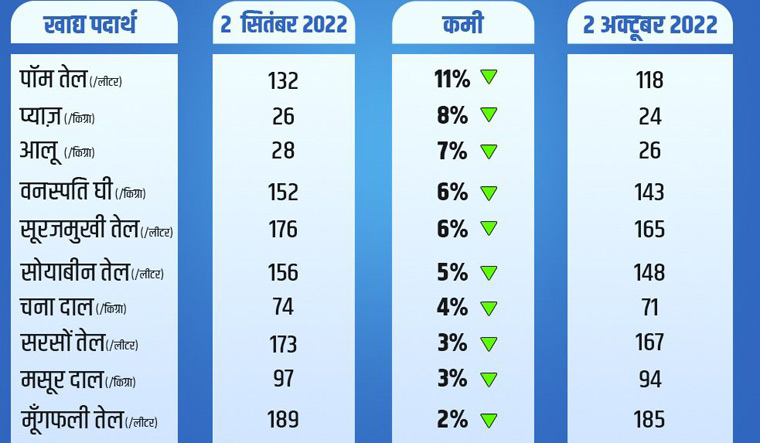 The average prices of 11 essential food items declined 2-11 per cent in the last one month, the government said on Monday.

Food and Consumer Affairs Minister Piyush Goyal tweeted that prices of essential items have fallen, giving relief to monthly household budget. He also shared a chart showing the decline in the prices of 11 items.

On Sunday, the food ministry said domestic edible oil prices have been on a declining trend driven by a fall in global prices.

With falling global rates and lower import duties, retail prices of edible oils have fallen considerably in India, it added.

The ministry also informed that concessional import duties on specified edible oils are in place till March 2023.

This decision was taken on August 31, 2022 by the Central Board of Indirect Taxes and Customs (CBIC) in order to boost domestic supply and keeping retail prices under control.

The basic customs duty on refined varieties of palmolein and refined palm oil is 12.5 per cent, while social welfare cess is 10 per cent. So, the effective duty is 13.75 per cent.

For refined soyabean and sunflower oils, the basic customs duty is 17.5 per cent and taking into account 10 per cent social welfare cess, the effective duty comes to 19.25 per cent.

India meets more than 60 per cent of its edible oil requirement through imports. The country imported a record edible oil worth Rs 1.17 lakh crore in 2020-21 oil marketing year ending October.