India’s rupee has been on a slippery slope this year 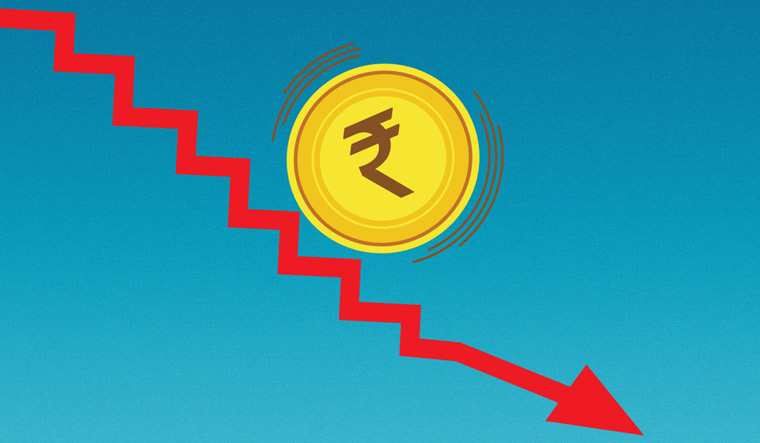 India’s rupee has been on a slippery slope this year. Amid rising interest interests in the US, geo-political uncertainties and sell-off by foreign institutional investors from emerging markets, the dollar has strengthened against a basket of currencies. The rupee crossed 80 to a dollar last week for the first time and while it has slightly pulled back to around 79.80 on Monday, it is widely expected to further depreciate.

A falling rupee is undoubtedly a boon for exporters. India’s exporters from software to textile and chemicals can typically earn more in a falling rupee scenario. But, as the rupee falls, a wide swathe of goods and services, especially those that are imported, do become expensive. At a time, inflation has already risen over the last several months, a depreciating rupee will further add to costs.

For instance, you will have to pay more for imported consumer electronics from smartphones to televisions and refrigerators. Many of the key components that go into these products are also imported. So, even the products assembled in the country will get expensive. A lot of premium and luxury apparel, food products and beverages that are imported will also cost more. So will things like pharmaceuticals as well as medical devices. Oil and gas prices had already gone up this year, amid a spike in crude oil and edible oil prices globally due to the Russian invasion of Ukraine.

Undoubtedly, a falling rupee will have a wide ranging impact on consumer budgets.

According to a survey by LocalCircles, which received responses from over 11,000 people in over 311 districts, three in four people were concerned that they and their families will be able to afford less in the next five years. Rising costs of food, healthcare and medicines are among the key concerns.

“Their fear seems to have basis as India continues to import a considerable amount of pharmaceutical products and medical devices despite having a thriving generic medicines industry and scaling up production of medical devices. The fact remains, that given an option, those who can afford the cost continue to buy imported devices for implants. Also, most of the medical equipment used in hospitals continues to be imported, which will necessarily get reflected in higher cost of treatment in private hospitals and laboratories,” the survey noted.

Its bad news for students planning to go abroad to study as well, especially to US and Canada, as their costs (course costs, local living expenses etc) will go up significantly.

The higher cost of education overseas for their children and grandchildren was a matter of worry for 24 per cent of respondents of the survey.

The Reserve Bank has been intervening in the currency market in the last few months by selling dollars to defend the rupee. That has had an impact on the central bank’s foreign exchange reserves, which have fallen from a record $642 billion in September to around $580 billion. Still the RBI’s reserves remain the fifth highest in the world, giving room for the central bank to continue taking steps to shore up the rupee. It has also announced several other measures in the recent weeks to protect the rupee.

“We have no particular level of the rupee in mind, but we would like to ensure its orderly evolution and we have zero tolerance for volatile and bumpy movements,” RBI Governor Shaktikanta Das said at an event on July 22.

In recent weeks, crude oil prices have fallen. Commodity costs that were on the boil a few months ago, have also cooled fairly now. Further, July is set to become the first month in 2022 that foreign portfolio investors have been net buyers. So far in July (as of 25th) they have net bought Rs 1,099 crore in Indian equity. This is in contrast to the massive Rs 2.16 lakh crore they have pulled out from the equity markets this year.

This has started giving some hope that there could be lesser downward pressure on the rupee now. Hitesh Jain, Senior Vice President – Institutional Research at Yes Securities, believes the worst is priced in the currency, with the value likely to be peaking around 80.5-81 against the greenback.

“There is a growing indication that inflation across the globe has peaked given the wide retreat in food prices, oil and other industrial commodities. Stress in the global supply chain is also reported to have eased, while global aggregate demand is slowing, manifested by a downgrade in global economic forecasts. Consequentially, markets are tapering the expectations on the quantum of Fed rate hikes, which can be characterised by a retracement in US 10 year yields to 2.9 per cent from the peak of 3.4 per cent,” said Jain.

The rupee could even consolidate around the 79 to a dollar mark, he felt.