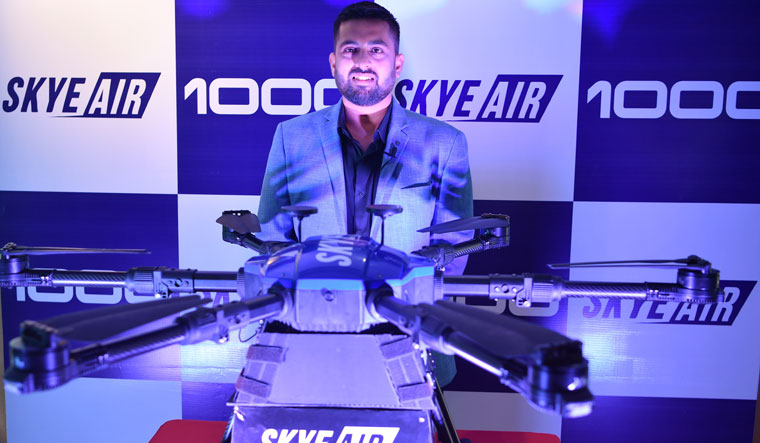 Ankit Kumar, founder and CEO of Skye Air, with one of his company's drones | Arvind Jain

A new type of mobility is in the air, and literally in this case. And unless other technologies that future predictions keep droning on without most of them ever coming to light, this one could be a reality earlier than you think.

A drone with a range of 100km tops the list of targets set by Skye Air, one of the pioneers in the drone delivery logistics industry, a sunrise sector. Billed ‘Artemis’, Skye CEO Ankit Kumar claims “it (Artemis) shall add more value to the offerings that we currently have.”

Drones have vroomed away to glory ever since the Union government liberalised rules in August. While there is a lot of talk of using armed drones as precision missile the way Ukrainians have used to effectively slow down the advance of Russian convoys on Kyiv (India has ordered 100 Kamikaze drones from Israel even while trying to develop indigenous technology in the area), their commercial use in logistics, in delivering anything from groceries to medicines have the companies that have mushroomed on the scene excited.

Skye is just one of them. With the government offering a PLI scheme of Rs 120 crore to develop a local drone ecosystem and studies showing drone delivery could transform logistics in a vast country like India, it won’t be the last. Zomato completed test deliveries of food way back in 2019. Others who got permission to do tests include the likes of SpiceXpress, the cargo arm of SpiceJet, Swiggy as well as startup Asteria Aerospace.

Dunzo, in which Reliance recently pumped in about Rs 1,800 crore, recently carried out trials to roll out a delivery service in Karnataka. Other big investors in the sunrise drone sector in India is Zerodha co-founder Nikhil Kamath, who has reportedly invested in Omnipresent Roboto Tech.

Ankit Kumar of Skye says drones are cost effective enough to transform the cargo business, giving a short calculation. “A distance covered by road (transport) for 100 rupees can be covered by a drone for 40 rupees,” Kumar said.

“And costs will drop further.”

Of course, drones still have a lot of limitations to work within. While the government liberalised rules in August and did away with requirements like the need for a drone pilot licence etc., there are still height and area limitations that come into play. Land area has been divided into three zones — red (drones not allowed), yellow (allowed up to 200 feet) and green (allowed up to 400 feet).

Except for areas across the Yamuna river, most of the national capital comes under the red zone, for example. Another impediment is weight, with kilogram weightage capacity of Indian operators still less than the global capacity, which presently stands at 200 kilos.

This is also one of the reasons for operators like Skye to primarily focus on sending vaccines and medicines and lab items through drones. Insurance is also another issue, with flight insurance options yet to come up, according to Kumar.