Will ban on drone import make India a drone powerhouse? 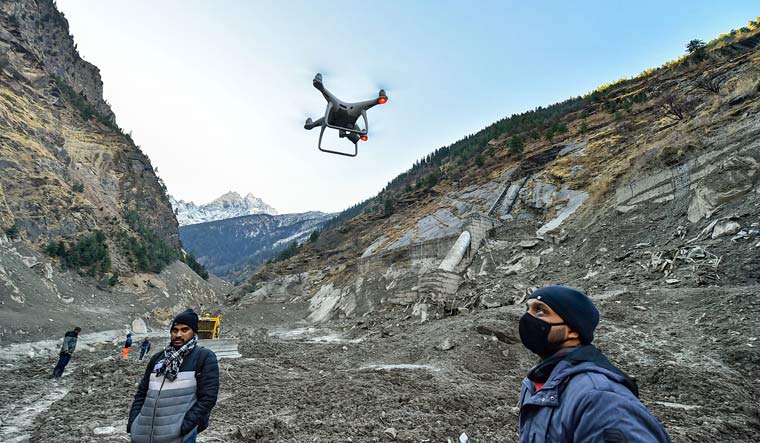 Ever since a ban on import of drones was announced by the Indian Directorate General of Foreign Trade (Ministry of Commerce) with exceptions provided for R&D, defence, and security purposes, there has been a lot of buzz among drone manufacturers and players. There is talk as to how this move will help give a boost to local drone manufacturing in India. Interestingly, as per industry sources, more than 90 per cent of the Indian drone market is flooded by imported drones, the vast majority of which are Chinese. There is also a risk of data and security breaches with the use of these Chinese systems, which is why many countries (such as the United States and other European countries) have outlawed the use of these drones.

“India, adopting a comparable strategy at such an early stage benefits local production and allows Indian drone startups to compete with one another. Furthermore, with PLI schemes and Drone as a Service policies, the intended output and outcome of these drones in specific applications will become cost effective. While the clause enabling manufacturers to import drones in CBU (Complete Built Units) and CKD (Completely Knocked Down) for R&D is beneficial without a ceiling or restriction on the number of imports, the market is likely to continue to see Chinese drones. Furthermore, because the competition is limited to India, manufacturers may become comfortable and complacent, stifling innovation,” said Vinayak Tsalla, CEO, Tsalla Aerospace, a startup incubated by SID, IISc (Indian Institute of Science).

He says that though the first step has been taken by prohibiting the import of CBU and CKD drones, there should also be support for local manufacturers at the component level in order to develop the full ecosystem at breakneck speed. “This entails investing in and incentivising garage startups, micros, and small industries. Otherwise, we may be restricted to only making air frames and end up becoming good integrators. To realise the aim of becoming the world's drone hub, we must establish the ecosystem and compete on a global scale with high-quality products. And it's either now or never!” said Tsalla.

Drones are used for aerial photography and cinematography, land surveys, monitoring infrastructure like roads and highways as well as by the construction industry, defence, mining, telecom, disaster management, oil and gas exploration and monitoring sites. More widespread consumer market applications will soon become less futuristic, keeping pace with progress in tech innovation and higher cost efficiencies, which has developed solutions like drone-facilitated last mile delivery and other support for the retail, healthcare and logistics sectors.

He further says that if the government backs indigenous manufacturing of drones, then a good number of entrepreneurs will try to dabble their hands in this sector. “The usage of drones is fairly a new concept in India. Hence, a lot of safety regulations have to be made mandatory for both manufacturers of drone components and those who import parts and assemble them, and finally for those who use them. Accidents can lead to negative campaigns, which eventually damage the industry. It is the duty of the government to create awareness about the pros and cons of drone use. The purpose may be anything,” said Linganna.

Though the ban on import of foreign drones will definitely provide the impetus to the Indian drone industry to push forward in manufacture and adoption of indigenous platforms and equipment. it could also act as a double-edged sword. “Until our own manufacturers are able to ramp up, this move has the potential to slow down the industry over the next few months, if not the next one or two years. It is definitely not a matter of competence and skill, more the matter of capacity building. We are truly committed to the Indian drone story, and of AatmaNirbhar Bharat. We are excited to see and operationalise the innovations and drones from our Indian manufacturers and OEMs,” remarked Kush Agarwal, Co-Founder and CEO at YelloSKYE and Member-IET Future of Mobility and Transport Panel.

Experts further point out that the government has taken a serious paradigm shift towards the drone industry. The introduction of new drone rules to the launch of the PLI scheme for drone manufacturing and the recent announcement on Drone Shakti and Kisan Drones are a testament to the government's vision and focus towards making India the drone hub.

“For the drone ecosystem to flourish and for innovative new use cases to emerge, access to high-quality and economically priced drone hardware is critical. As 90 per cent of drones used in India are imported, it will be curious to see how the industry adapts and addresses this development which could temporarily at least, derail some well-laid plans. It would have been welcome if the government offered some incentives to the industry to override this. We have the talent and the manpower to make drones an independent and self-reliant industry, but the current ban will upend the ecosystem for some time. However, it will also play a critical role in realising the government's vision of making India a global drone hub,” said Mughilan Thiru Ramasamy, CEO and Co-founder Skylark Drones.

He further points out that what is perhaps equally important is for policymakers to also consider a regulatory mechanism that favours and promotes Indian software to be used for all drone operations across sectors. “Given the sensitive nature of drone operations, it is imperative that India develops its software for use within the country and subsequently also in other regions. With the talent and expertise we have in the country, India can soon rule the drone software market by developing software that is made in India for the world. India’s software industry is more than capable of doing this and it would be an opportunity for Indian software companies to become the Microsoft of the drone industry,” added Ramasamy.