Yearender: Billionaires who got richer in 2020 despite COVID-19

The rich did what they did best – they got richer 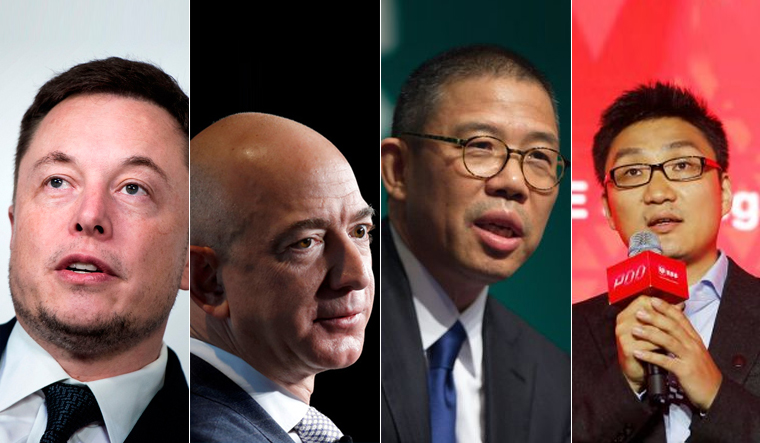 2020 may have been a year of gloom and doom for most people on earth, but some made the best of the pandemic. The ultra rich of the world did what they did best –get richer. According to a study by consulting firm PwC and Swiss Bank UBC, over 2,000 billionaires cumulatively amassed over $10 trillion this year. Many of the ultra rich made the worldwide lockdowns profitable adding to their already obscenely rich net worth. Here is a look at the top 25 who made the most money in 2020, up to December 17. The data is as per reports from Bloomberg Billionaires Index.

The enigmatic Tesla CEO has seen his fortune rise the most this year. After a slump in March when his net worth was at $24.5B, the Tesla CEO has made a 447.5% increase in his wealth as of December 17. His company Space Exploration Technologies Corp is in discussions with investors to double its evaluation to $92 billion by raising funds. SpaceX raised $1.9B in August which sent Musk's net worth soaring.

With most of the world forced indoors by the coronavirus pandemic, online markeptlaces benefitted the most. Amazon saw a huge rise in orders as more and more people chose safety and convenience over shopping at brick and mortar outlets. On September 1, 2020, Bezos was worth $205B before the stock market stabilised. Still, the Amazon founder is the world's richest person with an astounding $189B of which $74.5 was accumulated this year. To put things into perspective his net worth is 2,757,316 times the median US household income and 0.886% of the US GDP.

The 66-year old chairman of Beijing Wantai Biological Pharmacy Enterprice, a make of vaccines and hepatitis test-kits, saw his wealth sore $59.9B this year. The majority of his wealth is due to his 84% stake in Nongfu Spring, a botttled water supplier in China. His wealth saw a sudden spurt on September 8 when the valuation was revised when it became publicly traded. This had led to an increase in net worth of $32B. That same month, he overtook Jack Ma as the richest person in China and second in Asia after India's Mukesh Ambani.

The founder of Chinese e-commerce firm Pinduoduo, Colin Huang made a staggering $31.7B this year taking his net worth to $51.3B. Backed by Tencent, Huang's Pinduoduo saw a huge rise in post-COVID China. Pinduoduo saw its revenue rise 89% as China saw an increase in online buying. With generous discounts, the company has captured a sizeable market in China's smaller towns and rural areas.

From selling pizzas years ago, Gilbert's company Rocket Companies is the largest home mortgage lender in the US. His networth like Colin Huang's, saw a surge in August when the company began trading on the New York Stock Exchange. He is the majority owner of the Cleveland Cavaliers and has sizeable investments in real estate in Detroit.  His fortune saw an increase in $29.2B in 2020.

With more and more people using Facebook, Zuckerberg saw his wealth double in 2020. The 36-year old added $26.1B to his net worth making him one of only five people to have a total net worth of over $100B. According to a January 2020 presentation by the company, Facebook has 2.5 billion monthly users, a figure which in all likelihood has gone up since the pandemic with more and more people shut indoors.

Scott's wealth soared in 2020 along with Bezos as Amazon shares surged on Wall St. Majority of her wealth is from her 4% stake in Amazon which she agreed to as a part of her divorce with Jeff Bezos. They separated in 2019. Mackenzie gained $25.3B this year despite the pandemic.

A former CEO of Microsoft, Ballmer owns a 4% stake in the company. He is currently the largest individual shareholder of Microsoft after Bill Gates sold 4.6 million shares. Like everyone else featured in this list, Ballmer's net worth took a dip  during the early days of the pandemic, but surged to new highs as the share markets around the world rebounded.

The second richest man in India, Adani's net worth has tripled this year thanking to surging shares. His gains have even overatken that of Mukesh Ambani, the richest person in India and Asia. Shares of most of his firms in mining, gas and port units have surged this year. His bet on renewable energy saw the share of Adani Green Energy Ltd surge by over six times after it received a $6B solar power deal.

Chairman of China's largest soy sauce maker Foshan Haitian Flavouring & Food, Pang Kang, like others on this list saw his wealth soar in post-covid China. Pang made an astonishing $18.9B this year. His company produces more than 200 condiments.

Co-founder and CEO of Tencent Holdings, Ma saw his wealth soar by $18.5B this year. Tencent also owns popular Chinese messaging service WEChat which has over 1.2 billion users. Ma has a 7.4% stake in Tencent Holdings.

Co-Vice chairman of Samsung, Lee got a suspended two-and-a-half year sentence in February 2018 on charges of brivery and embezzlement. According to Bloomber Billionaires index, a $10B liability has been added to his net worth to take into account the estimated inheritance tax.

Co-founder of Alphabet, the holding company of Google, Larry Page amassed $18.1B to date as the stock market rebounded on the news of successful vaccine developments around the world.

Founder of Oracle, Ellison added $17.9B to his net worth in 2020. His net worth surge was thanks to the stock market rebound. He is also the largest shareholder of Oracle.

Although he owns only 1% of Microsoft, Gates is the third richest person in the world. His investments, which are managed by Cascade investment, surged as stock markets rebounded. Gates has given away a substantial amount of his fortunes to charity, but is still one of the top three richest in the world.

India and Asia's richest man saw his wealth soar as many silicon valley giants invested in his conglomerate. In April, Facebook invested $5.6B for a 9.9% stake in Ambani's digital venture. Similar investments followed, and as the Indian stock market rebounded from its lows from March, Ambani saw a substantial increase in his fortunes.

Chairman of Xiaomi, Lei Jun saw his fortune's soar as the Chinese smartphone maker grew. Lei owns a 30% stake in Xiaomi, which has become a global rival to Apple and Samsung. Xiaomi directly rivals Samsung in terms of the target group.

Founder of paint and coatings maker Wuthelam Holdings, Goh has a net worth of $27.6B. His company is also the largest shareholder in Nipon Paint.

Zeng is the chairman of Amperex Technology, the largest supplier of electric vehicle batteries in the world. He owns a 25% stake in the company.

With a 33% control of L'Oreal, Bettencourt Meyers is the first woman to feature on this list. She inherited the stake on L'Oreal when her mother Liliane died at the age of 94.

Founder of S.F. Holding, the owner of China's largest parcel delivery company S.F Express, Wang added $14.2B to his wealth this year.

Wang is a co-founder of Meituan Dianping, the world's largest on-demand food delivery company. He is also the chairman and has a 11.3% stake in the company.

Li is the founder and largest shareholder of Zhejiang Geely Holding Group. The company bought Volvo for $1.5B in 2010, making it the biggest acquisition of a foreign carmaker by a Chinese company.