With pandemic continuing unabated, most companies switched to work from home 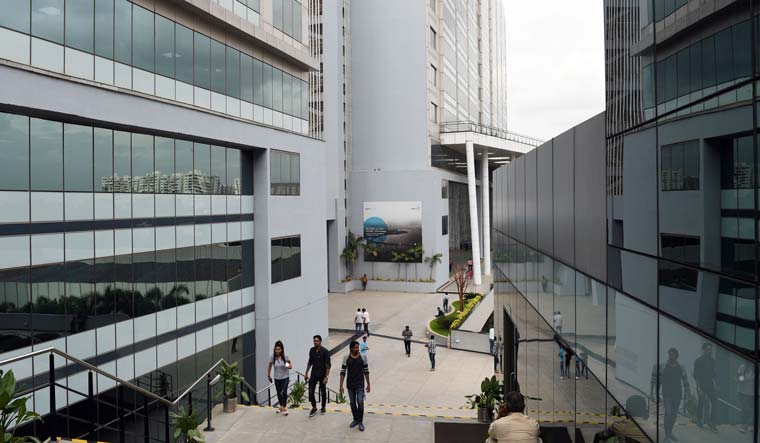 The absorption in commercial real estate segment has been affected by the pandemic, and in Q3 of the calendar year (CY20), it is reported to be merely 30 per cent of pre-COVID-19 level. It is down by almost 17-50 per cent across all major cities in the country.

As per a recent report by Emkay Global Financial Services, occupiers of commercial real estate space such as co-working, media and telecom are the worst hit. The IT sector, which is a large consumer of the commercial space in the country, has been on a wait and watch mode despite the sector doing very well. The IT sector is overall one third of the total demand in real estate, and the demand is down 23 per cent year on year.

Experts say that the concept of work from home (WFH) that was adopted as a pertinent precautionary measure to keep the pandemic in control, is by far the biggest challenge which the COVID-19 outbreak has brought to the office market in big cities, especially the IT city of Bengaluru which has a huge chunk of IT professionals. With the pandemic continuing unabated, most companies have switched to work from home. This has led to demand shrinking in the office market and eventually causing higher vacancy levels in the office space across the country.

As per Vestian Global Workplace Services, in Bengaluru for instance, transaction activity was considerably impacted during the second quarter of the year (April to June 2020) and the quarterly year-on-year office space absorption took a hit of 43 per cent. There were also reports regarding cases of lease re-negotiations as well as consideration of relinquishing office space by many occupiers to bring about cost savings. Consequently, with corporates deterring to commit to new office space, vacancy rates that were recorded at 5.6 per cent in Q1 2020, increased to 6.5 per cent in Q2 2020.

“In the IT city, there has been a positive note. The city’s office market has observed better traction in Q3 2020 as compared with the previous quarter, thereby limiting the upward trajectory of the vacancy rate in Bengaluru. We believe that a revival for the city’s office market is on the cards and with offices opening up to resume their operations post the lockdown, the apprehension regarding increasing empty office spaces will gradually ebb away in the forthcoming period,” said Shrinivas Rao, CEO-APAC, Vestian Global Workplace Services.

Experts say there has been a rethinking of formats as far as the occupancy of the commercial real estate segment is concerned with many trying to consolidate their stores and lease or rent out less commercial spaces as they have started adopting a mix of hybrid offline and online models in order to cater to customers both online as well as offline due to the pandemic.

“Many retailers are now adopting new formats of shopping places and are going for spaces in the range of 1,500 to 2,000sqft rather than very large format stores as in the past in order to cater to both the online and the offline model. Many fashion labels, restaurants, micro breweries etc have also consolidated their stores, which is the new normal,” said Vineet Surana, director of APS Property Solutions Limited.

On the positive side, though there has been an exodus of many technology companies and startups have given up their office space, there are a few who are still hanging on to their spaces. Bengaluru-based legal startup such as SignDesk has not left its offices completely vacant since its operations staff need to be in the office premises to ensure the functioning of its digital stamping solution.

“With the situation normalising, we have decided to open our offices for all employees next month for two days a week. We are also in the process of opening satellite offices in other towns such as Mangalore and Vizag for employees who have travelled there when the pandemic first broke out. Office life will look very different when we open next month, with employees maintaining distance at all times and disinfecting at regular intervals. However, we are looking forward to seeing and working with our colleagues in the flesh once again,” remarked Ashok Kadsur, co-founder, SignDesk.