The bill was passed in Parliament amid opposition protests 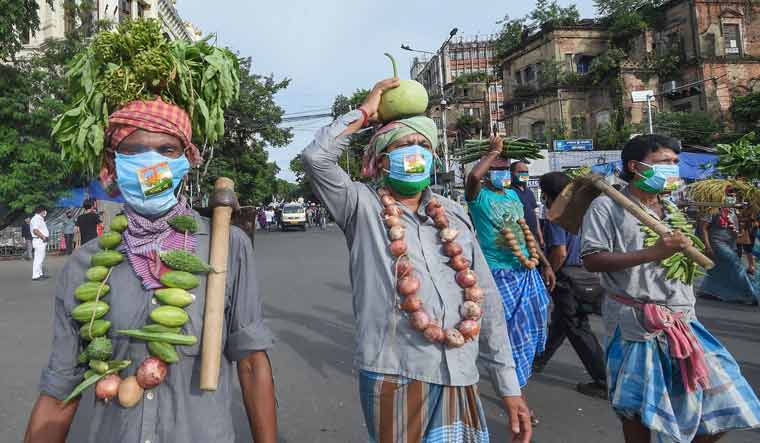 Farmers take part in a protest rally by All India Trinamool Congress party against the farm bills passed in Parliament, in Kolkata | PTI

The Essential Commodities (Amendment) Bill was one of the three key farm bills passed in the Parliament, sparking off widespread protests from opposition parties and even the NDA ally, Shiromani Akali Dal. The bill, which replaces an ordinance promulgated in June, was approved by the Lok Sabha on September 15 and was passed in the upper house on Tuesday by voice vote.

The bill will amend the Essential Commodities Act 1955 which deals with the control of the production, supply and distribution of certain commodities. The new bill proposes to remove cereals, pulses, oilseeds, edible oils, onion and potatoes from the list of essential commodities. The bill is also aimed at removing fears of private investors of excessive regulatory interference in their business operations.

At present there are nine commodities in the list—drugs, fertilizers (organic, inorganic or mixed), foodstuffs including edible oil, hank yarn made from cotton, petroleum and petroleum products, raw jute and jute textiles, seeds of food-crops, fruits, vegetables, cattle fodder, cotton; face masks and sanitisers. The Act gives powers to the government to add or remove a commodity in the ‘Schedule’

Face masks and sanitisers were added to the list on March 13, 2020 in the wake of the COVID-19 outbreak.

The law prohibits hoarding and black marketing of essential commodities. Also, if the Centre finds that the price of a certain commodity is going up due to short supply, it can order the state governments to fix the stock-holding limit of the commodity for a fixed period. Section 3(1) of this Act says:

“...if the Central government is of opinion that it is necessary or expedient so to do for maintaining or increasing supplies of any essential commodity or for securing their equitable distribution and availability at fair prices, (or for securing any essential commodity for the defence of India or the efficient conduct of military operations), it may, by order, provide for regulating or prohibiting the production, supply and distribution thereof and trade and commerce therein."

What are the amendments?

The amendments to the six-and-half-decade law provides that stock holding limit on commodities will only be imposed under exceptional circumstances like national calamities or famine with a surge in prices. Also, processors and value chain participants are exempted from the stock limit.

The bill also removes commodities like edible oil, onion and potato from the list of essential commodities, which means that the government can regulate its supply or include this items back into the list only under “extra ordinary circumstances”.

“The supply of food stuffs, including cereals, pulses, potato, onions, edible oilseeds and oils as the Central government may, by the notification in the Official Gazatte, specify, may be regulated only under extra ordinary circumstances which may include war, fanmine, extra ordinary price rise and natural calamity of grave nature,” says sub section (1A) of the amended bill.

According to experts, the amendments to the Essential Commodities Act is a right step as it will boost farmers' income, but it may also lead to increase in rural poverty and have an adverse impact on the public distribution system.

Foodstuffs like pulses, onions and edible oil are part of a common man’s daily essential commodities. The government not regulating the supply of such food items means the chances of hoarding are high.

The farmers' income will be increased as they will be able to sale their produce anywhere, and not just to the local mandi. Now, large corporates will go deep into villages to buy crops directly. It will be remunerative for farmers. But it may also have two major adverse impacts if prices of essential produce jump at the farm level due to bulk procurement by large players or hoarders, say experts.

The Forum of Traders Organisations, a body of traders, said that amendment to the Act will allow big businessmen to hoard essential commodities such as cereals, pulses, edible oil, onion and potato leading to rise in prices.

Were the amendments necessary?

The government claims that while India has become surplus in most agri-commodities, farmers have been unable to get better prices due to lack of investment in cold storage, warehouses, processing and export. It says the EC Act was handy in the 1960s and 1970s when India was still a net importer of food.

According to the Economic Survey 2019-20, frequent and unpredictable imposition of blanket stock limits on commodities under EC Act neither brings down prices nor reduces price volatility. “However, such intervention does enable opportunities for rent-seeking (unproductive income) and harassment,” it says.

Why does opposition protest?

The opposition parties have joined hands to put up a united protest against the government which, they claim, has rushed through the legislations without due discussions in a new empty House. They say that the new amendments to the EC Act erodes the Constitutional rights of the states since it is a highly centralising Act. According to them, the new law will only help hoarders and black-marketeers.

The government, however, argues that the amendment will boost investment in agriculture sector and will also create more storage capacities to reduce post harvest loss of crops.

Replying to a debate in Parliament, Minister of State for Consumer Affairs, Food and Public Distribution Danve Raosaheb Dadarao said the stock limit conditions imposed through the law were hindering investment in the agriculture infrastructure. He said the move will also boost investment in agriculture sector and will also create more storage capacities to reduce post harvest loss of crops.

“This amendment is in favour of both farmers and consumers,” Dadarao added.

According to him, changes in the 1955 law is an important step by the government to achieve its target of doubling farmers’ income and also for ease of doing business. He said the essential commodities act was brought when the country was not a self sufficient in food grains production. But now the situation has changed, therefore the amendment was required, he said.