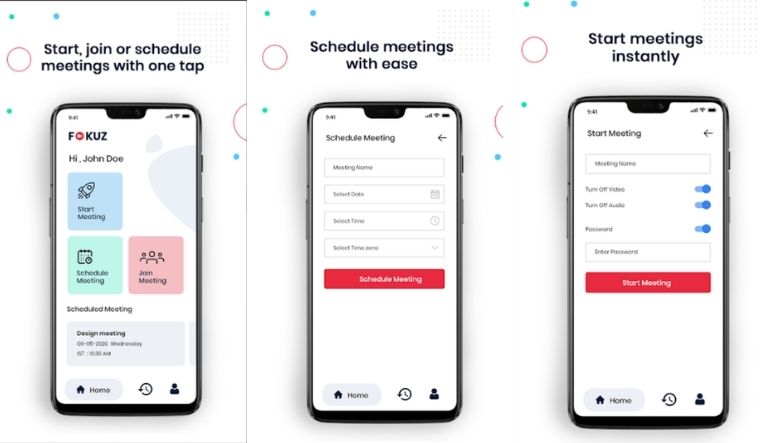 On August 7, Bengaluru-based Stock Market Institute (SMI) conducted a virtual job fair in the city amid the pandemic. Around 2,800 candidates attended the job fair in which prominent Fortune 50 companies in India participated. From one-on-one interviews to group discussions, everything at the virtual fair resembled a real job fair, but sans the crowd.

When it decided to conduct its first virtual job fair, one of the major challenges for SMI was managing such a huge number of participants. But the day-long affair went smoothly without the huff and puff of network issues, thanks to Fokuz, a video-conferencing platform developed by Kochi-based Skyislimit Technologies.

"The main hurdle was hosting so many companies online and ensuring a hassle-free experience. We read about Fokuz and we decided to approach. They customised the app and accommodated whatever was requested. Fifty companies were online. Everything was smooth," says Kishore B.S., co-founder and CDO at Stock Market Institute.

The quarantine economy is led by digitisation. Apps that facilitate video-conferencing, online teaching and tutoring, payments, delivery, etc, have clocked in massive growth numbers even when other businesses have taken a hit.

In the world of virtual video-conferencing, Zoom remains the undisputed king of the quarantine economy. It clocked in a record 335 per cent growth in revenue in the second quarter piggybacking on the new post-pandemic world order. Earlier, video-conferencing was just an added feature in a package. But now it has become a necessity.

Zoom's growth story and immense market potential have inspired other developers and businesses to carve out a small portion of the app economy for themselves. So how does Fokuz fit in?

"Our USP is that it is a customisable app. For instance, it can be customised to an experience where the host can see everyone while the individual participant cannot see everyone. We are able to offer a customisable experience because it is a start-up. It can be integrated into any product, unlike those currently in popular use," says Mohan. "The team customised and accommodated whatever we requested within a short span of time," testifies Kishore.

The fresh UI of Fokuz makes it stand out from its peers in the market. The app is available across Android and iOS devices as well as Windows and macOS computers. Launched in June, Fokuz now sees more than 8,000 daily active users. The basic version of the app is free for the first two months.

In September 2019, a report by Gartner had pegged the video conference market at $2 billion. Then, the pandemic struck the globe in December the same year. By January this year, the same research house pegged the virtual conference/meeting market at $67 billion. "I won't say Fokuz is the perfect product. It was developed in four months foreseeing the demand for a safe video-conferencing platform. I'm still developing it," says Mohan. His motto is to create simple products, like Microsoft. "Technology is something you should use, but not misuse," he says.

True to his words, the company is now en route to expand its offerings to a virtual workplace software. The Fokuz Virtual Business Centre will not be limited to video-conferencing alone. It will be a total workplace management product. The plan is to replicate a typical workplace—with doors and cabins and workflow management—on a virtual platform. The advantage—it saves employees and supervisors from the hassle of multiple software logins. The product is being developed to be customisable for various industry settings.