82,000 OFB staff to go on indefinite strike against corporatisation plan 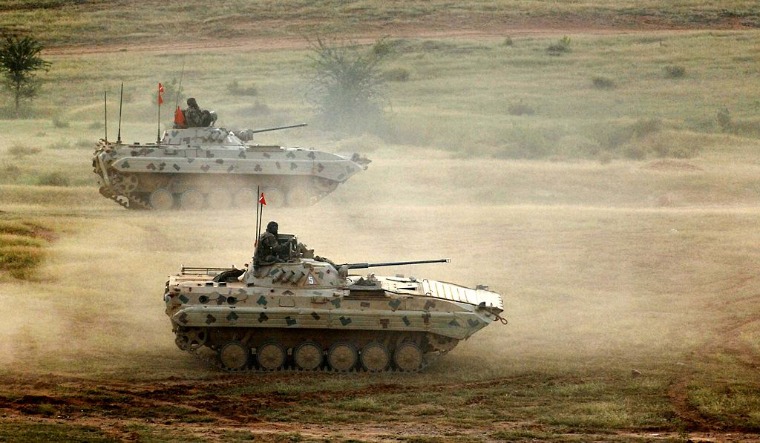 A day after the ministry of defence placed an order worth over Rs 1,000 crore for infantry vehicles, 82,000 employees of ordnance factories have decided to go on indefinite strike.

Over 82,000 employees working in 41 ordnance factories have decided to go on indefinite strike against the government’s decision to implement corporatisation of the Ordnance Factory Board (OFB). It is the first setback to Prime Minister Narendra Modi's announcements under the "Atmanirbhar Bharat Abhiyan" aimed to boost the economy in the post-COVID-19 era.

"With induction of these 156 BMP infantry combat vehicles, the existing deficiency in the mechanised infantry battalions will be mitigated and the combat capability of the Army will be further enhanced," a defence ministry official said, while placing the order.

On May 16, while announcing the fourth tranche of the Rs. 20 lakh crore financial relief package, Union Finance Minister Nirmala Sitharaman announced the government's decision of corporatise the Ordnance Factory Board (OFB), arguing that the move is aimed at improving autonomy, accountability and efficiency in ordnance supplies. She added that in the near future, the OFB factories could be listed in the markets to bring in transparency in their operations.

On Wednesday, federations of defence civilian employees took a collective decision to go ahead with an indefinite strike against the government decision, which they called as "arbitrary, illegal and unjustified".

In a joint statement issued by three recognised federations—All India Defence Employees Federation, Indian National Defence Worker's Federation and Bhartiya Pratiraksha Mazdoor Sangh—the protesting workers claimed that the government move is against the agreement between the federations and the ministry of defence in the past.

"Four successive defence ministers of the country including George Fernandes, Pranab Mukherjee, A.K. Antony and Manohar Parrikar have given written commitments that the Ordnance factories would not be corporatised. The present decision of the government is against all these assurances and agreements," C. Srikumar, general secretary, All India Defence Employees Federation (AIDEF), said.

He said that the date of commencement of indefinite strike will be taken soon after strike ballot throughout the country.

Defence unions also claimed that they had deferred their strike (last August) only after an assurance given by the defence ministry and a high-level official committee was constituted to study the possibility of OFB achieving Rs. 30,000 crore production target in the present setup.

"Since there was a dispute between the employees’ federations and government with regard to the terms of reference represented to the defence minister in October 2019, government has arbitrarily made the announcements on corporatisation of OFB by taking advantage of COVID-19 lockdown," joint statement by the defence employees’ federations alleged.

The federations also stated that the government decision has hurt the sentiments of 82,000 employees of ordnance factories who are working relentlessly in manufacturing of all types of PPEs required for medical fraternity for fighting against the COVID-19 pandemic.

"All these ordnance factories’ employees took risk of their life and were working throughout the COVID lockdown. Instead of recognising their service, a major decision [was taken] to convert this war industry as a PSU and thereafter to privatise the same," the statement further said.