Reliance Industries, Johnson & Johnson and Adi Enterprise worked together to make it 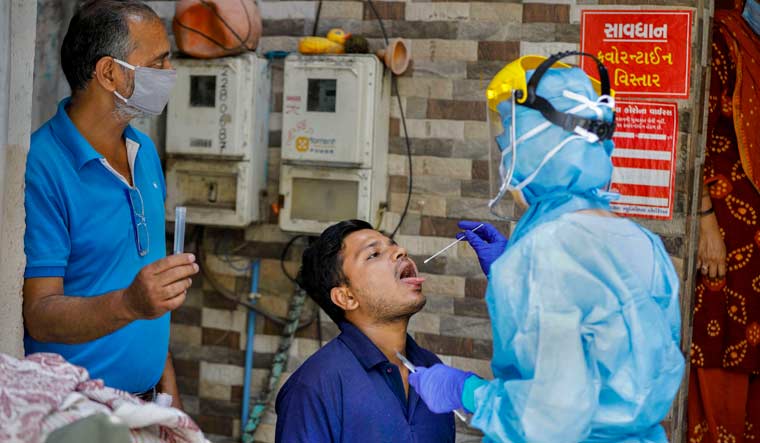 As COVID-19 pandemic spread quickly, India faced twin challenge—short supply of testing swabs and those imported from China at a steep price of Rs 17 per stick were proving to be inferior.

A solution was fixed in 10-days combining the expertise of Johnson & Johnson of manufacturing a similar product in earbuds, and Reliance Industries providing custom-made polyester staple fiber that resulted in the cost of swabs coming down to just Rs 1.7 per unit.

While the earbuds typically use cotton and the stick is too small to take throat and nasal swabs, an extender was used to increase the length of the stem and the PSF from Reliance provided lab-approved material for testing.

Sandeep Makkar, Managing Director, Johnson and Johnson Medical India told PTI that the entire plan was stitched in matter of 7 to 10 days, soon after the Ministry of Textile contacted the company for a solution to the shortage of testing swabs.

Vasai-based Adi Enterprise, which does third-party manufacturing of earbuds for J&J, has started manufacturing the test swabs which are approved by the National Institute of Virology, Pune.

It is importing new machinery which will eliminate the need for manual putting of extenders and further bring down the cost to just Re 1 per swab.

"Manufacturing of the test swabs in a record seven days from conceptualisation to production under the Make In India initiative required ingenuity and rapid action.

"In this design, Reliance provided the raw material and Johnson &amp; Johnson India provided pro bono scientific expertise of research, development, engineering for manufacturing of the test swabs. Production has already started on May 6, 2020, by the manufacturer Adi Enterprise, an Indian MSME in Mumbai," he said.

Officials involved in the project said the move started over a 'Zoom' call the ministry of textile did with J&J and Reliance, and within 24 hours Adi Enterprise was given permission to produce a prototype that was sent to the National Institute of Virology.

The premier institute suggested modifications that were incorporated and prototype resent. After approval, Adi Enterprise was given orders to manufacture.

The company, they said, is making about one lakh of test swabs a day, which after machine automation will increase to 5-6 lakh in 3 weeks time.

J&J is making sure the government is aware of the pricing and batches manufactured so as to prevent mark-ups in price or swabs being exported.

As capacity scales up, India may begin to export swabs as well, they said.

Officials said it all started about 10 days back when Ravi Kapoor, Secretary, Textiles contacted J&J and Reliance to check whether India can manufacture swab required for testing purposes.

The two companies readily agreed to take the project on a mission mode with no commercial considerations.

Over the next two days, the companies managed to get the polyester shipped to Adi Enterprise which wrapped it around the stem used for earbuds and sent to the National Institute of Virology in Pune for testing.

NIV suggested that the length was too small and this was solved by using an extender. Thereafter NIV approved of the design.

Adi Enterprise, an MSME, was given charge of manufacturing and it produced a WHO-standard product under the supervision of J&K and Reliance, they added.