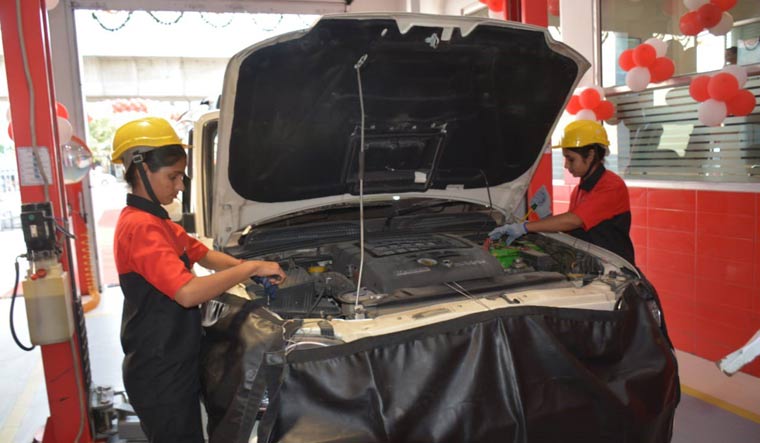 Turn signals, the windscreen wiper, rearview mirrors and the glove compartment: These indispensable objects in modern cars have one thing in common—they were designed by women.

From Dorothy Levitt in the early 20th century to General Motor’s ‘Damsels of Design’ in the late 1950s, women have played a crucial role in the evolution of automobiles as we know them today. Yet, as of 2016, less than 11 per cent of the global automotive workforce were women.

Against this context, Mahindra & Mahindra’s move to set up India’s first all-woman automotive service centre is at once timely and much-needed. As part of the company’s ‘Pink Collars’ initiative, the Compact Qwik workshop in Jaipur features nine women on its staff, working in roles from that of technicians to service advisors, drivers, part managers and security guards.

As part of the initiative, M&M have tied up with Industrial Training Institutes (ITT) under the Ministry of Skill Development and Entrepreneurship, imparting the latest automotive knowledge to prepare women for the automotive workforce. Mahindra conducts special recruitment drives to hire women workers from these centres.

The first batch of Pink Collars was trained in October 2018, with 22 girl students selected from multiple ITIs in Western Maharashtra at the Mahinda Institute of Learning Excellence (MILE), Igatpuri. According to the National Skills Network, up to 170 women joined Mahindra’s core productive workforce at their authorised workshops across India in the last financial year.

In a promotional video released by Mahindra, some of the Pink Collar workers shared their experience. "Once we had to change the shockers of a car which had to be delivered urgently. And while working on it one of my technician colleagues had to switch to another car for two minutes. Meanwhile, I changed the shockers, to which he was pleasantly surprised,” says trainee technician Palalvi Sonar in the video.

To encourage the initiative,  Mahindra does not charge the technical training fee for its women-dealer employees and aims to have its dealers recruit women as one-third of their trainees.

Mahindra Group chairman Anand Mahindra tweeted on the initiative in March, saying, “I like the idea of taking a term like ‘Pink Collar’ which refers to a job traditionally considered a woman’s work and turning it on its head...No more gender stereotypes...”