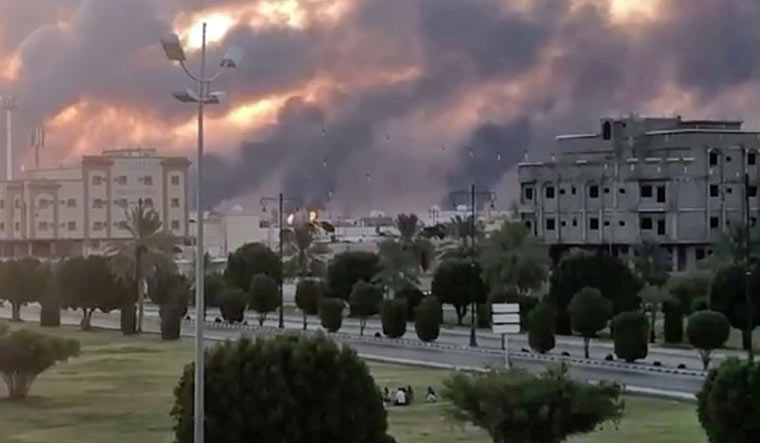 Smoke is seen following a fire at an Aramco factory in Abqaiq, Saudi Arabia | Reuters

The attacks, which hit state-controlled oil giant Saudi Aramco's facilities in Khurais and the world's largest oil processing facility at Abqaiq, were claimed by Yemen's Huthi rebels. But Washington has pointed the finger at Tehran, with US President Donald Trump imposing another round of sanctions on Iran on Friday. Tehran, has, however, denied responsibility of the attacks.

The situation raised the risk of an unpredictable escalation in the troubled region where Saudi Arabia and Iran are locked in a decades-old struggle for dominance.

Saudi officials this week unveiled what they said were fragments of 25 drones and cruise missiles fired at the two oil hubs. "We will have production at the same level as before the strike by the end of this month—we are coming back stronger," said Fahad al-Abdulkareem, an Aramco general manager.

Saudi Arabia has restored 50 per cent of production lost in Saturday’s attacks, newly appointed Energy Minister Prince Abdulaziz bin Salman said on Tuesday. He added that the kingdom is using reserves to supply oil to its customers at pre-attack levels and normal production will return by the end of September.

Industry analyst Alex Schindelar, president of the Energy Intelligence group, said that "restoring sustainable production capacity to 11 million barrels per day by the end of the month is an ambitious target, given the amount of repairs required".

US Secretary of State Mike Pompeo said on Thursday there was "enormous consensus in the region" that Iran executed the attacks, despite its denials and the Yemeni rebels' claims they were responsible. The Huthi rebels are backed by Iran in Yemen's conflict, while a Saudi-led coalition supports the internationally recognised government.

Yemen's Huthi rebels have previously hit dozens of targets in Saudi Arabia, and their advancing arsenal has exposed the kingdom's vulnerability despite vast military spending.

US sanctions on Iran that had been lifted or waived under the erstwhile Joint Comprehensive Plan of Action (JCPOA)—otherwise known as the Iran Nuclear Deal—were reimposed in while on November 4, 2018.