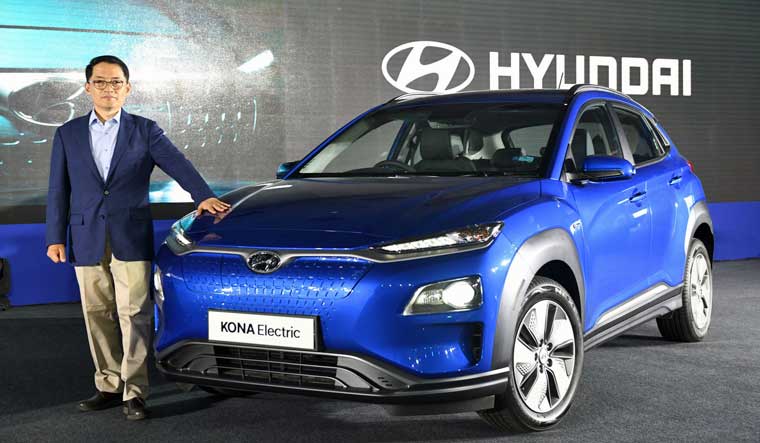 South Korean car manufacturer, Hyundai Motor India Ltd (HMIL), launched the Kona Electric at the Buddh International Circuit in Greater Noida at a competitive price of Rs 25,30,000/-. Taking steps towards a cleaner and greener environment, this is Hyundai’s big leap towards breathing better. The Hyundai Kona has arrived in India pretty soon, after it was launched at the Geneva Motor Show only last year. Considering that the Kona has received rave reviews, especially in Europe and Australia, it sure seems all geared up to do well in India too.

“India is ushering into a new era with clean and connected mobility. We are committed to the government’s vision of 'shared, connected and clean' mobility,” said S.S. Kim, MD and CEO, HMIL, while talking about bringing in relevant technology to the Indian market especially when it came to the clean mobility space.

The Kona Electric is touted to dispel all apprehensions about range anxiety as it offers a range of 452 kms/charge according to ARAI figures. What it means is that you can drive from Mumbai to Pune, come back to Mumbai and then drive back again to Pune, all in one single charge! How cool is that?

Though the Kona’s design is not radical, it is well-designed and will appeal to most SUV lovers, especially the front grille which looks quite futuristic. Its ground clearance makes for not just good overall visibility but also for easy to enter and exit. The SUV will be available in five different colours including a Polar white with a Phantom Black roof. With 6-airbags, four driving modes, a 17.7 cm touchscreen and R17 alloy wheels, there’s not much to dislike in the Kona Electric.

Automobile enthusiasts have been mainly looking forward to the Kona because of the range that it is capable of. The SUV’s 39.2 kWh advanced Lithium-ion polymer battery which is located in the car’s underbody can be charged in two ways, one is with a quick DC charger where an 80 per cent charge @50 kW can be done in 57 minutes flat, using a CCS Type II charging port and the other way is with a 7.2kW Level-II charger which takes 6 hours and 10 minutes for it to get fully charged.

However, the best announcement that came today from HMIL was that they are working with Indian Oil Corporation Limited to develop infrastructure at certain gas stations in four cities of Mumbai, Delhi, Bangalore and Chennai, with Fast Charger (CCS-Type – Single Port) facility. This will indeed go a long way in helping EV owners travel with peace of mind, atleast when driving within the city. Besides, even a special Kona fleet that will basically power one Kona Electric to another (just like the way you use jumper cables to jump start your car, drawing power from one car to another car) will be available in the above-mentioned cities, in case customers need charging support. Besides, a tie up with MapMyIndia will also tell Kona Electric owners how they can reach the nearest charging station via their mobile device apps.

While Hollywood star George Clooney was among the first to buy its rival’s car, the Toyota Prius, when it was first launched, conscientious Indians will also not be far behind in acquiring the new Hyundai Kona Electric. And why not, afterall, simply put, who doesn’t want a cleaner environment—if only to at least breathe better?