Jet Airways employees urge government to be their 'chowkidar'

Employees ask government to save the airline and the 16,000 families dependent on it 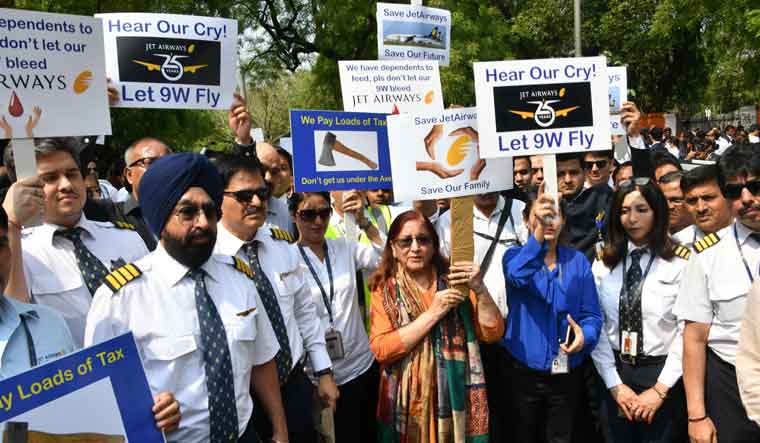 Jet Airways employees hold placards as they gather to make an appeal to save the airline after it announced suspension of flight operations, in New Delhi, on Thursday | Arvind Jain

Jet Airways employees are a livid lot. Dressed in their blue, white and yellow uniforms on the streets of Jantar Mantar, some even had their parents in tow. There were no stages or loudspeakers. Instead, there were just about a hundred placards being held by these 600 to 700 employees of Jet Airways. Their plea is to non-other than Prime Minister Narendra Modi, to save the airline and the 16,000 families dependent on it.

Earlier, these employees had staged peaceful demonstrations at Delhi Airport's T-3 terminal and at Mumbai airport.

On Thursday, the mood at the protest meeting was peaceful and even silent during the demonstration except for bytes to television cameras. The employees with whom THE WEEK spoke seemed upbeat about the 25-year-old airlines' revival and would like to fly with the Jet Airways again.

Employees for ground duties as well as in-flight duties had stopped going to their workplace as the airline continued to grind to a halt, one after the other aircraft from its fleet of 120. “We do not know when we can get back to work again. But the government should step in and ask SBI to release the funds it promised,” said Anupam Sharma, 26, a senior in-flight crew member of Jet Airways.

Asked if they were looking for opportunities with other airlines as the future of their jobs looks uncertain, Sharma, seemed determined to bite it hard and bear through it. "We would like to stick with this airline and get to fly with it again," he said.

But the going may not be easy for many of these young men and women who form the backbone of the air and ground crew members of the airline. Some of them had taken loans of up to Rs 1 crore to join Jet Airways' Cadet Development Programme which trains aircrew members to pilots.

"Many of us had taken loans to earn our commercial pilot licences. Luckily, I had just paid off mine," said Deshpreet Singh Vaid, a first officer with Jet Airways, who had earned his wings being with the airline for over eight years. Vaid said that he is here at Jantar Mantar to draw the attention of the government to their plight.

Crew members and senior pilots of Jet Airways also felt that the government should step in to save the airline. “Who else can we turn to if not for the government,” said Sukhbir Singh, flight commander, who had joined Jet Airways six years back from the Indian Air Force.

“I do not know who else to turn to. It is only the government who is the chowkidar of this country. Only the government can save us,” said Nirupama Kukreti, a senior flight attendant of Jet Airways. "I am sure the government, which, after all, pays thousands of crores of taxpayers money to rescue Air India, would consider the contribution of Jet Airways to India's economy," Kukreti said.

"All we need is funds to operate. I had no problems working with the earlier management. But now that Naresh Goyal is gone, the government should step in to see us through this crisis," said a senior pilot of the airline who did not want to be acknowledged.

But so far the only frustration for Jet's employees is that the government is 'still not reacting', said the Jet Airways pilot.

On Thursday, the ministry of civil aviation was looking into the Jet crisis on a war footing. Meetings were called by the civil aviation secretary on Thursday with officials from Airports Authority of India, DGCA and private airport developers GVK and GMR.

"The government is looking to resolve the overall crisis being faced in the sector due to Jet Airway's suspension of operations," said Pradeep Singh Kharola, civil aviation secretary.

Kharola is meeting officials from all airlines as well to come to an understanding about providing service to the passengers of routes vacated by the beleaguered Jet Airways. The meeting is understood to be continuing till late in the evening.