The Ranbaxy rumble: How the once-mighty business siblings face threat of jail term 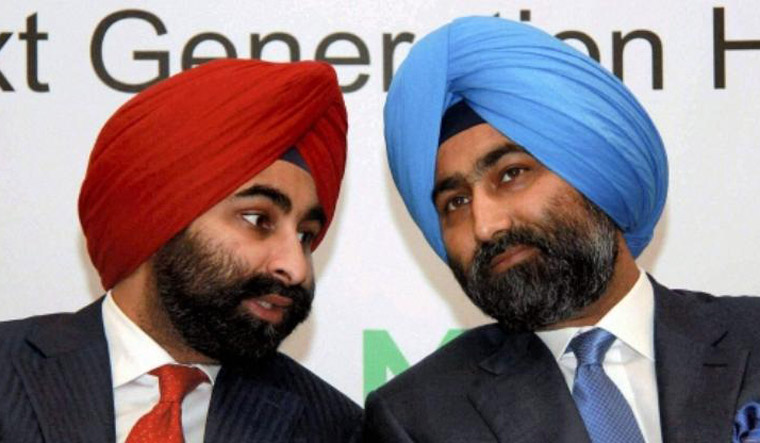 Big money, betrayal and boardroom intrigue. Cheating allegations and courtroom drama, with goons and gurus thrown in. You could be excused if you thought the unfolding crises of Ranbaxy brothers Malvinder and Shivinder were part of a potboiler movie plot. But they aren't. This real life story has now reached a crescendo, with India's Supreme Court pulling up the two brothers this week with a threat to put them behind bars.

“We will send you to jail,” a Supreme Court bench, headed by chief justice Ranjan Gogoi, threatened Malvinder Mohan Singh and Shivinder Mohan Singh, who were forced to appear in court personally by a previous order. The court told the brothers that they will be held in contempt of court and jailed if they don't pay up in time for the next hearing.

The issue dates back to the brothers selling off their 34.8 per cent controlling stake in the hugely successful Ranbaxy Laboratories, started by their father, to the Japanese pharma major Daiichi, back in 2008. The deal was worth around Rs. 31,000 crore (in today's value terms). By the time the acquisition process was complete, Daiichi held 63.9 per cent of the company (Daiichi later sold Ranbaxy to Sun Pharmaceuticals in 2014).

But trouble cropped up within months as the US banned medicines from two of Ranbaxy's Indian plants, and the Food and Drug Administration (FDA) of the US government launched a probe against the drug company. Ranbaxy had to plead guilty and settle for around Rs. 3,400 crore (equivalent). Alleging that the Indian owners withheld information regarding the status of the company and the US investigations at the time of sale, Daiichi approached an international arbitration tribunal in Singapore, which awarded it a compensation of Rs. 3,500 crore. While the Delhi High Court upheld the award in February last year, the case has now reached the Supreme Court with not only the dues not forthcoming, but the brothers getting mired in a litany of cases, allegations and counter-allegations.

These range from allegations of money being siphoned off to solvency status of the businesses they entered post-Ranbaxy (Fortis Healthcare and Religare Enterprises Limited). Lenders like ICICI Bank have also approached the courts, asking them to intervene to ensure that they get the money taken as loans by the brothers.

The drama got a dash of spice when Shivinder gave up his corporate fiefdom in 2015 and declared he was taking a spiritual path and going to live at the Radha Soami Satsang in Punjab, only to return last year and allege that his brother had run their businesses to the ground. In his petition filed with the Company Law Tribunal and as reported by a business daily, Shivinder alleged that Malvinder and Sunil Godhwani, the former-chief of Religare, diverted Rs 750 crore from Religare Finvest, a wholly-owned subsidiary of Religare and Rs 473 crore from Fortis. Acerbating matters, government agencies started probing the state of affairs of the two brothers and their finances, with allegations and counter- allegations flying thick.

With one round of conciliatory talks initiated by their ailing mother failing, matters came to a head on December 5, when Malvinder posted a video on social media displaying injuries he said had been sustained in a physical altercation between him and his brother. “He injured me...he threatened me. And he refused to budge until the team here separated him from me,” he says in the short video, which sent ripples through corporate and social circles.

However, the courts have steadfastly refused to divert their attention from the case at hand—that of the Rs 3,500 crore due to Daiichi—no matter the reasons offered. Reminiscent of Anil Ambani's Ericsson fiasco, the brothers have claimed various reasons for not paying up, including the allegations of financial mismanagement, how valuations of their assets have gone down and how money is due to them. Senior advocate for Daiichi, meanwhile, fears that the brothers are adopting tactics to delay the proceedings so that the case goes into insolvency proceedings, which would mean the money would be locked up in protracted bankruptcy procedures.

But the courts mean business. “We have given you a chance but you are unable to pay,” the court said, adding it was embarrassing for people of their stature to renege on payments. The next hearing on contempt charges this coming Thursday will determine if the once-mighty brothers will be packed off to jail or not.