Ambani said his firm's investment in the state has grown to Rs 28,000 crore 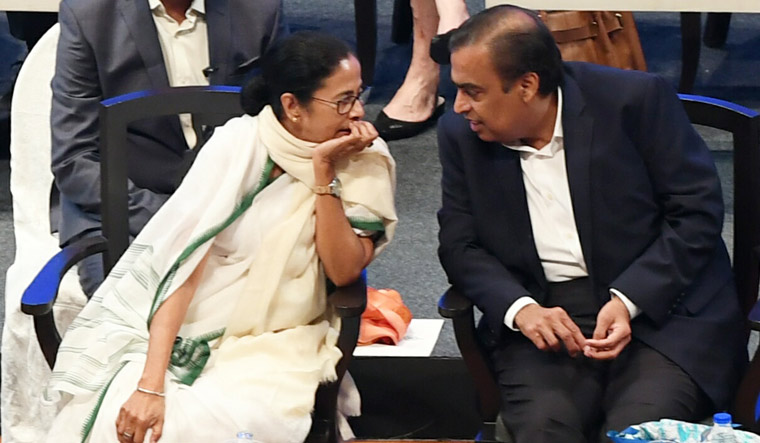 "This accounts for about one-tenth of our total investments in India so far," he said adding the firm's telecom arm, Jio has become the largest investor in the digital space in the state.

"Now, we have firmed up our plan for a further investment of over Rs 10,000 crores," he told the Bengal Global Business Summit here.

Fresh investments would be in extending Jio's high-speed 4G network coverage to all entire state within 2019, connecting homes with fibre to carry high-speed internet and HD quality broadcasting and in logistics hub.

"West Bengal is poised to become the logistics hub of the east, with plans to attract investments of Rs 5,000 crore by 2020," he said. "We at Reliance operate nearly 3 million square feet of warehouses in Bengal and with our new commerce initiative, this will increase manifold in the next 24 months."

Jio and Reliance Retail will shortly launch a unique new commerce platform, which will bring win-win benefits to consumers, retailers, and producers, he said without elaborating.

"Across the country, this platform will enrich and empower as many as 3 crore small shopkeepers," he said.

He complimented West Bengal Chief Minister Mamata Banerjee for "a remarkable transformation" she had brought about in the state in just one year.

"Both Bengal and its capital are not just leapfrogging; they are pole-vaulting to new heights of progress," he said. "Bengal's GDP has crossed Rs 10 lakh crores. It was less than Rs 4 lakh crores at the beginning of this decade when you took reins of this state in your able hands."

The state's GDP growth at 9.1 per cent is higher than the national average.

"West Bengal has gained a foothold in the group of the fastest-growing states in India with an all-around turnaround under your leadership," he said adding agriculture is booming and farmers' incomes are rising.

Ambani said India in 2019 is all set to become the world's fifth largest economy, overtaking the United Kingdom.

"We are ahead of all countries except the United States, China, Japan, and Germany," he said. "In about a decade, India will become the third largest economy with a GDP of over USD 10 trillion which is about four times the size of our economy today."

In two decades, India will become the second largest economy in the world, he said expressing confidence that the country can even overtake China to become the world's No. 1 economic power by 2047.