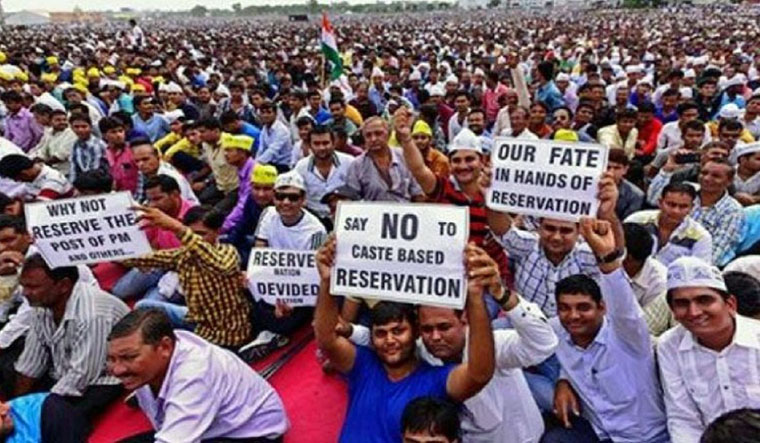 The hastily passed economic reservation bill in the Parliament has caused a major debate in the country. Many scholars and activists have expressed opposition to the bill on the ground that it is anti-constitutional. Surprisingly, people from unlikely quarters jumped in support of this new reservation out of a misconception that the bill is going to benefit people belonging to disadvantaged classes. This article is an attempt to critically examine the argument for economic reservation based on data and literature.

Caste-based reservation was devised as a means of affirmative action which would help the people oppressed by the traditional caste system to break its shackles by ensuring representation and positive discrimination in the then dominant public sector. Even after 60 years of affirmative action, these groups are yet to escape from marginalisation and exclusion completely. A major reason behind this can be attributed to the failure of the polity to implement land reforms. While land reforms formed a part of the initial few five-year plans, governments in power did not pay serious attention to it. Later, land reforms stopped appearing in the policy documents, and programmes for subsidising the poor became the new mantra. As a consequence, reservation in public sector employment and education became the sole major measure for the upward mobility of the historically marginalised social groups.

The shrinking of the public sector in the neo-liberal period has substantially reduced the scope of reservations. With the employment generating potential of the formal private sector reaching its limits, the large majority of new jobs created happen to be in the informal economy. Studies show that the informal economy has an inbuilt social screening by blocking the lower castes from access to remunerative jobs in the sector. The informal economy is socially regulated, as economist Barbara Harriss-White explains in her studies. The top tier jobs of the informal sector are socially reserved for the upper castes. With caste-based reservations in the private sector not in the near sight, the new economic reservation bill throws a challenge to the question of social justice.

The justification for ‘economic’ reservation is based on the fact that people with poor income needs protection from the state. As per the reports, the new bill envisages people from upper caste households with an annual income of 8 lakh or less to be entitled to reservation. This criteria, in effect, looks like an upward revision of the poverty line. However, income level grossly fails as an indicator of a household’s economic status. Recent research works, including that of French economist Thomas Piketty’s, show that wealth of the households is a more serious criterion for inequality considerations compared to income.

As economists say, income is a flow variable whereas wealth is a stock variable. Income is the flow of money which a household receive in the form of wages or other compensations per week or per month. Wealth is the total stock of physical assets the households own such as land, house, and car among others, at a point of time. Wealth itself is a source of income as you can give your land or house for rent or the holding of share/bond earns you interest. On the other hand, stable income over some time gives you the purchasing power to invest in assets.

In the Indian context, wealth inequality is historically and socially embedded. The social groups which occupied the lower end of the caste hierarchy were barred from owning land and other forms of wealth. Though land ownership at present does not wield significant power and status to the households like it used to be, land continues to be a major asset for the households.

In the context of growing urbanisation, land is fast becoming a speculative asset in the urban and peri-urban areas in the country. As the real estate market keep expanding its reach, the extent of land owned along with its value becomes an important factor in determining your wealth status. Even for those among the marginalised owning land, the subaltern locations of their settlements exclude them from partaking the larger benefits the real estate economy. Those who have marketable land can use it for off-farm income earning opportunities such as investment in children’s education among many other uses. Over time, this will only help to widen the existing inequalities.

The available macro data also underlines the more serious nature of wealth inequality in India. Access to assets by different social groups can be examined with the help of a simple measure—the ratio of the proportion of wealth owned by each group to their proportion in the total population. This ratio is an indicator of each community’s access to resources. To make matters simple for a common man reader, here is a simple example. Suppose the ratio is one for dalits as a group, this would mean that their access to wealth is proportional to their proportion in the total population. If the ratio is less than one, it shows that the group has less control over the assets considering their presence in the population. Now you can imagine what would be the case if the ratio is higher than one. 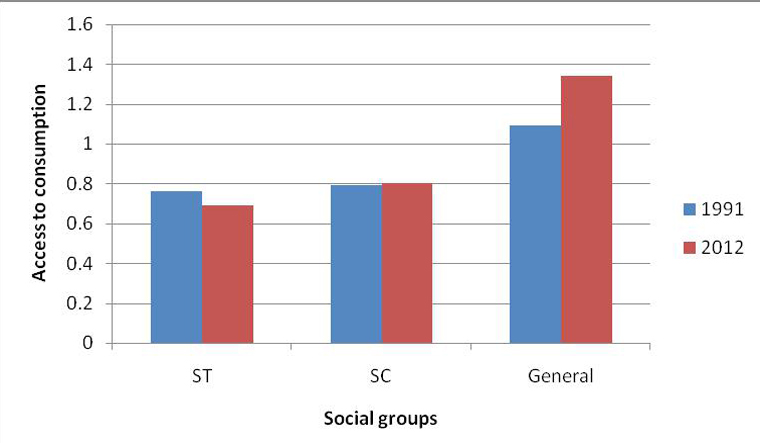 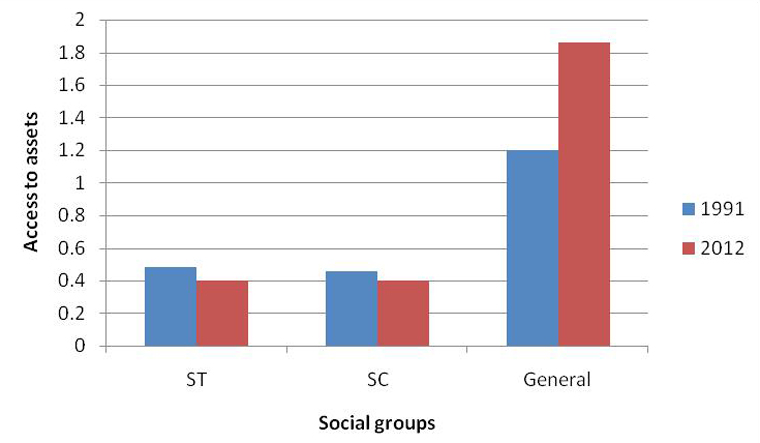 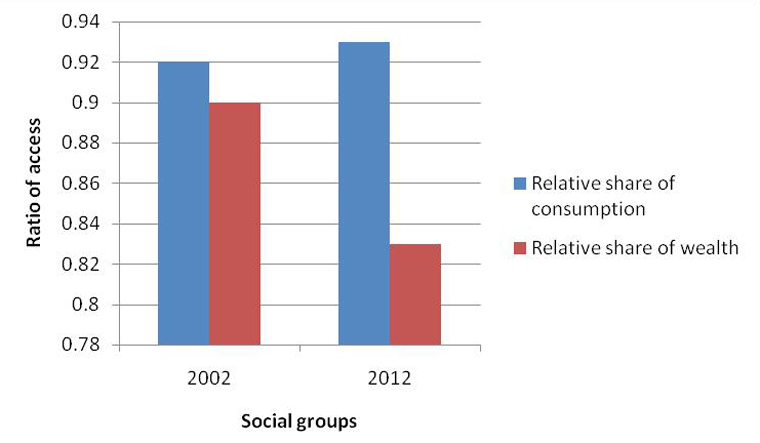 *Note: The data for OBC is not available for 1991 as it was not recognised as a category then

Figure 1, 2 and 3 show different social group’s access to total wealth (total value of land, buildings, vehicles, gold among many other assets). As you may notice from the figures, the ratio with regard to consumption is higher than one only for the general category. In the case of wealth too, this is the case. However, it may be seen that the distance between the general category and other social groups is pronounced when it comes to access to wealth. A comparison of what is happening to this ratio in the last two decades will give us a picture of the gainers and losers in the neo-liberal period. Regarding consumption, the Scheduled Tribes (ST) were the losers while dalits and OBC’s gained marginally (see Figure 1 and 3). The general category households seem to have witnessed a remarkable increase in their relative consumption. Regarding wealth, there is a clear diverging trend for the general category and the other social groups (see Figure 2 and 3). SC, ST, and OBC households lost out while the general category pocketed a substantial increase in their access to wealth in the neo-liberal period. The deprivation of STs seems glaring as it lost out both in terms of consumption and wealth.

A counter question can naturally arise, what about the lowest five per cent or 10 per cent households among the upper castes. Of course, the available evidence show that they also witnessed a decline in their share of wealth. However, this is natural in capitalism. Capitalism, as a system based on inequality, will witness centralisation of capital in the course of time. However, when the forces of capitalism interact with an inherently unequal social structure, the resulting stratification would only be to the disadvantage of those who occupy its lowest tiers. It is here that the role of reservations become more relevant. Let the caste-based reservation do its job by enforcing it properly in the public sector and extending it to the private sector.

Problem of poverty and low income

Reservation is not the answer for those who are left out in the march of capitalism. It is not a panacea for poverty and low income. Research done by Duke University professor Anirudh Krishna shows that poverty is created at the same time when it is reduced. While a set of people escape poverty, another set of people descend into it, and some keep trapped in it for quite long. Many scholars including Krishna emphasises the need for both preventive and supportive social policies to address the problem of poverty. New policies such as universal basic income, universal health insurance, and safety nets to overcome the adverse shocks such as a natural calamity need to be in place along with a strengthening of the existing policies. A serious addressing of the problem of poverty and low income calls for a going back to the welfare state.

Like a few millionaires among the dalits does not discredit the caste-based reservation system, a few people from the upper castes falling below a certain income level does not necessitate an economic reservation for them. While caste-based exclusions and inequalities will continue to be rampant and the reservation in the shrinking public sector fail to offer no respite for it, the so-called economic reservation will end up serving nothing to the disadvantaged classes. At the most, what it can do is to strengthen the middle-class among the upper castes which is not at all an outcome warranted.

C.R.Yadu is a researcher based in Thiruvananthapuram, Kerala