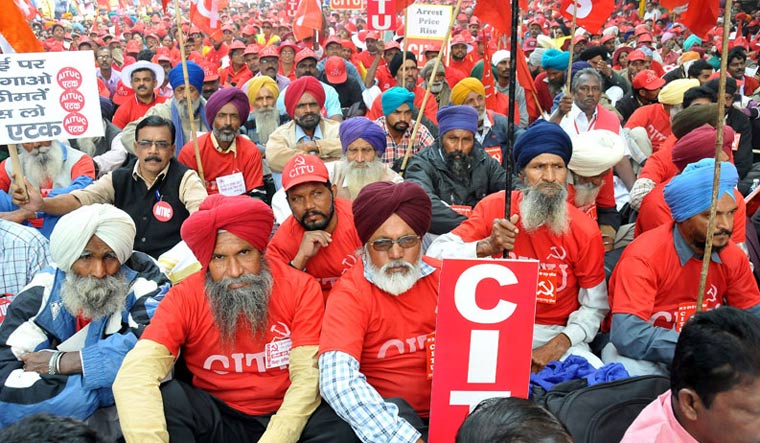 Trade unions in the country are gearing up to organise a 48-hour-long nationwide general strike on January 8-9, which they claim will be a “historic event”. “In the two-day national bandh of 2013, around 13-14 crore workers took part. This year, with employees from state and Central governments, along with various other sectors, the number is going to be more than that,” declares CITU Kerala state president Anathalavattom Anandan.

Ten major trade unions—including the All India Trade Union Congress, CITU, Indian National Trade Union Congress (INTUC), SEWA and LPF—have called for the two-day general strike to protest against what they describe as the anti-worker and anti-trade union policies of the Narendra Modi government. The decision to organise a two-day general strike from January 8 was taken in the National Convention of Workers held on September 28, 2018.

Employees in major sectors such as the Railways, banks and electricity departments as well as those in the unorganised sector, including street vendors and auto and taxi drivers, are expected to be part of the 48-hour strike.

The failure to fulfil the promise of creating over 1 crore jobs a year has been an important reason cited by the trade unions for organising the strike against the Modi government. According to Labour Bureau statistics, 1.55 lakh jobs and 2.31 lakh jobs were created in 2015 and 2016, respectively.

Adding fuel to the fire, a large number of small-scale industries were shut down, according to a statement of the National Convention of Workers. “Over 2 lakh small-scale industries have been shut down. A unit can consist of between 50 and 300 employees. People, who already had jobs, lost a way to earn because of this,” says Anandan. The statement also points to the loss of jobs—estimated to be 70 lakh—because of the closure of such industries.

Another major reason cited by the trade unions is the rise in prices of various daily use commodities. “The implementation of GST has further compounded the hardships. Even essential and lifesaving medicines have been subject to hefty GST,” the statement claims.

“We are not happy with the policies of the government. These policies are anti-working class, pro-capital but not (in favour of) employees,” says Ashok Singh, vice president of INTUC. The trade unions have accused the Modi government of having “malafide intentions” after a cabinet decision to amend the Trade Union Act of 1926 was announced recently. The unions fear that this will give a platform for the government to interfere in state- and central-level unions.

The trade unions are also critical about the constant ignorance of the 12-point charter of demands on issues such as minimum wage and universal social security. They also criticise the new pension scheme, the four modified 'employer-friendly' Labour Codes and introduction of fixed term employment. “Workers rise against the ruling government when we do not get what we are supposed to get. The cabinet has decided to recognise unions that work for the interests of the government, and not the ones that constantly raise their voice against it,” adds Anandan.

When asked about their plan of action for the coming months, Ashok Singh says, “We can wait for some time; after that, we will be forced to go on the roads.”

The All India Kisan Sabha has also called for a Gramin Bharat Bandh on January 8 and 9 against the “non-committal” stand of the Modi government on “farm loan waiver issue and rural distress”.