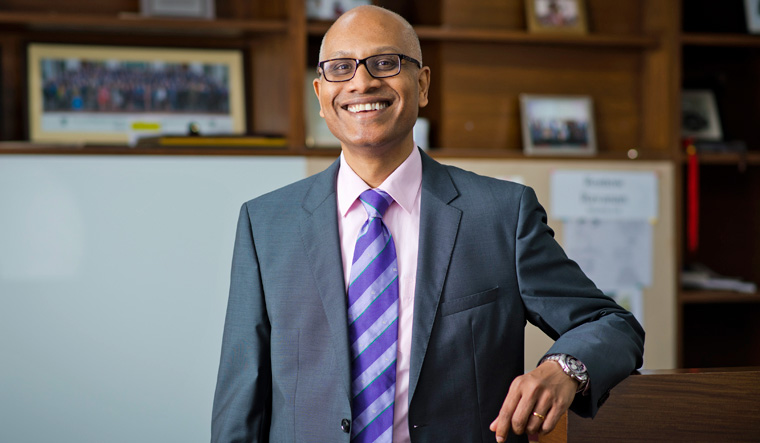 Rostow Ravanan is the CEO and Managing Director of the Bengaluru-headquartered mid-tier IT services company Mindtree. The company, having specialised offerings in the digital space, is poised to grow at around 14-15 per cent annually, much higher than the industry average of around 7-8 per cent. Ravanan, who is an alumni of the Harvard Business School (HBS) talks to THE WEEK about the overall scenario in the Indian IT services space, the importance of digital business space and why reskilling of workforce has become a very significant aspect at all levels in the IT services space.

Digital business is growing and it has become very important for Indian IT services companies to offer services around this space as customers are demanding specialised services around it. We were one of the earliest ones among the IT services companies in India to realise the importance of the digital business space. Our co-founder and chairman, Krishnakumar Natarajan, had already realised it in the year 2012 itself much before other IT services companies. Today, we are offering specialised services in the space and are getting almost 50 per cent of our business revenue out of our digital business offerings. The most important aspect is the impact a digital business offering creates in an organisation. By having a digital strategy, a customer can see remarkable improvement in their revenue growth and can change the overall scenario in the space. For instance, we had actively worked with the German airline company Lufthansa where we facilitated context-Relevant Travel Planning with Direct Booking API Functionality for them for richer travel experiences. Similarly, we have been working with many other customers in the US and Europe in the digital business space. We have also been actively working in different new futuristic technology areas such as artificial intelligence and machine learning, and have been creating a large ecosystem of partners including academic institutions and startups.

Off late there have been reports that a lot of customers are setting up captive centres of their own since they do not want to outsource their functions to third party service providers. Will it impact outsourcing to Indian IT services companies?

Captive centres have been an ongoing issue ever since the IT industry started in India. Companies such as Texas Instruments had set up their direct centre in India and others also followed. However, I feel that captives will not be able to solve all their problems themselves and they will have to outsource their requirements to IT services players like us. I feel an increase in the number of captives will not impact the business of Indian IT services companies and they will continue to witness growth as specialised work will still come to them.

Indian IT services companies have been grappling with visa issues and the pressure to hire locals in the US, and also setting up near shore centres there. What is your view about this?

I feel it is important to set up near shore centres so that the company is near to their customers and it is important to hire locals in order to serve the customers better, especially in the digital business space. For instance, we had set up near shore centres at Florida in the US long back. We had also acquired companies in the US and the UK that also increased our local workforce. In the US, more than 50 per cent of our workforce is local and that has helped our business there.

There has been a lot of talk that automation may take away jobs in the IT sector. What is your take on it?

I feel that introduction of any technology is bound to create more jobs and not kill them. We have witnessed such transitions and changes. For instance, when the internal combustion engine was introduced in England it was much faster and created a whole new set of jobs around the functioning of the engine. Similarly when the power looms replaced the traditional handicrafts it created new jobs around power looms. I feel that automation will create to new job roles as only the basic mundane jobs can be handled by machines and bots but high end specialised jobs will have to be done by humans. However, it is the need of the hour that each and every employee spends significant amount of time on reskilling and improving their skill sets and constantly work on becoming more specialised in their fields.

How do you foresee the future of Indian IT services companies and what are the opportunities ahead for them?

I feel that growth will continue for the Indian IT services companies as technology will move towards having more specialised offerings. At the same time, there would be some companies that will do well and some that will not do well. This is the case in any industry as some players do well and some do not do well. For instance, in the airline industry in India some players are doing well while some are bleeding, so this scenario will continue in the IT sector as well. Though business will keep coming in from the US and European markets, India will also grow with all the digital initiatives by companies and the government which will provide opportunities to the Indian IT services players.