Bandicoot is a spider-shaped robot that cleans manholes and sewages 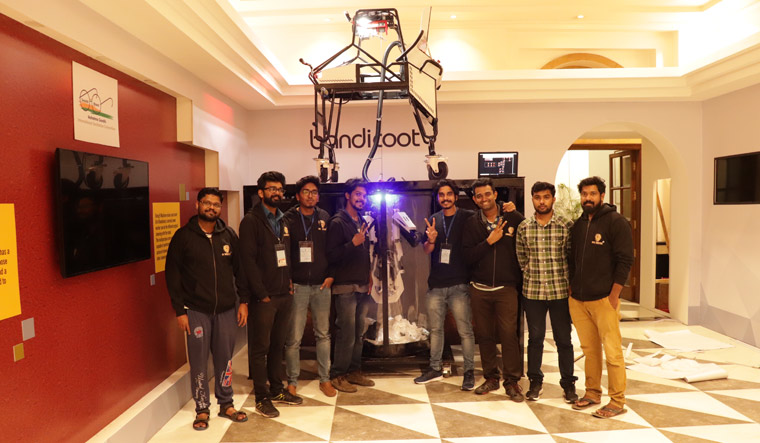 Genrobotics, a young startup from Kerala determined to fight the evil of manual scavenging and end sewer deaths, was honoured by Prime Minister Narendra Modi and UN Secretary General Antonio Guterres at the Mahatma Gandhi International Sanitation Convention on Tuesday. Modi and Guterres also launched the updated version of Bandicoot, a spider-shaped robot developed by the Genrobotics that cleans manholes and sewages.

Founded by four young engineering graduates—Vimal Govind M.K., Arun George, Nikhil N.P and Rashid K.—in 2015, Genrobotics was determined to solve the problem of sewer-related deaths in India. The team visualised a spider robot that would replace a human inside a manhole or sewer, and developed Bandicoot in 2016. The Kerala government officially launched the robot in February this year, ahead of the famous Attukal Pongala festival in Thiruvananthapuram. Soon, Genrobotics secured interests from other state governments.

"As we deployed the robot in new conditions outside Kerala, we were met with new challenges. Hence, we continued to experiment and bring in changes to Bandicoot. And now, we have come out with an updated version of the robot," said CEO Vimal Govind. Bandicoot 2.0 has upgraded to a smart operations assistant and also has a 7-machine vision to operate with surgical precision, claims team Genrobotics. "It has a sensor to identify poisonous gas emanating from the manhole. The smart assistant helps the user to operate the device more easily and helps in unclogging the waste akin to human arms," says a press statement from the company.

Higher resistance to corrosion and water, and a light-weight carbon fibre body are the other additions. The team now looks to collaborate with more state governments end manual scavenging across India.