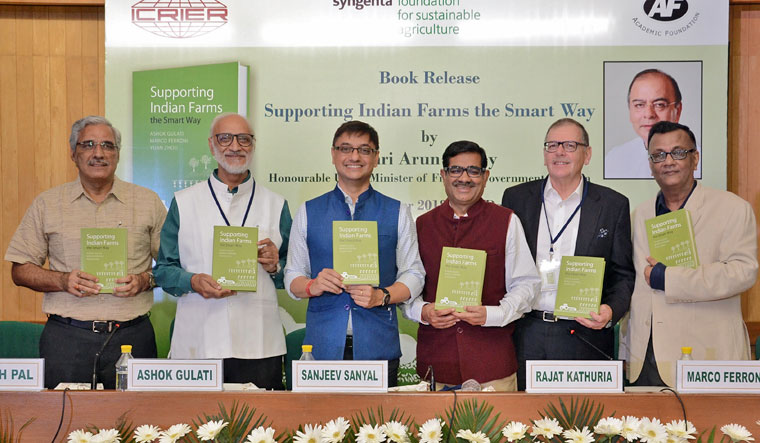 Ashok Gulati, Sajeev Sanyal, Rajat Kathuria and others during the launch of the book 'Supporting Indian Farms the Smart Way' | Aayush Goel

A self-sufficient farmer could be the one who can revive India's agriculture sector. At the same time, smart investments and smart policies to aid the distressed Indian farmer also need to be devised, summed up a newly released book.

The book 'Supporting Indian Farms the Smart Way' was co-edited by Ashok Gulati, former chairman of Commission for Agricultural Costs and Prices (CACP) and now Infosys chair professor of agriculture at the think tank, ICRIER.

Releasing the book, initially an academic paper, Arun Jaitley, Union finance minister said that the Indian government has taken a number of steps to support the farmers and the overall agricultural sector.

Based largely on international best practices and review of policies, the book recommends how to rationalise subsidies that can help India to achieve a higher agri-GDP growth, faster poverty reduction and ensure judicious use of resources like soil and water.

Among its key deductions, it suggests to rationalise India's fertiliser subsidies (worth Rs 70,080 crore), and instead switching over to a system of direct cash transfer on per hectare basis to farmers.

"This is absolutely critical, especially for urea, as this can stop over usage of scarce and costly fertilisers. This money could be instead saved to invest in modern plants producing cheaper fertilisers," said Ashok Gulati, speaking at the book release function today.

This book suggests that India should explore making investments on nitrogenous fertiliser plants in Gulf countries. The rationale is that natural gas, an essential component for making fertilisers, could be availed at a lower price of $3 per MMBtu compared to prevailing pooled rate of $7.5 per MMBtu in India.

Among key policy recommendations, the book suggests that having a price tag on water would check its wastage. Earlier, a number of studies concluded that India's farm sector is its largest freshwater guzzler.

A suitable water price can be used to recover the cost of setting up irrigation infrastructure by the state. At the same time, farmers should be provided unhindered and unsubsidised power, the study said.

The book calls for a 'serious review' of farm loan interest subvention scheme of the government, as it cited that farm loans are often used for non-farm purposes. Instead, the study laid stress on increasing usage of solar power in operating diesel pumps and other agri equipment.

The book also urges India's policymakers to consider solar power as a third crop for farmers.

Releasing the book, finance minister Jaitley said that Indian economy in last 25 years had done considerably well, and was thus able to generate investments for its farm sector. But now, he said, a different approach may be needed.

"I do see a point on blending the subsidy support with investment because to have a model which sustains indefinitely only on subsidy will not be a sustainable model," Jaitley said.

The finance minister said that investments will make the farm sector much less dependant on subsidies and more self-sufficient on the ground.

"With much lesser subsidies, a self-sufficient farmer may be able to serve the cause of Indian agriculture much better," Jaitley said, asserting that good politics is asserted by sound and rational policies.