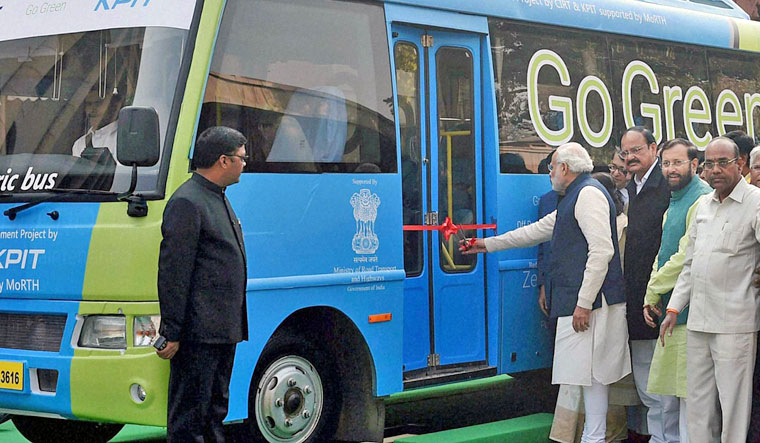 In India almost 7 crore people travel by bus, of this about 60 per cent are carried by state transport buses. Amidst this, a growing interest in procuring electric city buses have been questioned by those who feel that in the coming years, supporting infrastructure to feed these growing number of electric buses may not be available.

States have been driven in their interest for electric buses given the Central government incentives under the Faster Adoption and Manufacturing of Hybrid and Electric Vehicles (FAME).

Under the scheme, the centre incentivises 60 per cent of the total cost of the electric bus, and the rest is borne between the state government and the transport corporations. So far, more than 390 electric buses have been sanctioned in 11 cities across the country, said a report by World Road Institute (WRI).

Each electric bus had cost between Rs 1.7 crore to Rs 2.5 crore and the capital cost of inducting these vehicles are very high for city public transport fleets, despite the very high central subsidies.

“By bolstering their service with innovative technology, transit agencies can make public bus services more efficient, accessible and comfortable for all.”

Understanding the shortcomings, WRI India Ross Centre for Sustainable Cities along with logistics major, FedEx have launched a 'Better Bus Challenge'. FedEx have committed a $200 million funding to WRI for this programme and others worldwide to improve transport systems.

The challenge will address one of three categories: Operations Management and Efficiency, New Service Models, and Commuter Experience. The ‘Better Bus Challenge’ will offer the top three solutions a financial award of USD 50,000 or INR 32,00,000 each.

The cash reward will be supplemented with a year-long mentorship to collaborate with transit agencies to design and implement solutions which cater to the needs of cities.

In Mumbai, ridership in public buses have declined, said Victor Nagaonkar, an OSD to Brihanmumbai Electric Supply & Transport (BEST) undertaking. "There are capacity constraints in Delhi, but in Mumbai the growing number of taxis have led to a shift from buses," said Nagaonkar.

In states like Himachal Pradesh, which has recently placed an order to procure 25 electric buses, chief general manager of Himachal Road Transport Corporation, H.K. Gupta, said that for charging infrastructure there was a high dependance on third-party technology, which have compounded costs.