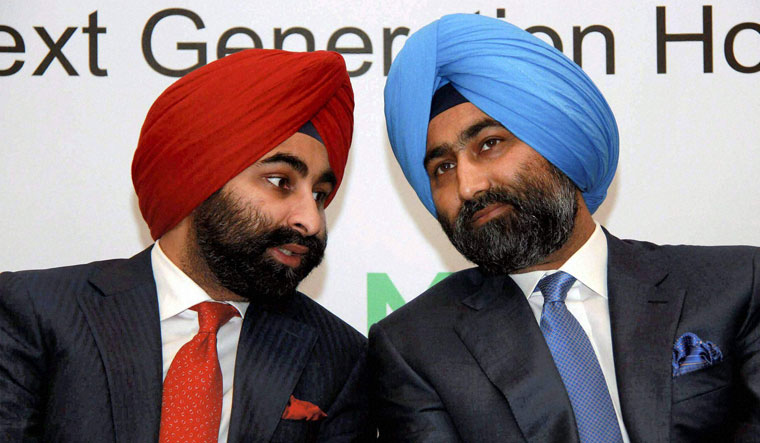 They have not answered why they let the crisis happen, in the first place.

They even said they would not leave the country, like many have done recently. They did not say efforts to raise more cash from public sector banks in the last one month failed totally. But no bank was keen to offer cash to the financially-plagued healthcare giant.

But the Finance Ministry is clearly not pleased and some vigorous lobbying by the Singh brothers has had no effect on the Ministry which has not assured anything to the brothers, who even addressed a presser in the Indian Capital this week to highlight why they feel the problems plaguing their company are complex in nature and cannot be solved overnight.

“We wish to say that given the circumstances and immense challenges facing us today, we assure all our stakeholders that we are doing whatever it takes to resolve the issues and will not shy away from current responsibilities,” the two said in a statement.

But the government, worried that the Fortis issue could add one more to the ever bulging kitty of business gone wrong because of promoters' greed, is not ready to give the Singh brothers any lenient hearing. The Serious Fraud Investigation Office (SFIO) is inquiring into cases of alleged siphoning of funds by Fortis Healthcare and Religare Enterprises by the Singh brothers. In an exchange filing, two truckloads of documents have been sought from the duo by the Registrar of Companies for Punjab and Chandigarh by March 3, 2018. The deadline is zooming close and if the RoC does not get the papers, Singhs would not remain the Kings for long.

In Mumbai, the National Stock Exchange (NSE) said all existing F&O contracts will expire on March 28, 2018, and no fresh contracts will be available if the firm fails to submit results for quarters ended September and December 2017 by March 1, 2018. Fortis Healthcare has sought time – two weeks – to declare earnings citing statutory auditors' inability to complete the audit before the stipulated board meeting. They have not explained why the auditors failed to complete the audit, raising speculation of illegal cash transfers to promoters without the notice of the shareholders, Securities and Exchange Board of India (SEBI) and NSE.

A senior SEBI official said he would not be in a position to comment on the case as the matter was sub-judice.

The investors trust, claim those in the know, has been totally eroded because of past actions at Fortis Healthcare, plagued with frequent resignations, restructuring and complaints about the day to day operations at the healthcare group.

In what looked to many like a l'affaire Satyam, Fortis Healthcare recently admitted having deployed Rs 473 crore with companies that became promoter owned companies by terming them as “secured short-term investments in normal course of treasury operations”. Strangely, this is not the first time Fortis has utilised company funds to fund promoters’ own business interests.

Last week, a Bengaluru-based proxy voting advisory firm, InGovern Research Services Private Limited, said the following: “The issue of transferring funds to a wholly owned subsidiary which in turn lends to promoter entities, in order to skirt the shareholder approval requirement, seems to be a blatant fraud. Much like the Satyam cash, the cash and cash equivalents on the books of the company seem to be non-existent. The company’s subsidiary has conveniently given the loans to related parties without seeking shareholder approval and regulatory filings.”

“SEBI has instituted an investigation and has reached a logical conclusion on the basis of Companies Act and Listing Obligations and Disclosure Requirements (LODR) Regulations. The statutory auditor has a responsibility to the shareholders and should have reported to the regulator the reason for not signing off on the second quarter (Q2) statements,” said InGovern in its report.

InGovern said further: “If Fortis had made these advances directly to the promoter entities, it would have required minority shareholders’ approval through a special resolution and there was a high probability that the resolution could have been defeated. However, by routing the advances through Fortis Hospitals Ltd, a wholly-owned subsidiary, Fortis did not bother seeking shareholders’ approval and also did not have to even make a public disclosure about the transaction. Although the 2017 annual report of Fortis mentions a related party transaction with the subsidiary, there are no details till today of the ultimate beneficiaries. The link to the subsidiary’s financial statements in the company’s website throws up the statements of another subsidiary namely Fortis Hospotel Ltd.”

Finance ministry officials say Fortis said “deployed” funds in secured short-term investments with promoter entities in normal course of treasury operations. So this should be classified as current loans and advances and reflect on the assets side of the balance sheet. But the consolidated balance sheet of Fortis shows a cash and equivalents amount of Rs 544 crore in 2017 compared to Rs 142 crore in 2016. Asked InGovern: “Has the company classified the advances of Rs 473 crore as cash & equivalents? If yes, shouldn’t this be considered as a violation of the Indian Accounting Standards?”

InGovern also drilled the statutory auditors for not reporting the fraud to government as mandated under Section 143(12) of the Companies Act. SEBI (LODR) Regulations require quarterly financial results to be published within 45 days of the quarter ending date. It says, “The statutory auditors Deloitte Haskins & Sells have a responsibility to the shareholders and should have reported to the regulator the reason for not signing off on the Q2 statements. The auditors should also have flagged off the entry of advances to promoter entities as cash and equivalents in the consolidated balance sheet of Fortis. On basis of Section 143, isn’t it the responsibility of Deloitte to report this fraud to the Central Government?”

This is not all. Let us see what did Fortis say when it skipped the Q2 and Q3 results, the brothers offered a totally absurd rationale that the board was busy deliberating acquisition of certain Religare Health Trust’s assets and stated the results were to be taken up in the Board meeting on February 13, 2018. The meeting was held but the quarterly results was not finalised. Now, an extension has been sought till February 28, 2018. A livid SEBI, no wonder, has pushed in an investigation, seeking Fortis to furnish information by February 26, 2018.

No wonder the brothers are panicking. Because in the past, Fortis had transferred company cash to fund promoter’s personal business.

InGovern even compiled a list on similar transactions carried out by Fortis:

• In 2010, Fortis Mauritius, 100 per cent subsidiary of Fortis acquired 25 per cent in Parkway Holdings Singapore

• Gradually, the promoters came to own 100 per cent of shareholding in RHC Healthcare

• As per Fortis Healthcare, Fortis International paid $580 million for the acquisition

• Here, a question is what happened to the loan of Rs 395 Crore given to Fortis Mauritius?

• If this loan was indeed out of Fortis Healthcare’s FCCB proceeds of $100 million, it was a clear case of FCCB funds being diverted to fund promoters’ private businesses

Finance ministry officials in Delhi said they are evaluating seriously the InGovern report which said frequent restructuring create confusion and sometimes, are catalyst to destruction of shareholders’ wealth in any company. “A look at the recent history of Fortis will show that its promoters love restructurings and have treated the company like a game of Lego,” it added.

The company, it is reliably learnt, appointed independent directors as if there is no tomorrow. As a result, noted InGovern, there has been a high turnover of Independent Directors, no one was appointed with any logical explanation.

InGovern said the issue of diversion of funds from the company was not limited to Fortis alone. The auditors of promoter group’s Religare Enterprises (Religare) have also qualified its Q3 financial statements for similar issues.

“Statements by the company auditors make it clear that the modus operandi of Religare been the same as of Fortis in the matter of movement of funds to Group companies. Instead of advancing loans themselves, both Religare as well as Fortis have routed the funds through subsidiaries; Fortis through Fortis Hospitals Ltd and Religare through Religare Finvest Ltd. This has helped them avoid seeking shareholder approval. Also, Religare has tried to keep these irregularities under radar by not conducting any impairment study on Religare Finvest Ltd,” said InGovern.

Arguing it was unfair for InGovern compare Fortis Healthcare with companies like Satyam and UB, Fortis said the report, instead of providing a fair view has instead stated events that have taken place as way back as 2010. “The company has and will continue to fully co-operate with all regulatory authorities and continues to furnish all information as required by them,” Fortis said in a press note.

The Finance Ministry officials are not responding. First, Fortis must comply, only then they will reply. Till then, the brothers will have to live in some heat.