Legazpi, the hidden gem of Philippines 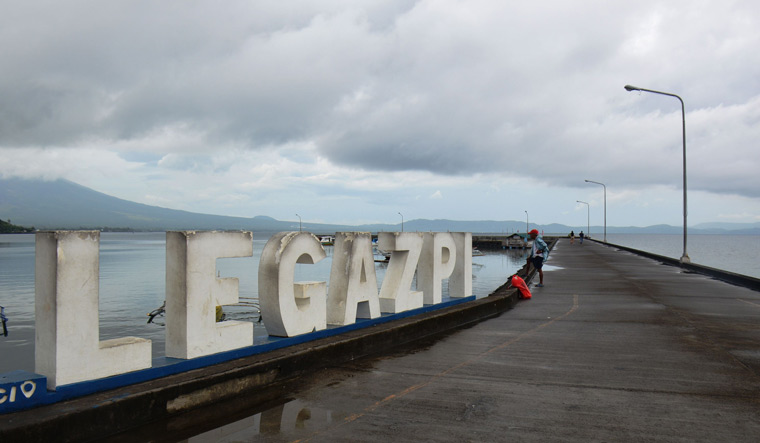 Legazpi is a Filipino haven for whale shark interaction, firefly watching, eating chilli ice cream and visiting the Church of Our Lady of the Gate and Cagsawa.

“Jump ma’am jump,” said my butading interaction officer (butading is the Bicol term for whale shark) softly but persuasively as I sat on the ledge of the fisherman’s outrigger boat. I jumped right into the waters of the San Bernardino Strait. I had on a life jacket, snorkeling gear and flippers and held onto the lifeguard rescue can which the officer maneuvered effortlessly.

“Ma’am now put your head inside the water,” he instructed a few seconds later. Once again I complied and immediately saw a magnificent whale shark swim right in front of me. It was my first whale shark interaction and Donsol in Philippines had been kind. For a few minutes, I marveled at the beauty of the largest species of fish before heading back to the boat. It was an adrenaline rush seeing her 2 feet away from me.

I babbled at the grace with which the whale shark swam, how she ignored us and how this would be a once in a lifetime experience. The officer, spotter who had spotted the whale shark and two fishermen responsible for steering the boat heard me out, quite used to similar reactions from visitors who choose to experience this activity.

Before getting into the boat, visitors are briefed and shown an orientation video at the registration centre. Throughout the activity they are accompanied by the whale shark interaction officer and spotter. Visitors cannot touch the whale sharks. This is an ethical activity because the sighting is kept natural and the whale sharks are not fed to increase their sighting.

Still excited from my aquatic quest, we drove back to Legazpi for another adventure—this one being a fiery culinary challenge. We stopped at a shop called 1st Colonial Grill which is the pioneer of Sili ice cream. Bird's eye chilly or sili as it is locally known in Legazpi is used to make this blazing handmade ice cream. There are four levels ranging from level one which is mild to level four which is known as the Oragon volcano level.

Whale shark interaction; The Church of Our Lady of the Gate | Khursheed Dinshaw

Whale shark interaction; The Church of Our Lady of the Gate | Khursheed Dinshaw

“For level 4, half a kilo of chillies are used to make a few scoops. Cream, coconut milk, sugar with chillies are whipped together to form this ice cream whose tagline is: I am hotter than you think,” added Rowena Aspe who has curated sili ice cream. While level one is light pink in colour, level four progressed to dark pink and true to its tagline is an eruption of spice in the mouth. The trick to appease the raging taste buds is to immediately drink cold milk.

Rowena has also curated other unusual ice creams that are made from taro, moringa, cucumber, corn, ginger and burnt rice. Each of these ice creams' main ingredient is indigenous to the provinces around Legazpi and is an endeavour to highlight that region. A new flavour called carmelado was introduced on May 27 this year and tasted like our Indian malai kulfi.

I had enough adventure for a day and at night opted for soothing firefly watching on the Ogod river. In the solitude and dark of the night, our fisherman’s boat glided on the river. The fireflies on the trees on the river bank welcomed us to their territory. Some were solitary while others were in groups. The trees came alive with their flickering bursts of light. A solitary spark here or a congregation there in synchronised rhythm lit up our surroundings.

The next day I walked on the boulevard of Legazpi which has earned the moniker of boulevard of broken dreams because unrequited promises of marriage were made on it. “The boulevard sees joggers and walkers early in the morning while the fitness vibe is replaced with satiating hunger pangs and chilling out in the afternoon at its cafes. The city’s triathlon is also conducted here,” added Liziel Mascarinas, a local guide who accompanied me. 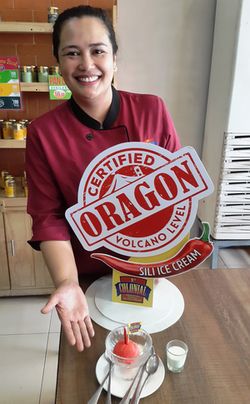 The town of Cagsawa is a short drive from Legazpi. Founded in 1887, this town was buried under the eruption of Mayon Volcano on February 1, 1814. Today the still standing bell tower is an iconic example of the resilience of its people. Souvenir shops line the bell tower complex and sell abaca bags, printed t-shirts, lava rock fridge magnets and chilli chocolates.

On the way back from Cagsawa, we stopped at The Church of Our Lady of the Gate to pay our respects. This church is also known as the Church of Daraga. Part of it was declared a cultural treasure and it has Mexican and renaissance architecture. Its feast falls in the month of September. A local Filipino tradition of the area has women bringing pieces of rocks while men pile them around the church to symbolise joint effort and faith.