On the Tudor trail in England 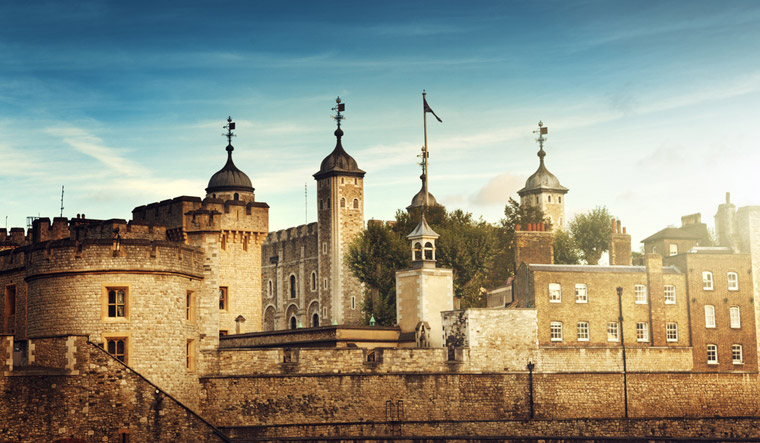 The Tower of London

On my flight to London many years ago one of the in-flight entertainment options was a film The Other Boleyn Girl, the story of the two sisters, Mary and Anne, who king Henry VIII of England bedded in turn in the early 16th century. In the film, Mary was his true love, but he got Anne on the rebound, married her and had a daughter by her who was later to become Queen Elizabeth I.

In England I was staying in the Kent countryside, close to the Hever Castle which was Anne’s home where Henry courted her. A visit to the castle had a retelling of the story of the second king of the Tudor dynasty thrown in. As if that was not enough, in the evening when I switched on BBC, they were showing a series on, what else but, the Tudor dynasty. By the time I left UK, five days later, I had the Tudors popping out of my ears, but there is something so fascinating about this family that, at my next stop in Freeport, Illinois, I went to a public library and the book I picked up was none other than Six Wives – the Queens of Henry VIII by David Starkey.

The story of the second Tudor king, and of the family in general, has all the elements of an exciting soap opera. He married six times and second of these nuptials led to England’s break with Papacy and setting up of the Church of England. He beheaded two of his wives, divorced another two, saw one die soon after child birth, with the last surviving him and marrying again, the fourth time for her. The story has high politics, drama, conspiracy, deceit, miscommunication, excommunication, in-laws, outlaws, proxy weddings, violence, romance, adultery and wars. Seldom has so much action been packed in the lives of three generations of a family and none other has had as much impact on history either.

It all began in 1485 when Henry VII won the 20 year War of the Roses, and then got his elder son Arthur betrothed to Catherine, daughter of Ferdinand, the ruler of Aragon, in Spain. The groom was only 15 and the bride a year older. A few years after they got married, Arthur died of testicular cancer and the question whether the marriage had been consummated became the pivot on which England’s history turned.

It was decided to continue the alliance by getting Catherine married to the younger sibling, Henry. A special Papal dispensation had to be obtained to enable the new heir to the throne, then 17, to marry his brother’s widow. The presumed absence of consummation, which was the subject of several missives between London and Rome, was a key factor in obtaining the Pope’s consent.

Soon after, the founder of the dynasty died and the second son became king as Henry VIII. As soon as he reached adulthood the royal eye began to wander. Catherine gave him only one daughter and miscarried six other pregnancies. Her looks deteriorated and one Anne, daughter of Thomas Boleyn, resident of Hever in Kent, caught his fancy. In the film it was her sister Mary that the king fancied more and even had a bastard son by her. But she was already married. And even getting Anne was not easy because Henry was already married to Catherine. The Aragon ruler had the Pope under his thumb and would not allow him to grant dissolution of her marriage.

Henry contended that marrying his brother’s widow was sinful and therefore illegal. Now new evidence was sought to be put forth that his brother had actually consummated his marriage, making Henry's subsequent wedlock invalid.

For six years Henry pursued the matter, but when the Pope still did not agree, he decided to break connection with the Roman Catholic order, proclaim a new 'Church of England', with the king as its head, appointed a new Archbishop of Canterbury and had him annul his marriage with Catherine.

The wedding with Anne Boleyn followed quickly. But she, too, could not give him the son that he desperately desired; only a daughter—Elizabeth. Henry soon wearied of her, but what was worse were reports he received that the queen had committed incest with her own brother. In the film, the source of the rumour was the brother’s estranged wife. That was enough for the king. He had both the queen and her sibling beheaded at a spot so marked for posterity in the Tower of London.

Queen number three was Jane Seymour. Henry married her on the day of Anne’s execution. She was a bit of a plain Jane, but gave Henry what he wanted most, a son, Edward. When it happened, she promptly wrote to her husband that she had given birth ‘to a prince, conceived in most lawful matrimony between my lord the King’s majesty and us.’ She however, died soon after childbirth and for once a disconsolate Henry did not have an affair overlapping his marriage. ‘The machinery of love on the rebound,’ writes Starkey, ‘did not come into play and the post of the queen lay vacant.’

But the Tudor stud could not remain celibate for long. A political alliance was arranged with the Cleves of Flanders and their daughter Anne became the fourth queen. Unfortunately, Henry had not seen his bride before he got married, and what he saw he did not like. The marriage was probably not even consummated and soon after the new wife was persuaded to agree to a divorce.

Meanwhile Henry’s ‘notorious eye had started to rove again’ settling on Catherine Howard, almost 30 years his junior who he found most accomplished in bed. Writes Starkey, ‘Henry, lost in pleasure, never seems to have asked himself how she obtained such skill.’

She continued her dalliances even after she hitched up with Henry. The king was now getting old. His first daughter was older than his new wife. His sexual drive too had suffered. And when he came to know of the new wife’s extracurricular activities, he exploded in rage. Once again, he had both the queen and her alleged lover beheaded.

To make sure that no subsequent wife came with a baggage of past affairs, Henry promulgated the Act of Attainder whereby concealment of past illicit liaisons was made an act of treason for any future queen, punishable by death.

Such was the state of the contemporary English society that it became difficult to get another bride after this law was enacted.

But Henry still managed his sixth wedding. The new queen was Catherine Parr, herself twice widowed. He almost fell out with her on the religion issue, but the situation was saved when the king himself, after suffering long from an ulcerated leg and other ailments died in 1547 at 55.

His widow out-Henryed him and got married once more, to a former lover, Thomas Seymour, brother of Jane, the third queen. Rumour has it that she once caught her new husband in bed with step-daughter Elizabeth. She, too, died soon after giving birth to a girl.

Henry’s son, Edward, still only nine, succeeded him. He ‘ruled’ for six years before succumbing to tuberculosis. His major claim to fame is as the subject of the famous story Prince and the Pauper.

He was followed for a few days by Jane Grey, a distant aunt, put up by a cabal that wanted to keep elder step-sister Mary out. They failed. The ‘queen’ ended up as a prisoner in the Tower of London, and her supporters divested of their heads.

Mary, who became queen next, tried to take England back to Roman Catholicism, since the break was what had made her own birth illegitimate. She even married Philip of Spain in a bid to repair the religious breach, but died soon after a second miscarriage in 1558.

She was succeeded by the last surviving child of Henry VIII, Elizabeth. She made sure that the severance with Rome was complete, because if the Papal view was correct then Mary was the legitimate child and not she. The religious character of an entire nation was thus determined by the matrimonial conundrum of one king and the tussle between his daughters.

Elizabeth I reigned for nearly 45 years as the supposed ‘virgin queen’. Her life was no less dramatic than her father’s. England is dotted with monuments of this fascinating era. Following the Tudor trail with a history book in hand would be an exciting way to tour the country.