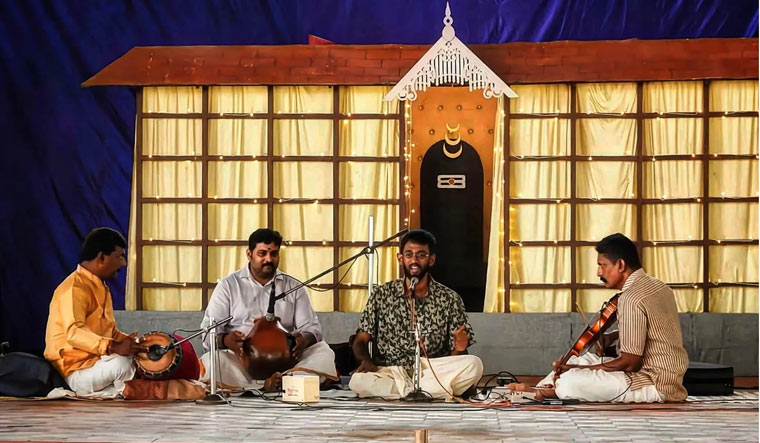 Listening to ‘Akasha’, a song released as part of the musical short film, Metagod, is a jolting experience. It starts with a classical piece that morphs into electronic music. The blending is so seamless it does not feel like you are listening to music from starkly opposite ends of the spectrum. Still, it leaves you unnerved, like you entered a portal into a different world, one that tilts dangerously on its axis and threatens to empty you into an unknown abyss. For all its dark matter, the song is liberating, perhaps because it does not follow any rules and encourages you to do the same.

“I used vocal cultural elements of western classical and Carnatic music and then sang the composition over electronic music,” says Neelakantan Indanthuruthil Krishnan, one of the composers of the song. He sang it with another vocalist, Priyyank. “Throughout the ages, music has mutated. In my opinion, its future is inside computers.” Technology, he says, has changed Carnatic music as well. “I feel like I am creating new ways of encouraging others to get into classical music,” he says.

Krishnan, 29, was born into a family of musicians. He was trained in classical music by his mother till the age of 14 and after that, by her guru. In school, he got introduced to western genres like jazz and metal. In Class VIII, he became the vocalist in Flood of Mutiny, a band he formed with his friends. When he started neglecting his studies to be part of the local music scene, he knew this was no time-pass, and that he wanted to take up music professionally. Being from a south Indian family, however, he was persuaded to first complete his bachelors and masters in political science from the Maharaja Sayajirao University of Baroda.

Afterwards, he moved from Baroda to Mumbai and worked on small, independent music projects. It took him two years of research – when he intensely studied the works of electronic musicians from 2000 to 2015 – to understand the rhythmic patterns and melodic cycles of this genre. He would practice for three hours daily. He did not find it a struggle to move from classical to fusion. “When you think out of the box, you always take the road less travelled,” he says. “If things are getting difficult, then you know you are on the right track.”

‘Akasha’ happened when Metagod’s director and producer Paresh Vijay and Anand Iyer wanted to remix the song with an electronic focus. They got introduced to Krishnan’s music on Instagram and were impressed with the ability of his voice to straddle both eastern and western styles. He was invited for a discussion in February. It took over four months to complete the recording. The song came out on December 22.

Krishnan first performed in a concert at the age of six. He remembers an embarrassing mistake, when he sang the opening line and then forgot the rest of the lyrics. He stretched the note for two rhythmic cycles before his mother realised that he was lost. She came and whispered the next line to him. “What I remember about that incident is how quickly I made a recovery,” he says with a laugh. “The way I picked up the lyrics felt like I was an experienced singer. The mistakes I have made are the reason that I am here. They have taught me how to move ahead in life.”

His creative process involves long discussions with his producer, where they might draw inspiration from anything around them, from the sound of construction to traffic. The world has moved on from being just about one character, he says. People can make music about the smallest things like buttons or keychains. To survive in this atmosphere, one must expand one’s horizons. Krishnan builds on what his producer creates on the digital audio workstation. “In classical music, you move with how the sound gravitates,” he says. “You move around the musical framework you are given, explore the tune for a while till another idea or element strikes, and you add that to the existing framework. You build on it like Lego blocks. This background helped me a lot in the improvisation process.”

In the future, what he wants most is to become a global ambassador for Indian classical music. In this, he is trailing musical greats like Ustad Zakir Hussain, flautist Hariprasad Chaurasia, sarod musician Amjad Ali Khan and sitar maestro Pandit Ravi Shankar – people who “displayed their music to the world without changing their core values”. But the sonic terrain that Chaurasia or Hussain traversed is far different from the one that exists currently. Music has taken another quantum leap, so much so that ‘purity’ in music might need a rethink. That is why Krishnan is most inspired by sitar player Anoushka Shankar. He studied her discography and dynamic marking (the extent to which a note is going to be played) for months. “I love that she does not have any boundaries,” he says. “She is not limited by the belief system that you must keep music pure. Purity comes from sharing your knowledge. The more you share, the purer your music becomes.”