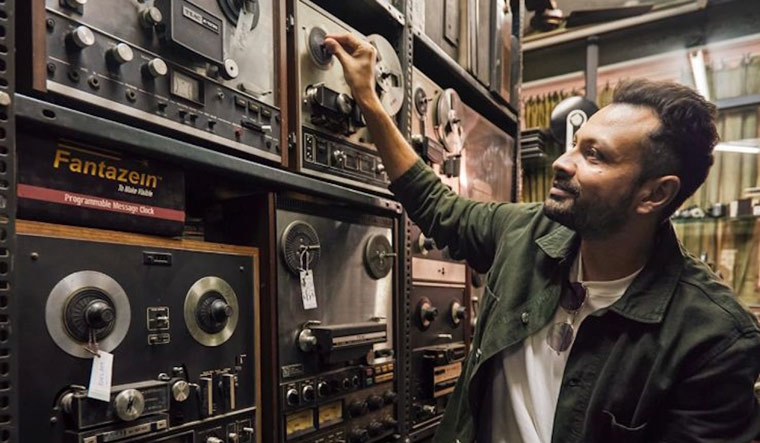 From how temple prasadams came into being to simplifying Karnataka's famous Maddur Vada recipe, Rakesh Raghunathan knows how to showcase the rich culinary practices of south India in all its intricacies. He seeks to turn the spotlight on the custodians of traditional knowledge systems. A food raconteur, armed with a wealth of anecdotal history, and a deep insight into socio-cultural practices, Rakesh has taken food to the realm of the performative. His travels have taken him to far-flung nooks and corners of south India’s towns and villages, to discover a vast repertoire of indigenous food and a whole body of culinary knowledge and practices. His travels are now documented in the form of popular television shows like 'Dakshin Diaries’ and '100% South Indian' on Living Foodz and Zee Zest channels as well as 'Sutralam Suvaikalam' for News7 Tamil. The food historian speaks to THE WEEK on the release of his new show 'Highway Dreams' on Zee Zest.

When did you decide to document the regional multi-dimensionalities of South Indian food?

The time when I decided to document the regional multi-dimensionalities of South Indian food was when I was in the US for my bachelors. I used to crave for home food that I used to have back at home. Although I had all the ingredients when I was living in the US, whenever I used to try to cook them, it never really tasted the same. And when I came back home, I started to travel to small towns and villages and documented everything that I could possibly get from each place I went to.

Several restaurants in north India, at least in the capital, have begun offering region-specific south Indian dining. Now restaurant-goers actually don't think in terms of idli-dosa-sambar. Still, what are some of your complaints against the way south India cuisine is served in commercial establishments of Delhi, Bombay, Kolkata? What are they missing?

In regards to this question, I wouldn't say that I have any complaints of any sort but it starts with the pronunciation first, like how people pronounce the wrong name of the dish. Also, in general if I talk about how a sambar is made, it is totally different from how it is made in other metropolitan cities when compared to South India. For instance, in South India there are different kinds of sambar for each meal like for breakfast it is made with moong dal, whereas for the lunch sambar is made with toor dal and will not have tomatoes in it. From my understanding, I believe that the metropolitan cities have broken the stereotypes of South Indian food but to understand the nuance behind the South Indian food is miles to go.

Tell us about your travel show 'Highway Dreams' and what it seeks to achieve for viewers who do watch several shows and YouTube videos and Instagram reels already?

'Highway Dreams' is an eye opener for me, being a South Indian food historian who has documented recipes and culinary practices from across 4-5 southern states. After 'Highway Dreams', I am looking at my own state through various lenses that I have never seen or done in the past. For instance, I am in Chennai and Kovalam is exactly 45 - 60 minutes drive from where I live. Surfing is something that I always wanted to do but was never able to do, but because of Highway Dreams I was finally able to. Again, if I look at my home town Kodaikanal that is one of the hill stations and the avocado farming that happens there at the mid level of the hills, which I always knew, but to see an avocado plantation was something very unique for me. Adding up more to my experience, when I was bird watching at Tertanggal, that is in Ramanathapuram, a district in Tamil Nadu, and at that time I was also engaging with one wildlife enthusiast and photographer and the experience that I had there was incredible.

Can you share some interesting anecdotes you unearthed while documenting temple food in Tamil Nadu?

While documenting temple food in Tamil Nadu, I came across with the idea of temple food which has always been served according to the season and grown locally. People bring seasonal food to the temple and the people from the temple use it and give it back to the people, which we call "Prashad". In today's era, we talk about sustainability and seasonal food but back in the days this was actually the norm that people used to follow, especially in the case of temple food.

Any interesting chefs you would like to highlight? Someone who would not find his/her way to the limelight but is doing incredible work?

If I talk about inspirational or incredible work then I would say it's not only limited to the chefs. I draw inspiration from the people who have been culinary custodians of the recipes that have been passed on from several generations. People who actually volunteer to give you wealth of information to whom anyone asks them or if anyone wants to document any recipe, they will help them. So it's not just chefs but the people who love cooking and are experts at it.

What has been your latest outing at the intersection of food, history and memory?

The latest outing at the intersection of food, history and memory was when I was shooting for 'NEXA Journeys Presents Highway Dreams'. There are so many instances that can be shared. One thing that I still remember vividly was about Chettinad, the antiques and how it made its way into Chettinad. Although, Chettinad is one hub where all the woodwork is done. Another thing that I remember was when I was in Kovalam, Chennai, where Arun Vasu adopted the entire fishing village and gave opportunities to the fishermen community and set up a surfing school that is run entirely by the local community. I mean, there are so many things and experiences after 'Highway Dreams' and talking over one single experience won’t be justifiable.