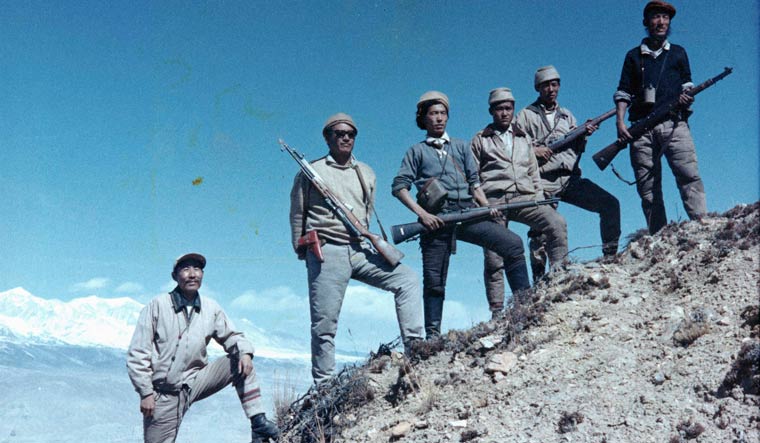 Lhamo Tsering and others posing at a hillside

Camp Hale, once a US army training facility in the Colorado mountains, also served as a top secret spot for Tibet operations, code-named STCIRCUS where the CIA trained around 250 Tibetans in spycraft and guerilla warfare in the 1950s and 60s. Recent refugees from Tibet, the trainees would eventually be parachuted back to Nepal and Tibet as resistance fighters. In an exhibition titled 'Shadow Circus', as part of a parallel event of the recently-concluded India Art Fair, several unseen records, documents and images were showcased from a turbulent chapter in the Tibetan independence movement, including artworks from Camp Hale.

The Tibetan trainees at Camp Hale were addressed with names like Pete, Rocky, Lou and Larry. Apart from radio operations, guerrilla warfare and intelligence gathering, the trainees were also given lessons in photography, parachuting, geography, mathematics, political science and art. The refugees fell in love with the place and shared a bonhomie with their CIA trainers.

"They had art classes, which were designed for psychological assessment purposes, but which the trainees took to with pleasure. Many of them loved to draw, and created several charcoal and crayon drawings that recalled their homes and the traumatic events they had recently fled from. The CIA took advantage of their artistic skills to create numerous propaganda cartoons that were disseminated both among the exile community and in Tibet to keep morale high and maintain public sentiment against the Chinese occupation," reads an exhibition note, right next to the crayon drawings and cartoons drawn from the voluminous personal archives of one of the resistance fighters, Larry, or Lhamo Tsering.

Several other artefacts from this fascinating period in Tibetan history were on display at the India International Centre in New Delhi till May 1.

The inaugural version of 'Shadow Circus' was curated by Natasha Ginwala and Bonaventure Soh Bejeng Ndikung with assistant curator Krisztina Hunya. It was also shown at the 69th Berlinale in 2019. This was the first time that 'Shadow Circus' was on view in India.

Archive-based art exhibitions are crucial to revisit history which is rarely a straightforward narrative with clearly designated winners and losers, friends and enemies. Individual archives offer a deeper look at the inner struggles and contradictions which fail to manifest in public records. This recent exhibition, driven by the personal archives of a key figure in Tibetan resistance against Chinese occupation, enlivened a now forgotten chapter in Tibetan history. 'Shadow Circus' thoughtfully revisited a period of Tibetan armed struggle which ended quite abruptly in the 1970s and took a more non-violent turn. 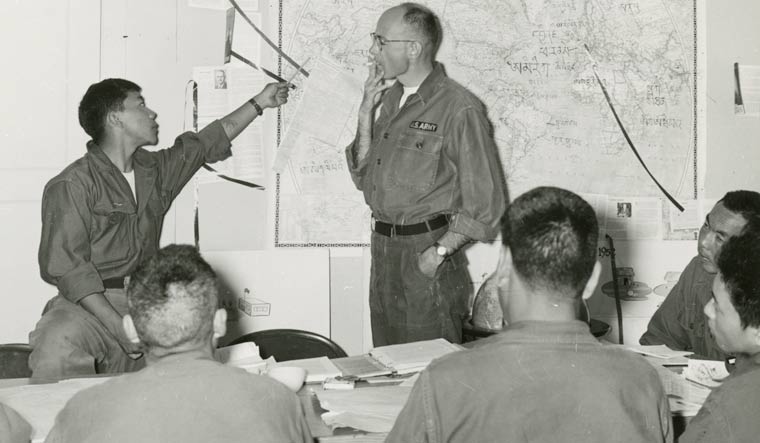 After the Communist Chinese invasion of 1949 and its subsequent takeover in 1959, Tibet has been a country under occupation. But little is still known of the guerrilla war that was fought from the mid-1950s to 1974, right in the middle of the Cold War when thousands of Tibetans took up arms against the invading forces of China. The CIA involvement in the two-decade long anti-Chinese covert operations to train and parachute Tibetan resistance fighters is given a more nuanced reading in 'Shadow Circus' as it brings to the fore the personal archives and artefacts of Lhamo Tsering, a member of Chushi Gangdruk, the Khampa Tibetan guerrilla group and a key intermediary between the CIA and members of the resistance. Serving as chief of operations, Tsering oversaw the activities of the resistance and at the same time, maintained an incredibly detailed archive of photographs, documents, letters and maps.

Filmmakers Ritu Sarin and Tenzing Sonam, who is Tsering's son, have researched this story for years and also made a documentary in 1998 for the BBC, called Shadow Circus-The CIA in Tibet. In the exhibition 'Shadow Circus', they re-evaluate the audiovisual material they have gathered over the years, including Tsering’s personal archives, and present a re-edited version of their 1998 documentary to create a more complete and complex mosaic of this still largely obscure story. "My father and the Dalai Lama come from the same part of Tibet, which is in Amdo province. But he came from the far borderlands in an area that was already overrun by Chinese settlers, even when my father was a child. And so when Dalai Lama's elder brother Gyalo Thondup came to Nanking in China to study, my father also happened to be there as a student. And being from the same part of Tibet, they immediately gravitated towards each other. In that part of Tibet, they speak their own dialect which is not Tibetan, it's actually a kind of a Chinese dialect. My father then became his closest aide, his secretary, and accompanied him ever since. So when the CIA started this whole involvement of resistance, Gyalo Thondup appointed him to take charge of the operations and be the liaison between the CIA and the resistance," said Sonam during a walkthrough at the exhibition, recounting how his father got involved.

"This is something I always find amazing because my father came from this remote, distant part of Tibet where they already lost their language, were barely holding on to their cultural identity. And then found themselves for the rest of his life actually fighting for Tibetan independence," said Sonam who was born in 1959 in a hospital in Darjeeling. Growing up, he would often see his father go away for secret missions for long stretches of time. 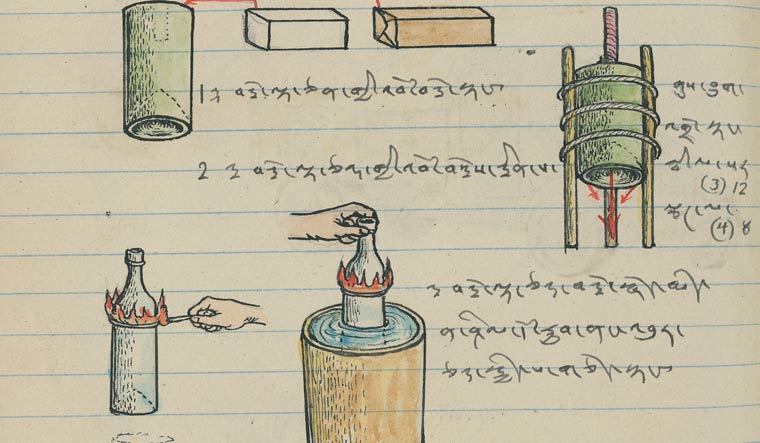 A page from guerilla handbook on explosives

The exhibition included snippets from long video interviews conducted with former CIA trainers who were tracked down by the filmmakers from several sources, including organisations like the Association of Former Intelligence Officers, found listed in the yellow pages in Washington DC. One of their video interviews played on loop.

There is the image of a shriveled cyanide pill which survived years of incarceration in Chinese prisons and later in exile in India with a fighter who preserved it. "We know that the fighters who were dropped into Tibet were all given a cyanide pill. And the idea was that these people wouldn't want to be captured live and tortured by the Chinese. They could pop it to defend their lives," said Sonam who vividly described how in the initial years his father received instructions in Kolkata's Park Street, full cloak-and-dagger style, as he always waited with a newspaper near Park restaurant for the taxi to arrive at 9 am sharp.

The audience were treated to incredibly detailed contour maps of Tibet, printed on silk alongside images of an abandoned intelligence-gathering radio device retrieved some four years ago from Nepal. There were letters Sonam's father would receive asking for details as mundane as account-keeping for day-to-day operations, apart from the actual recorded message of the Dalai Lama sent to the fighters in Mustang in Nepal to surrender their arms.

In 1970, the CIA abruptly announced that they were going to pull out of the operation. It was at the time when secret talks were underway in China, with the then US president Richard Nixon's national Security Advisor Henry Kissinger carrying out a new policy toward Beijing. And STCIRCUS was just not a convenient thing for them to be supporting. As Tsering said in an interview shortly before his death, “In my opinion, I don’t see our armed struggle as something that was helpful only at a certain point in our history, something that is finished. I believe we should look at it as one chapter in our continuing struggle for freedom, one that still has some meaning.” Tsering died in 1999 in a New Delhi hospital. 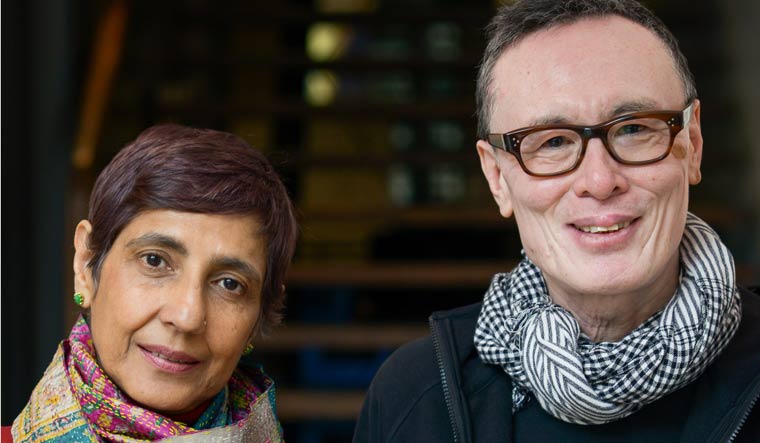