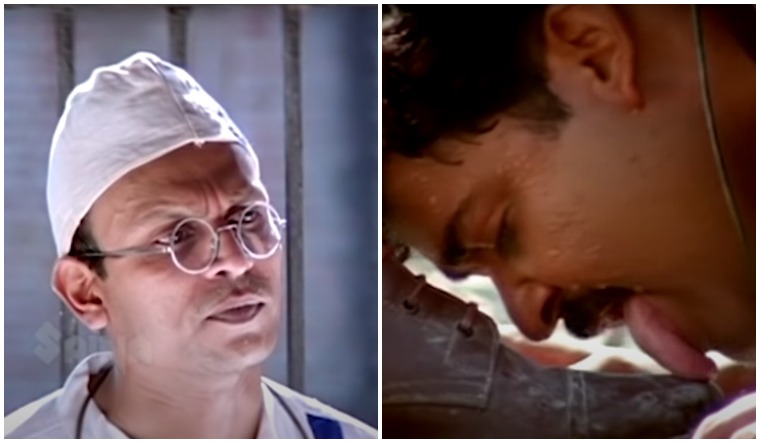 Annu Kapoor as Vinayak Damodar Savarkar in 'Kaalapani' (left); Mohanlal in an iconic scene from the film

The film Kaalapani turned 25 this year. This period drama was arguably the most ambitious film in veteran director Priyadarshan’s career. Produced on a budget of Rs 6 crore and with an ensemble cast comprising Mohanlal, Tabu, Amrish Puri, Prabhu, Nedumudi Venu and Sreenivasan, among others, this film portrayed the lives of political prisoners in the Cellular Jail of Andaman and Nicobar during the British Raj. Priyadarshan co-wrote the script with T. Damodaran. The film won four national awards and seven Kerala state awards (including the second-best film of the year).

Set in 1915, the film follows the life of a doctor who is wrongly convicted in a train bombing case. Though Dr Govardhan is a fictional character, the film features some important historical figures in its narrative. For instance, Vinayak Damodar Savarkar, the ideologue of Hindu nationalism; David Berry, an insanely cruel jailer in Cellular Jail between 1909 and 1931; and Mirza Khan, a Pathan jail warden who had been a nightmare for the prisoners.

In one of his interviews*, Priyadarshan described the film as “70 per cent history and 30 per cent fiction”.

The film starts with the note that it is “based on historical events that took place in the Andaman Islands during the early part of the century. [And] some of the characters portrayed are real”. One lesser-known fact about Kaalapani is that Savarkar’s book My Transportation for Life was one of the primary sources for the script of the film. The influence is there for all to see.

The book, which was first published in 1927, shows a tendency to tag both prisoners and jail wardens with Hindu or Muslim prefixes. And so does Priyadarshan in Kaalapani.

“All political prisoners had Mussalmans for their wardens. And myself was especially given in their charge. Those who were detailed to keep watch and ward on my room took great pride in that mission. For, thereby, they could boast all over the settlement that they were in the special confidence of their superiors. They were appointed to their place because the Officers wanted through them all the information that they could get about the political prisoners in their charge-their possible machinations and their secret communications. And the Officers could use the wardens as convenient tools to perpetrate any kind of cruelty, to trump up any kind of charge against the prisoners in their charge,” Savarkar writes in the book.

He notes that the British authorities in the jail favoured “Muslim” wardens over “Hindu” wardens. “Not only did the Hindu wardens suffer in promotion and disfavour, but the Muslim wardens succeeded more and more in ousting them from their jobs and replacing them by their Pathan brethren,” writes Savarkar. “For the Baluchi, the Sindhi, and the Pathan prisoners had wardens belonging to their own religion while the Hindu prisoners were systematically denied that favour. So that the Hindus suffered doubly. First, from their fellow prisoners, the Muslims, and secondly, from their Muslim warden. Since our admission to that prison, the situation in this respect had considerably worsened. The Hindu prisoners and the Hindu wardens had a hell of their lives in that place...”

Kalapaani is a film that primarily focuses on the problems faced by Hindu prisoners in jail. For instance, there is a scene where a group of Muslim prisoners try to attack Govardhan because he had helped a Hindu prisoner who allegedly made fellow Muslim prisoners eat pig meat. Also, there is another incident where a Brahmin named Ram Lakhan is forced by the sadistic Mirza Khan to eat a dead lizard. Subsequently, Lakhan’s sacred thread is removed on Khan’s orders, and later, he is force-fed human excreta to break his fast.

It may be interpreted that Savarkar, in his book, tries to set a “good Muslim-bad Muslim” binary. “The Pathans, the Sindhis and the Baluchi Muslims, with a few exceptions, were, one and all, cruel and unscrupulous persons, and were full of fanatical hatred for the Hindus. Not so the Mussalmans from the Punjab, and less even than they, those of Bengal, Tamil province and Maharashtra. But the fanatical section always belittled and held up to laughter their co-religionists from other parts of India. It twitted them as ‘half kafirs’. And this constant jibe-compelled them, very often and perhaps inevitably, to follow in the footsteps of their wicked brethren.”

Convicted for rape, Moosa is a converted Muslim and spy of Mirza Khan. And, Khan uses him to ignite communal feelings among the prisoners. In order to understand the nuances behind the creation of this character, we need to go back to Savarkar.

My Days for Transportation has a lengthy chapter on Savarkar’s “Shudhi movement” that was intended to reconvert Hindus who had become Muslims. According to Savarkar, there were forced conversions in the Cellular Jail. He explains the process thus:

“As soon as the Chalan came in that prison or whenever, later on, a suitable opportunity was found for the purpose, the young and the simple-minded lads out of Hindu prisoners were taken in charge by the head of the Mussulman warders and jamadars, the notorious Mirza Khan, and at once put on hard labour. The Mussalman warder or petty officer, in their immediate charge, lost no time in browbeating and thrashing them on the one hand, and in offering them baits on the other in order to force them into Islam. He would give them, with that end in view, tobacco to chew and sweetmeats to eat. On such an occasion, he treated these gullible lads with extreme kindness. When these boys were beaten and worked to the point of crying, he would openly advise them to become Muslims and all their troubles would be over. Gradually these new victims were caught in his net, and at last the ceremony of conversion came to be completed, by making them, openly abandon their seats for the meal among the Hindu prisoners and go into the rank of Muslim prisoners. They were then served Mohomedan food so that there was no more chance left open for them to rejoin their Hindu friends. The Hindu and the Mohomedan kitchens were kept separate in this jail and the cooks were Hindus or Mohomedans according to the kitchen they looked after. Once the Hindu lads were discovered dining with the Mohomedans, they were sure to be banned by the Hindus. This was, therefore, an effective mode and final stroke of absorbing them into the Islamic faith. They were at once baptised with Muslim names. If anyone called them by their former names, Mirza Khan would growl at them, and his myrmidons would threaten them with severe punishment. 'He is now a Musulman' they would say, 'and you must call him by his new name, beware'. This was the ceremony through which these poor lads were made to pass to be the followers of the new faith. No circumcision, no recital of the Koran, no Nimaz, was necessary in their case. Tobacco was their circumcision, hard labour their Koran, and dining with Muslims was their Nimaz.”

In the film, Moosa represents this process of alleged conversion in the jail. He tries to persuade Govardhan to convert to Islam. In the presence of Khan, Moosa tells Govardhan the hard labour he would have to do if he decides to stay within the Hindu fold. Subsequently, Savarkar would call Govardhan and ask him not to cave into Khan’s coercion.

The film also raises certain contradictions about Savarkar. For instance, it shows that Ram Lakhan commits suicide, and Savarkar declares a mass hunger strike demanding an inquiry into his death. However, Savarkar’s own writings in My Days for Transportation suggest he was against hunger strikes. “I was always against the suicidal policy of hunger strike, as I regarded it as ruinous to the individual and ruinous to the cause.” But Savarkar had declared a three-day hunger strike to persuade a co-prisoner named Nani Gopal to stop his hunger strike. “When Nani [heard] the news that I had declared three days' hunger strike, he was stricken with grief,” Savarkar wrote in the book. “I was taken to his cell by [Jailer] Mr. Barrie. I saw him and he agreed to break his fast. I took him aside and whispered, ‘Do not die like a woman; die fighting like a hero. Kill your enemy and then take leave of this world’.”

Interestingly, Priyadarshan’s protagonist Govardhan—who says that he had been part of Gopal Krishna Gokhale’s Servants of India Society, a moderate group, before coming to Andamans—eventually becomes the hyper-masculine “hero”, similar to what Savarkar wanted Gopal to be. Govardhan kills Berry and Mirza Khan, and is subsequently hanged.

Even now, after a quarter-century of its release, the film ignites debates in the Malayalam film circles, because of the socio-political narratives it offers, and the portrayal of Savarkar.

*Priyadarshan’s interview mentioned in the story is currently available on the YouTube channel of WildFilmsIndia Ltd.