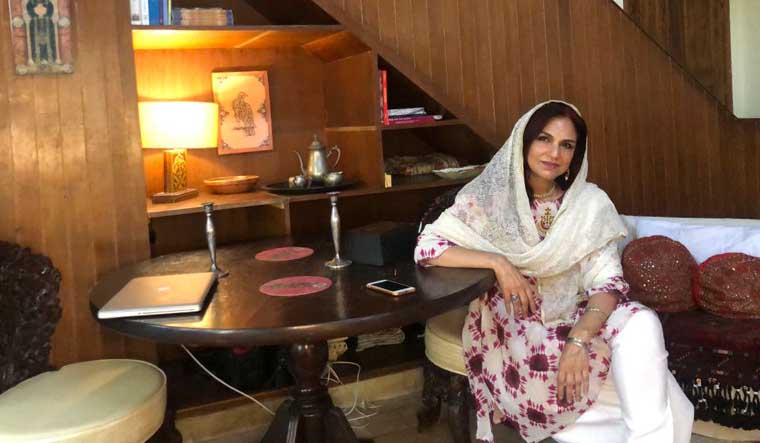 Sometime in 2016, a Pakistani visitor in Hyderabad was told to go into stealth mode. The caution thrown at her kept her away from a property which was on top of her wish list. Atiya Khan wanted to take a tour of ‘Darussalam’- the headquarters of All India Majlis-e-Ittehad-ul Muslimeen (AIMIM) political party located in the older part of Hyderabad.

“I wanted to go to Darussalam and see what the Owaisi brothers are doing. I wasn’t encouraged to undertake the trip as it would have led to a big blow-up,” she says.

Atiya Khan is the only one among her first cousins to set foot in Telangana’s capital. She can recollect only one from the previous generation of her family - her uncle - one among the 10 siblings, to have made it to Hyderabad, that too decades ago. After all, the family believed that they could not enter India for a good part of last century.

Yet, her physical presence raised eyebrows and sparked off intense discussions at social dos. “Please don’t announce who you are related to. It could incite people,” Atiya was told by a person holding an important position in the state government at that time.

Atiya is the granddaughter of Qasim Razvi, who remains one of the most controversial figures in the annals of Deccan history. A lawyer by profession, Razvi headed a private militia, Razakars, aligned to the seventh Nizam, Mir Osman Ali Khan. Between 1946 and 1948, Razvi controlled a force numbering anywhere between 50,000 to 2 lakh men. The Razakars reportedly committed atrocities on Congress supporters, Communists and other people who wanted an end to Nizam’s rule or favoured a merger with India. According to some historical narratives, he tried to prevail upon the Nizam to accede the state to Pakistan. In September 1948, as the Indian army made its way into the princely state of Hyderabad, Qazim wanted the Razakars to resist the takeover. A weak defence led to the Indian army rolling into Hyderabad effortlessly.

Seven decades later, the terms “Razakar” and “Razvi” are still stigmatic and evoke a strong negative emotion. There are houses in rural parts of Telangana which are labelled as those of Razakars, with an air of hostility. Razvi and his militia’s acts continue to reverberate every year on September 17, the day the Hyderabad state was annexed to India. While local political parties sparred on whether to celebrate the day as “liberation day” or “merger day” this year, for Razvi’s descendants in Pakistan, it is still an unsettled case.

Razvi was imprisoned by the Indian government for nine years and later, upon release in 1958, left for Pakistan. Among his 10 children are a professor, doctor, fashion designer, counsellor who grew up in Pakistan and later went on to settle in different countries.

Atiya shuttles between Karachi and Islamabad, and is the daughter of politician Fouzia Ejaz, one of the daughters of Razvi. A former model, filmmaker and now a Sufi promoter, Atiya’s visit to Hyderabad happened accidentally five years ago while she was in south India on the invitation of Sri Sri Ravishankar to research on Vedanta Yogis and its spiritual importance. Some of the people she met on the tour took care of her stay in Hyderabad after knowing about her connection with the city. Talking about her week-long trip, she said she became nostalgic while moving around in Hyderabad. “A part of me is very connected to the place. I went to what used to be my grandmother’s house. It is no longer there as it has become a huge housing society. The Golkonda fort and the museum were very grand and beautiful. And then I understood that it is also now the IT capital, and there is a really modern side of it as well, which was very nice to see.”

She says when she met people in Hyderabad and spoke about her ancestor, there was an immediate reaction which she was prepared for. In one instance, a person in Hyderabad who she met socially spoke at length about how his grandfather had fought against her grandfather. “They were sharing their stories with me. And then I was sharing my perspective with them,” she says.

Atiya was particular about visiting Darussalam as she feels it was synonymous with her grandfather. In 1946, Razvi became the president of Majlis-e-Ittehadul Muslimeen (MIM), a cultural and religious platform. Darussalam served as the centre of MIM’s activities till 1948 when Hyderabad state was annexed to India. In 1958, It was rebranded as AIMIM, a political outfit by Abdul Wahid Owaisi, grandfather of current Hyderabad MP Asaduddin Owaisi.

In 2019, Atiya made a nine-minute documentary in which she hailed her grandfather as a freedom fighter. She is proud to have his photograph on her writing table. For Atiya, Razvi was a religious, passionate and an idealistic man.

What does she have to say about the perception among the masses that Razvi was communal, extremist and involved in acts of crime?

“There is a lot of negative portrayal about my grandfather. He argued his case in a military tribunal constituted by the Indian government and they could not prove a single allegation against him. The proceedings of the court case are available online and anyone can see it,” says Atiya. She believes that some elements masquerading as Razakars indulged in certain criminal activities which defamed Razakars.

She feels that since the Sunderlal report was not made public for a long time, a one-sided narrative has been set. According to the declassified government-commissioned Sunderlal report, during and in the aftermath of ‘operation polo’, code name given to the police action of Hyderabad, 27,000 to 40,000 people died, mostly due to communal rioting. “An opportunity should be given to bring out the other side of the story so that there is a more balanced view of history,” she says.

“He (Seventh Nizam Mir Osman Ali Khan) put all the blame on my grandfather and pretended as if he was the innocent one.”

In Atiya’s household, Deccan identity is still alive in the form of photos, artefacts and food. “Sometimes, I get online messages from Hyderabad too,” she says.

In future, Atiya wants to revisit Hyderabad and open a dialogue about its past.