In the airstrikes on Gaza, children are the ‘epicentre’ 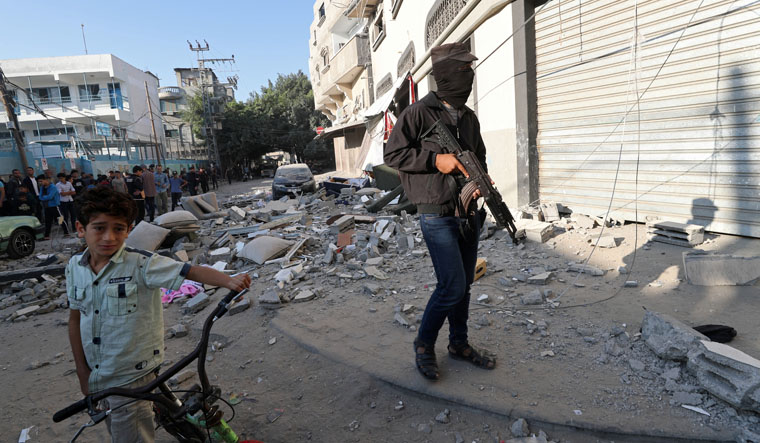 With warplanes overhead, the ground began to shake as if there is an earthquake. Moments later, Adam, a nine-year-old Palestinian boy in Gaza, heard the loud boom of yet another airstrike.

Some more homes would now go up in flames, leaving plumes of smoke and dust from their burning embers. One of these houses belonged to Adam’s grandmother. The young boy witnessed this horror day after day in May 2021. Once there were over 100 airstrikes in 40 minutes.

One day, Adam asked his mother, an aid worker: “Mom, are we going to die?” In Gaza’s bombed ‘war’ zones, children are bearing the brunt. There is no suffering and trauma left in hell. It is all in the young minds of Gaza’s innocent children. No words can capture their true suffering.

A 14-year young child in Gaza will have already lived through four armed conflicts- witnessing death and as a living testimony of suffering and injustice. Generals and politicians may start a ‘war’. It is innocent children who ‘fight’ it in its true sense.

Amidst the conflict, Adam and his friends cannot go to school. Going by the latest count, 40 schools and four hospitals were damaged or destroyed in Gaza. Junk debris and fragmented concrete pieces are all that is left where once stood schools and homes till a few days ago.

Nobody can sleep in this manmade hell. Adam’s mother, my colleague from War Child told me over the telephone from Gaza that when warplanes are not flying, they are worried about the next raid. The fear keeps them awake.

Heba’s son sometimes dozes off at around 3 am in the morning, always fully dressed. “When the airstrikes start, it happens with almost no warning and we need to run,” Heba told me.

“When you have to run and evacuate from homes to save your own lives from airstrikes, the last thing you have on your side is time”— and you do not want to waste even a minute looking for decent clothes to put on. “Every minute makes a difference of life and death”.

“I have kept a bag ready between my bed and the door. It has our identity cards, passports, some valuable possessions, and all the cash we have”.

This is not a drill or a simulation training.

Heba has spent ten years, most of her professional life, working as a psychosocial worker in Gaza. She was an undergraduate student of psychology in Jordan when the airstrikes hit Gaza in 2009. “I was very worried then and tried to stay in touch with my family members through phone,” she recalled.

Back in Gaza after her studies, she witnessed first-hand the airstrikes in 2012, 2014, and now. There are a few hundred children waiting for Heba’s help, their lifeline.

“I see a sense of hopelessness amongst children now”, Heba said. “I ask adolescents about their dreams for their future”. It is a standard question in psychological first aid to stimulate hope and confidence amongst children who survive wars and conflicts. “They say they are not sure about the future and so they don’t have any dreams or goals nor are making plans for the future”.

Some children talk mostly about today and the past and less about the future. Children talking about their lives only in past and present tense – it should send alarm bells ringing. A silent warning from children in war zones that the world ignores. Still, sometimes Heba’s son asks for her reassurance that everything will be all right. One day, the fighting will stop, and they will finally have their own place to be and live in peace, he would also share this bit to the collective hope of Palestinian children.

When I was coordinating relief work in Gaza in 2009, I met a group of children at the compound of what used to be their primary school. They were picking up their project reports and books from the rubble of concrete and twisted steel. It is their sense of hope that Adam is sharing.

As Palestinian poet Mahmoud Darwish wrote: “There is so much in this land worth living for”.

It is time to stop the war on children.

The author is Humanitarian Director, War Child. In collaboration with local partners, War Child has been delivering vital humanitarian services in Gaza and West Bank since 2006- protecting children from harm and support their psychosocial wellbeing.