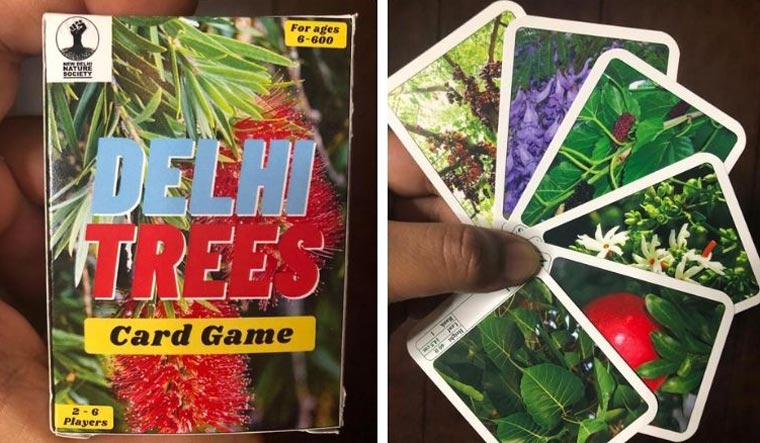 On the back cover of the card game 'Delhi Trees', there is a description of a fast-spreading disease called 'Tree Blindness'. This malady causes the afflicted to walk into trees, drive into trees, or completely look through a tree being cut outside their house. The best cure available from this ailment is to learn the names of the trees and spend more time around them.

In one of the many ways to correct the mass ignorance of trees, environment activist Verhaen Khanna has devised the card game which he started selling early this month. "Everyone in Delhi was searching for Oxygen cylinders a while ago. Thousands of trees are being cut every year for this project and that, from Delhi Metro to Ring Road to the Central Vista. The capital also has the highest air pollution," says Khanna, flagging multiple reasons why Delhi is always left gasping for breath.

"There was once a study done that the oxygen producing capacity of a healthy tree in a year is worth Rs 24 lakh. If you live without nature, you won't survive," says the 32-year-old who has spent a fair bit of time getting people to learn names of trees via his NGO Delhi Nature Society which would often organise tree-climbing activities, tree-hugging and tree census programmes where people learn to count trees in their colony.

When the pandemic induced a lockdown last year, Khanna started speeding up on his card game idea which was conceived in early 2020, so housebound children could play the game with elders and keep a sense of nature alive. Delhi Trees is a multiplayer card game which can be played between two to six people at best. It harks back to a time when we would play WWE collectible card games after school, outsmarting ranks and physical configurations of professional wrestlers. So in a 60 card-deck, players can compare and compete with height, leaf size and rank of trees from amaltas to moringa to powder puff and bottle brush.

"These are some of the most common trees in the city. Their flowers are highlighted, so people can remember names and identify them better when they step outside," says Khanna, who has sold 100 copies of the game so far and is actively promoting it on social media and WhatsApp groups of parents.

Khanna earned his commercial pilot license in the US before giving it all up to come back to Delhi to set up his NGO in 2014. He helps raise awareness about environmental degradation and ecological change through nature walks, camps for schools, colleges, RWAs, and working with MCDs, PWDs, DDAs, forest departments, or filing public interest litigations.

This year, Khanna has also launched an app, which works as an alert system to save trees. And he has already begun working on his next card game. "This will be meant for a single player. A 30-deck card game where the player will be assigned different tasks, like listening to bird songs, watching the sunset, etc. to help connect with nature."