From Kennedy to Biden: The tradition of the inaugural poet

Amanda Gorman, 22, will become the youngest poet to recite at an inauguration 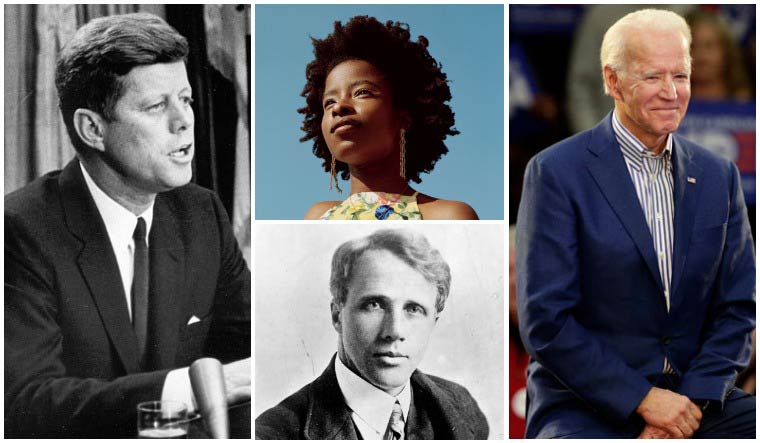 Three US Presidents, fond of literature and reading, have had poets read at their inaugural ceremonies. In 2021, Joe Biden, 46th president of the United States, will be the fourth, after John F. Kennedy (1961), Bill Clinton (1993, 1997) and Barack Obama (2009, 2013). And, Biden's inaugural committee has chosen a young 22-year-old Amanda Gorman to do the honours.

In fact Gorman is the youngest poet to recite at a presidential inauguration, following in the footsteps of such luminaries as Maya Angelou and Robert Frost.

The Los Angeles native, interested in issues of race, feminism and the African diaspora, was named the National Youth Poet Laureate in the US in 2017. First lady, Jill Biden, counts herself as a fan of the young poet's verses and is reported to have made a case for her at the inaugural committee. Interestingly, both Biden and Gorman have had to overcome speech impediment disorders of their own as children. Gorman particularly struggled with the letter 'R'.

On inauguration day, Gorman would be reciting her new work for the occasion which she could complete only after including parts of pro-Trump rioters storming the Capitol.

"In my poem, I'm not going to in any way gloss over what we've seen over the past few weeks and, dare I say, the past few years," said Gorman to The New York Times, ahead of the inauguration day on January 20, indicating how her task of composing an appropriate poem was rendered doubly difficult at a time when the American society is highly polarised, reeling under pandemic woes and an economic crisis.

Her poem, 'The Hill We Climb', reads thus:

We've seen a force that would shatter our nation rather than share it,

Would destroy our country if it meant delaying democracy.

And this effort very nearly succeeded.

But while democracy can be periodically delayed,

It can never be permanently defeated.

In this truth, in this faith we trust.

For while we have our eyes on the future,

History has its eyes on us.

How the arts and literature are intrinsic to the development of a civilisation is hardly ever acknowledged by heads of state. In his election campaign speeches, Biden has quoted lines from literary grandees like Seamus Heaney, W. B. Yeats and Langston Hughes. The practice of reciting original poems at US presidential swearing-ins is rather new and started with Kennedy who invited Frost in 1961 to read 'The Gift Outright'.

A 2017 piece in The Atlantic notes how poetry engendered some of the most unforgettable moments in presidential inauguration history. "Robert Frost struggling to see what he'd written down and then improvising at John F Kennedy's swearing-in; Maya Angelou speaking of dinosaurs, God and unity at Bill Clinton's; Richard Blanco saying 'hello, shalom, buon giorno, howdy, namaste, or buenos dias' to Barack Obama's second inaugural crowd."

No Republican president has ever had a poet read for their inauguration. Former US president Donald Trump is not known to have favoured any poet. The closest he's come to a poem are the lyrics of a song he recited during his 2016 campaign trail. Called "The Snake", it is unsurprisingly a cautionary tale on the dangers of immigration in Trump's reading of it.