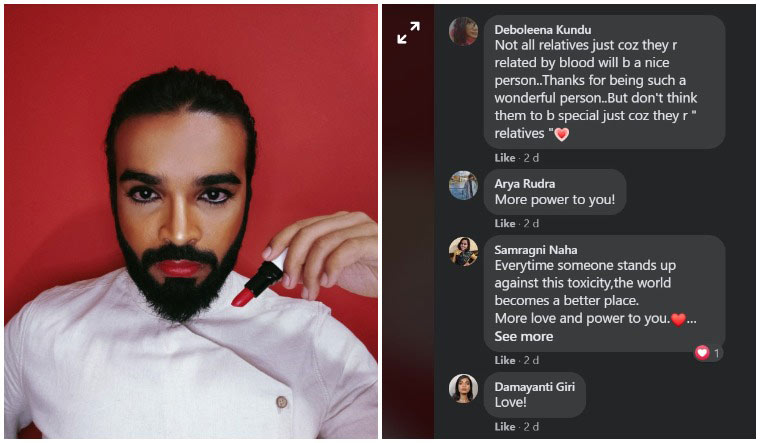 “It takes a great deal of bravery to stand up to our enemies, but just as much to stand up to our friends,” said the great Albus Dumbledore about Neville Longbottom in Harry Potter and the Sorcerer's Stone. Which is probably why when Pushpak Sen stood up to his relatives for his mother, the netizens couldn't but laud his courage.

The Kolkata-based man took to Facebook to narrate his mother's ordeal. The 54-year-old woman was slut-shamed for wearing red lipstick at a family gathering. What was worse, Sen said, was that nobody, young or old, objected to the 'bullying'.

“My mother, a woman of 54 years, got slutshamed, by some of our nearest relatives, for wearing a red lipstick at a family get-together. So yesterday, I sent all of them this picture with a 'Good morning. Get well soon.' message,” Sen wrote on his Facebook page.

“What baffled me the most is that some of these relatives have children, who are super 'woke' on social media and were present when this 'gossip' was happening but didn't say a word.

“Here I am, a man with a full face of beard and a red lipstick.

“Here I am, standing up for all the mothers, sisters, daughters, non males and all the womxn (sic) who have had to suppress their desires because of the toxicity of an insecure society.

“Here I am, standing up for all of them and asking my fellow brothers to stand up for the womxn (sic) you know, in your own way, when you see your loved ones getting bullied.

Sen's action was hailed by several netizens on Facebook. At the time of writing, Sen's post had got over 14,000 likes and reactions, and over 4,000 shares.