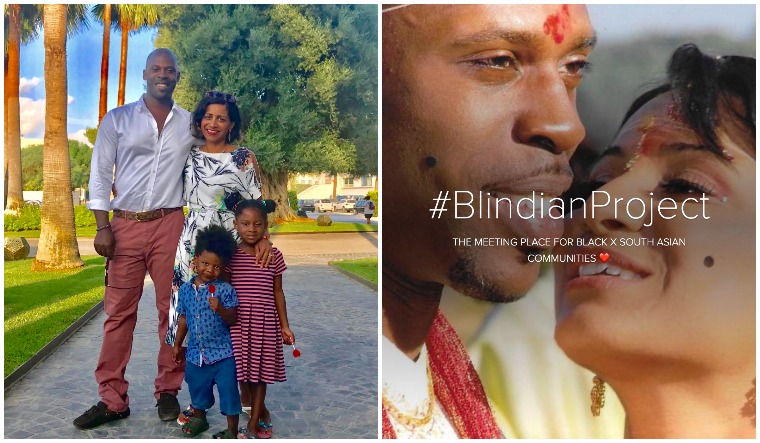 It was in 2017 that London-based Jonah Batambuze, a Ugandan-American IT consultant, read about the racial attacks on Nigerian students in Noida. Married to an Indian girl from a Telugu family in Andhra Pradesh, who he met while studying in Dublin, the news article came to him just a day before leaving for India to meet his wife's family. The mob violence against Africans living in India led him to delve deeper into the culture of anti-blackness in the world's largest democracy.

After returning to London, he reached out to Black and South Asian couples to share their stories of prejudice and discrimination. After 10 couples agreed to share their journey to companionship, #BlindianProject was born across Twitter, Facebook, Tumblr, and Instagram. Since then Jonah has worked on several other crowdsourced projects to remove adverse stereotypes around Black fatherhood and Black masculinity. In 2020, as Black Lives Matter movement gathers renewed urgency at a time of heightened police racism, Jonah has returned to his most impactful campaign yet: #BlindianProject. In an interview with THE WEEK, he talks about racist jibes in secular societies, raising Blindian children and what Kamala Harris could do for racial minorities in America.

You have been married to Swetha for more than 15 years now. What were some of the hiccups that came your way back then (when both of you decided to marry) which "blindian" couples might not face today?

Swetha and I were fortunate that our families were fairly accepting of our relationship. This is not to say that we didn't experience challenges, but neither one of us ever felt that we would get disowned for being together.

If you look back to the 1991 cult film Mississippi Masala, many of the negative stereotypes and stigmas surrounding Blindian relationships that existed then are still present now.

Do you feel Blindian couples who are both based outside their native countries have it easier when it comes to societal acceptance?

What kind of subtle, racist jibes have you had to encounter as a Blindian couple in so-called progressive, secular societies?

My wife Swetha and I have two beautiful mixed-race children aged six and four. Occasionally, we still receive stares from members of both of our communities when out in public. I can also remember a recent incident from a wedding when an uncle thought he was being funny when he commented on my skin complexion.

Both of you are similar in cultural richness and share a history of "otherness" in predominantly white milieus. Even so, as a Blindian couple and between yourselves, how defensive do you get about your respective racial and cultural identities? Do these issues on cultural competitiveness arise because of racist attitudes in your immediate environment?

From early in our relationship, Swetha and I had many conversations regarding race, cultural identity, and how we wanted to raise our family. These discussions were essential to ensure we knew what was important to us both collectively and individually. We believe in the beauty of diversity and don't feel any competitiveness between our cultures within our relationship.

What are some of the new complexities around race and colour introduced in your lives with raising Blindian children?

Conversations that may have been seen as more acceptable regarding skin complexion when we both were growing up doesn't apply to our mixed Black x South Asian children.

For example, the use of Fair & Lovely as a skin lightening product would never be suggested to either of our children. We want our children to embrace their melanated skin; so, offering those types of products is counterintuitive. While our children represent both of our cultures, we know our children will be looked at by society with a different lens.

You are in constant touch with so many Blindian couples through your social media project. What are some of the trends that you are happy about and concerns around 2020 Blindian coupledom that worry you?

In 2020, Blindian couples have seen a much greater representation in the media and mainstream society. People are being forced to discuss a topic that has been swept under the carpet for too long. Another trend is a growing need to find/belong to a community with people who can relate to the Blindian experience.

How have Blindian couples benefited from the renewed buzz around Black Lives Matter?

The horrific George Floyd’s incident that occurred earlier this year has inspired the South Asian community to reflect on how they perpetuate AntiBlackness and how they can become better allies. This moment has renewed conversations around Black x South Asian love, and forced people to confront it. My concern regarding Blindian relationships is that progress has been extremely slow, and couples are still fighting the same stigmas from 30+ years ago.

What do you like about each other the most?

The thing I love most about Swetha is that her South Asian culture is important to her, and she is an extremely loyal companion that emphasises family. Swetha has an adventurous, outgoing personality and often gets me out of my comfort zone. Which means I can unexpectedly find myself white water-rafting on the Nile River, or zip-lining on England's longest and fastest zip wire. I often find myself participating in activities that I would have never tried, which keeps life exciting.

How much do you feel Kamala Harris epitomises the Blindian ethos? How is she likely to create a safer space for racial minorities in America if she wins?

The thing I like about Kamala Harris is that she appears to be a fighter, not scared to stand up against others. When you think about Blindian couples, we are often regarded as fighters—because we are forced to fight for our love.

Many people are sceptical about Kamala Harris's time as a DA and Attorney General in which several of her actions disproportionately affected minorities. So, the jury is still out. Regardless of Harris's past, I would much rather see a Biden-Harris ticket in-office than the current administration.