Is India poised for a cycling revolution?

Amid fear of public transport and a lack of outings, cycling has gained in allure 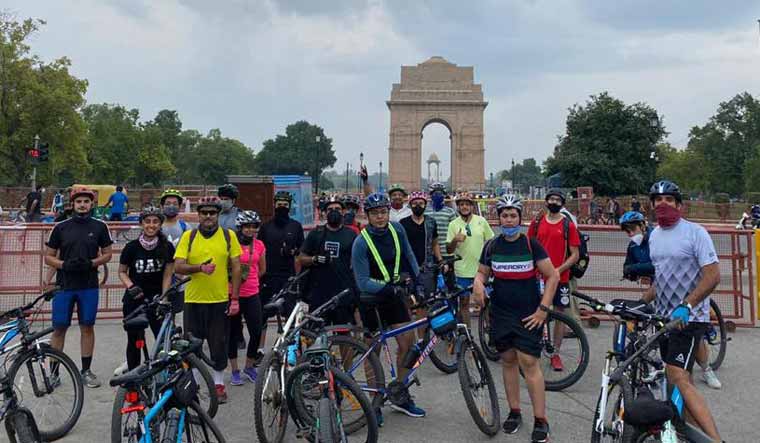 Gurpreet Singh Kharbanda from Delhi was always into cycling but mostly as a personal passion. The pandemic-induced lockdown made him start a cycling group at the end of June with two other friends. A resident of Sainik Farms in south Delhi, Kharbanda reached out to neighbours and in less than a month formed the 170-member strong Sainik Farms Cycling Club. This number—modest though it may sound—would not have been possible to assemble in this affluent, deserted neighbourhood in pre-COVID times.

"We couldn't form the group earlier because people have evening plans, their own work and schedules. With the lockdown, there's hardly been any outing. So it was easier to get people together. Now we have a formal group and we travel together like a family. We look out for each other," says Kharbanda who's covered distances of 25km to Mangar village on the Delhi-Haryana border with the Club riders.

Kharbanda says many of the members in the recreational cycling group are beginners and first-time riders, from preteens to senior citizens. One 57-year-old gentleman started cycling with the group.

Singh is certain the momentum for cycling will sustain itself beyond the pandemic.

"They now know the benefits of cycling," says Kharbanda, an auto-parts businessman, pointing out how the addiction, once acquired, is difficult to shake off.

Even as parts of the country unlock, allowing for greater movement after months of homebound lockdown, there's something to be said about the emancipatory benefits of bicycling. Especially in times of emotional distress. When the seven-year-old son of Leo Tolstoy died, the great Russian novelist first learnt to bike just one month after the death of his child. Tolstoy was 67 then.

Perhaps at this point, more than one's mood, emptier roads, the need for fitness routines and fear of public transportation is responsible for a surge in recreational cycling. But, no one is complaining as the wheels are set in motion. Vendors and shop-owners are reporting a manifold rise in cycle sales and rentals across cities.

All India Cycle Manufacturers’ Association (AICMA) is said to have registered a 25 per cent jump in countrywide sales in June for an industry worth Rs 7,000 crore manufacturing 20 million cycles every year. The surge in May sales was attributed to migrants returning home. Delhi, Uttar Pradesh, Punjab, Haryana and Rajasthan have recorded the highest demand, according to a report in The Times of India last week.

Besides, new and existing cycling clubs have added the highest number of first-time members in a couple of months. But hearteningly there is a simultaneous rise in interest in professional cycling from rural areas and small towns at a time when competitive cycling has taken a backseat; all major championships have been cancelled and postponed.

The Cycling Federation of India held its first e-pathshala on 21st July in collaboration with Sports Authority of India—like an online coaching and education programme for cyclists. The ongoing first month of teaching is focusing on beginners and grassroots-level applicants who have just started cycling or are trying to get into professional cycling. This will be followed by teaching intermediate and advanced cyclists in the next few months. This is the first time that the basics of professional cycling are being taught online, often reaching out to schools in remote areas through physical education teachers.

"The first day of teaching, we were expecting participants in the range of 1,000. We got 19,000 instead. We are now into our third week of teaching cyclists from the grassroots and every day we get some three to five thousand people joining in. Today we held a Q&A session and there were so many inquiries. Never expected this kind of a response," says Maninder Pal Singh, secretary-general of Cycling Federation of India.

But how does one teach cycling online?

"Professional cycling is one of the most technical things you will ever come across unlike football or hockey where it is all about individual talent. How to sit on a bike, what should be the size of your frame, tyres one should use, allowed positions by the international body, warm-up sessions, diet, recovery patterns, how not to overstress muscles, all of these can be learnt online," Singh says.