The art of canvassing the many moods of 'Malhar'

An art exhibition explores the legendary raga of rain 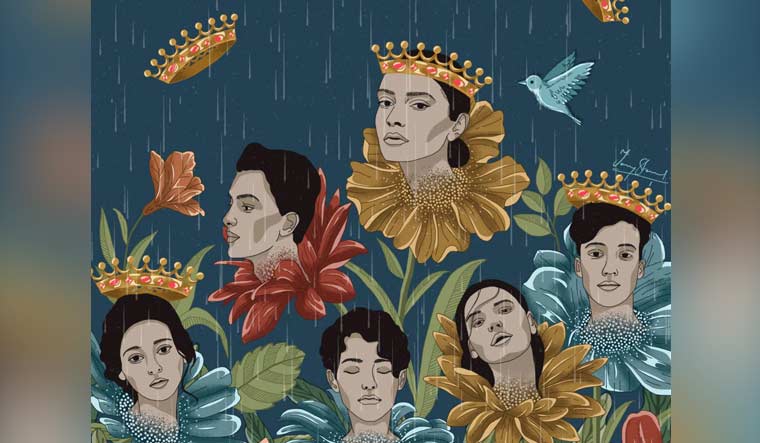 The painting 'Garden of Bloom' by Tanaya Sharma, exhibited as part of 'Malhar: A lyrical exposition' | Anant Art

Legend has it that Tansen—considered the father of Indian classical music—could summon the rains, turn daylight into dusk and tame the animals with his renditions of ragas.

'Mian' Tansen was one of the navratnas (nine gems) in Akbar's court which patronized the leading intellectuals and artists of the day. When envious courtiers conspired to make Tansen sing the Raag Deepak, the raga of light, the master-musician knew he could get singed by the power of his own music. But, he could ill-afford to refuse the emperor. On the appointed day when he sang, the extinguished lamps lit up and the leaping flames surrounded his engrossed self. It was his wife Husseini, schooled in the art of Raag Malhar, who came to his rescue. She invoked the rains with raag Malhar and saved Tansen.

Since then, Malhar is the storied raga in Hindustani classical music which when sung can induce torrential rainfall.

It is this origin story which sets the tone for Delhi-based Anant Art gallery's online exhibition on monsoon artworks. "A journey into Malhar attempts to interlace the classical with contemporary visual forms...The curation seeks to bring to light the artists' interpretation of ‘Mann ka Malhar’, or the Malhar within, a state of being (of mind and emotions), with a range of internal or external scapes to experiment with," says Chhavi Jain, curator of the ongoing exhibition now live on Anantart.com.

The raga has over ten variants, the more prominent ones being Megh Malhar and Mian ki Malhar. The paintings mirror and manifest the mood, meaning and structure of terms like Raga, which in Sanskrit means ‘colour’. Ragas breathe ‘rasa’ (emotion) which respond to moods according to the season and time of the day or 'pahar'. Malhar is a night-time raga, and in paintings, manifests in deeper shades of blue and purple.

Tanaya Sharma's digital print on canvas, titled ‘The Song of Rain’, expresses the theme most directly with a music-maker poised with a sitar. The striking image could serve as a representative poster for the show with its blooming dahlia of a face, seated like a lotus in a pool against a night-blue backdrop of chirruping birds; the shimmering sitar resplendent in all its glory. The figurative watercolour of Digbijayee Khatua, 'The Story of Land', painted in a set of six, sets itself apart in evocative ochre yellow, reminiscent of high garden walls picturesquely damp with rains. A fine, intricate story unfolds on its poignant surface from one wall to the next; almost Biblical in its simplicity and surety.

The abstract watercolour by Indrapramit Roy in black, grey, white and blue is a dull, sweeping landscape of the morning after; sore and numb from the unrelenting rain of the night gone by. In Nur Mahammad's figurative mixed-media painting, colours intermingle to create a jharoka view against a blackness of night. In the fantastical images created within the sloping eaves, there is a lone figure of a boy blowing bubbles into a series of ashen grey vignettes with heaps of shoes, broken brick walls, shelter tents and barbed wires.

"The gaze of the children in my paintings unmask the crises of the contemporary time. At the same time, their gestures symbolize a transformative possibility to bring about change,” says Delhi-based Mahammad. 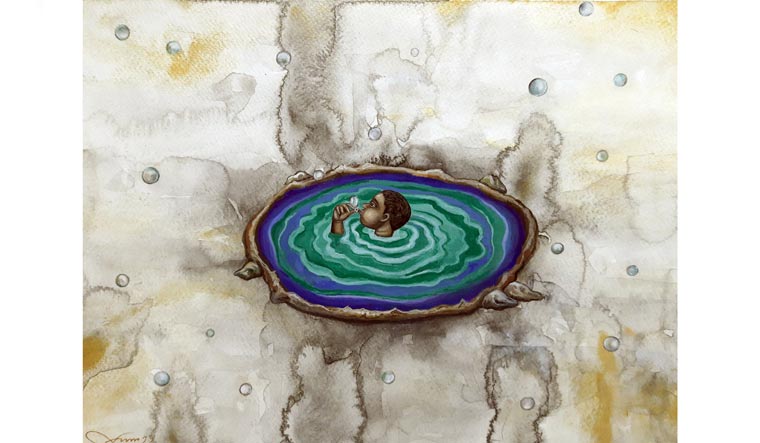 "At the end of socio-political chaos, there might be cloudbursts and peace will fall down as rain droplets," says Mahammad who incorporates the expression of 'Malhar' as a conflictual psychological terrain rife with agony and ecstasy.