Bhupen Khakhar's watercolour on Guru Jayanti to go under the hammer 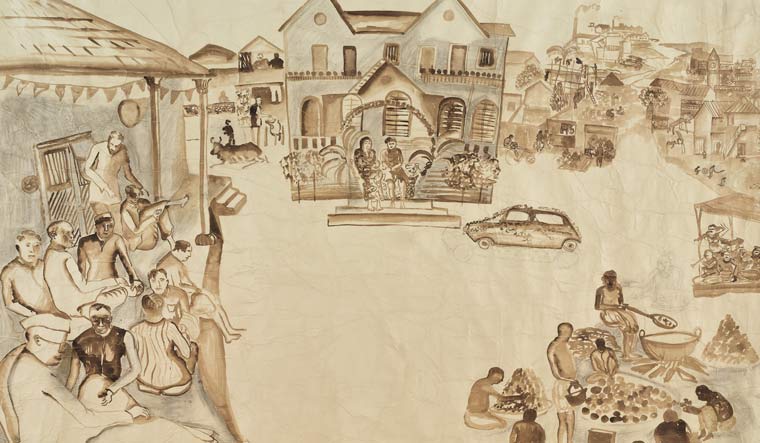 November 12 is Guru Jayanti or Guru Nanak Guruparab. The followers of the Sikh faith this year find the date all the more special as it coincides with the 550th birth anniversary of Guru Nanak, the founder of Sikhism and the first Sikh guru. Is there a painting which can chime with the festive fervour of the community members at this point?

Perhaps they should look no further than Bhupen Khakhar's 'Preparatory Study for the Celebration of Guru Jayanti', executed sometime in 1980. This 149.9 x 221cm watercolour and ink on paper—the largest Khakhar canvas ever seen—is set to go under the hammer at Sotheby's second 'Boundless India' auction in Mumbai on November 15.

Bombay-born Khakhar was one of India's leading contemporary artists to emerge from the famous Baroda Group which was formed in 1957. He was the first artist of Indian origin to be selected for Documenta IX in Kassel back in 1992. His works have been exhibited at the Tate Modern, London, Centre Pompidou, Paris, National Gallery of Modern Art, New Delhi, and The Museo Nacional Centre de Arte Reina Sofia, Madrid, among others.

Born in 1934 to middle-class Gujarati parents, Khakhar first trained as a chartered accountant in Bombay.

Largely self-taught as an artist, Khakhar is also believed to be the first Indian artist to reveal his homosexuality through his work. In fact in June this year, Sotheby’s broke his previous auction record of over $1.4 million (for 1972 ‘Trade’ painting, De-Luxe Tailors) with one of Khakhar’s well-known ‘coming out’ paintings, 'Two Men in Benares' (1982) which sold for over $3 million. Now with Khakhar's watercolour on Guru Jayanti celebrations—bidding price is pegged between Rs20,00,000 to 30,00,000—Sotheby's hopes to set newer record-breaking benchmarks for the artist whose works from his estate will be up for auction along with a never-before-seen painting by V.S. Gaitonde.

"We are most excited about the sale of works from the Khakhar estate, as he doesn't appear often in auctions considering he wasn't as prolific as others—that wasn't his main job," says Ishrat Kanga, deputy director, specialist, head of sale at Sotheby's. She is the principal auctioneer for 'Boundless India'. "'Guru Jayanti' is the largest watercolour we know of that Bhupen Khakhar did. This is actually a study of a large canvas that Khakhar made and it was called 'The Celebration of Guru Jayanti'. That oil canvas was actually lost; no one knows where it is. That canvas has been documented, written about and published. But it was lost. Has it been destroyed? It is just gone. So the watercolour is a composition he literally did based on that painting. That's why it is so special," says Kanga, who was also the auctioneer for 'Two Men in Benares' in London this year. 'Two Men in Benares' almost beat the record for the longest time a painting was ever auctioned at Sotheby's as the bidding continued for 30 minutes—such was the interest in the artist and his works.

And now there are high hopes for the watercolour version of Guru Jayanti, whose vast, original oil on canvas took eight months to complete. It was during Khakhar’s first trip to Italy in 1976 that the artist first laid eyes on Andrea Mantegna’s fifteenth-century frescoed chamber, the Camera degli Sposi, at the Ducal Palace in Mantua. The walls of the hall—also known as the Bridal Chamber—were adorned with a gaggle of figures in a celebratory mood at Ludovico III Gonzaga’s family and court. These vignettes directly influenced the composition of Guru Jayanti when British painter and printmaker Howard Hodgkin and Khakhar undertook a friendly challange in 1979 “to create an eight-footer”. In the process, Khakhar ended up producing 'The Celebration of Guru Jayanti'.

‘In this large drawing, many small ones are fused… The wedding-couple are placed far back, in front of the garlanded porch, which garlanded car awaiting. They seem curiously isolated; around them stretches a blank terrain before we reach the musicians on the right, and the cooks below them. The real emotional focus of the drawing is the left margin, with its array of lounging men, and in the foreground, the large unobstructed figure of a bespectacled man in white kurta pyjama, who could be the artist himself,’ writes artist, curator and friend of Khakhar, Timothy Hyman, in 1998 for Chemould Publications and Arts. The eponymous Guru seems to be seated to the right of the composition.

Khakhar himself wrote about Guru Jayanti.“I was thinking about Isaac Babel’s story, about the crucifixion of Christ; one person who is watching the event, and all the time complains about his toothache! Now here I am painting a guru, who carries out this important ceremony in this little town, but the people take hardly any notice of him… The ground in front of him is covered with flower petals… but the people are not aware of him.”