Property of a Gentleman: Revisiting history through stamps 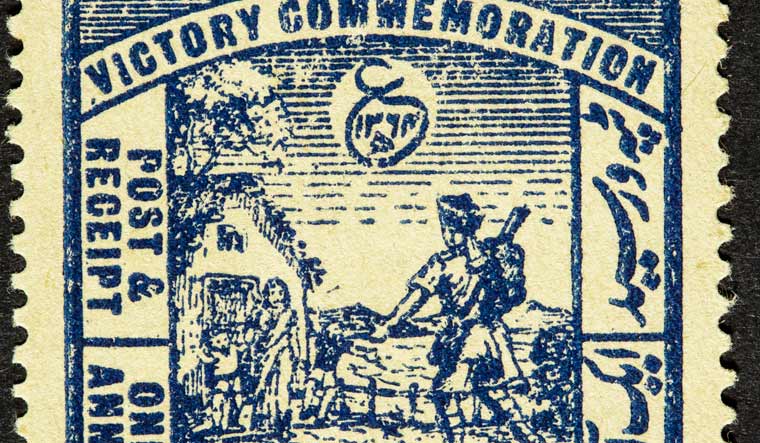 The cover of Time magazine on February 22, 1937 featured Mir Osman Ali Khan—the seventh and the last Nizam of Hyderabad—as the world's richest man back then. Osman Ali Khan ruled the princely state of Hyderabad from 1911 to 1948 and built some of its most iconic institutions, including Osmania University, Osmania General Hospital and the Hyderabad High Court. His reign also coincided with the printing of exceptional postage stamps as instruments of communication and revenue, especially under the watch of Nawab Iqbal Hussain Khan, the postmaster general in the government of said Nizam.

The exhibition 'Property of a Gentleman: Stamps from the Nizam of Hyderabad’s Dominions', at Delhi's Bikaner House, allows visitors to view a breathtaking range of some 120 odd stamps from the Ewari Collection which dates back to Nawab Iqbal Hussain Khan. Most of these were printed during the reign of Mir Osman Ali Khan. There are original postage stamps from Hyderabad, handwritten, calligraphed letters in several scripts, postcards, monogrammed envelopes, notes and seals, greeting and invitation cards, besides a wide repository of blind stamps, wet stamps and other stamping formats across mediums in dimly-lit, glass-fronted box frames. While all of them brilliantly evoke the illustrious philatelic tradition of its era, the one that stands out is the victory commemoration stamp sheet paired along with the "faithful ally".

Hyderabad was a feudatory state, which started printing its own stamps from 1839 till 1949 when it became part of the Indian Union. In nearly all stamps displayed in the series, one will be hard-pressed to find depictions of human figures as it did not sit well with Islamic doctrines. One will find illuminated calligraphic designs with scripts like Marathi, Telugu, English and Persian engraved in them. These play around with colour and inscriptions. There are depictions of modes of transportation used for delivering mail including dak runner, bullock cart, tonga, camel, train, steamer, lorry and mail plane. A monarch’s head, coat of arms or architectural features, modern institutions and famous monuments from the region are also part of the repertoire. But the victory commemoration stamp issued on December 6, 1945 is a departure from the norm.

Mir Osman Ali Khan was a huge supporter of the British government in both the World Wars. The Nizam gave monetary support, material aid and troops during the wars. He was a ‘Faithful Ally’ of the British government at the time of the Second World War. The Nizam provided grains, coal, military services and financial help in its war effort. In fact, Hyderabad was the first state to issue a stamp to commemorate the victory of the allied powers in World War II as reflected in the victory commemoration stamp sheet. The ‘Faithful Ally’ stamp was issued for Hyderabad’s war purposes fund. It has the words 'FAITHFUL ALLY HYDERABAD WAR PURPOSES FUND 1939 - TILL VICTORY' inscribed prominently in English. There is a quote included in the exhibition display by Winston Churchill speaking at the House of Lords during World War II, "His Exalted Highness has been with the allies throughout the fluctuations of this arduous struggle with gracious help in men, money and materials. His troops have done sterling service in Malaya, in the Middle East and the Squadrons which bear Hyderabad’s name have shared in the achievements of the RAF…”

It is in the victory commemoration stamps, one finds for the first time, human figures. It portrays a child and his mother standing on the threshold of their house to receive a returning soldier. It is the first stamp which shows Hyderabad's participation in the war and prominently features the name of the state in English across the stamp. This one 'anna' stamp in blue and white is the most unusual in the lot and is rightly placed in the centre of the exhibition in an enclosure.

Property of a Gentleman: Stamps from the Nizam of Hyderabad’s Dominions is on view till March 24.