Monica dela Fuente: The woman with many faces 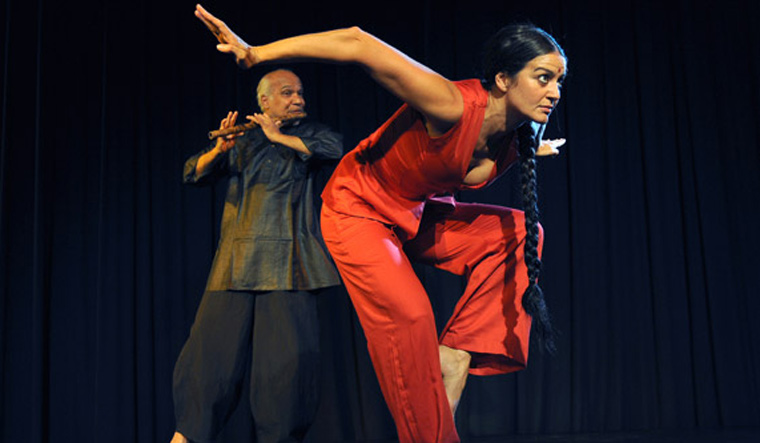 In 1993, when 19-year-old Spanish art student Monica de la Fuente expressed her desire to visit India and learn Bharatnatyam, her mother, like the mother of any adolescent daughter, was concerned. She, however, gave in when she saw her daughter's persistence to follow her passion. And a scholarship from the Spanish Embassy did help too.

“I never felt unsafe as a woman (in India), but was always looked upon as an outsider,” Monica said as she spoke to THE WEEK at the recently-concluded Kerala Literature Festival, Kozhikode.

Monica, who learnt Bharatnatyam from Kalakshetra, Chennai, for six years, under the tutelage of Meena Raman, and Kathakali at Kalamandalam, is all set to perform at Kolkata on Thursday. She will be performing a fusion of Flamenco and Bharatnatyam, called 'Seducere', at the Tantidhatri festival.

'Seducere' is about Mary Magdalene, who according to Monica, is a “very misunderstood character”. “I have always been interested in Mary Magdalene, a woman people know very little about. I feel she is an important character in relation to the beginning of Christianity. But for a reason that is not clear, she was called a prostitute by a pope in the the sixth century...which, I think, is not fair. Now, with archaeological discoveries, people know that she was rich and did not have to go into prostitution for a living. In the context of modern women too, Mary Magdalene is important. Many a time, I am called out for what I am wearing. I am told that what I wear is provocative. But I feel women need that kind of freedom to express herself. There is a lot that is said about how we speak and dress. Also, at the end of this play, I bring together two energies, taking inspiration from the concept of Ardhanarishvara from Indian mythology, that we are both male and female at the same time.”

Monica, who has been into folk dance since the age of eight, is a Catholic by birth and a mother to two baptised children. She, however, strongly feels that religion should evolve with time.

“I have been traveling for various folk festivals across Europe and that was a fun experience as a teen. And I enjoy folk dance as an art form as it tells stories of the people of a particular region. Folk dance has a lot of distinct costumes and rhythmic music,” Monica says, adding that she was very imaginative as a child. “I loved being with nature a lot; observing nature and listening to music were my hobbies.”

Coming back to her journey in India, Monica says, “When I first visited India as a teenage tourist, I saw Bharatnatyam being performed for the first time at Khajuraho by Alarmel Valli. I was so fascinated by her performance that I followed her all the way to Chennai and asked if she could teach [me]. She suggested that I join Kalakshetra because Kalakshetra would give me time and space to read and learn more about Indian dance and culture apart from learning the performing art in itself.”

Monica learnt Bharatnatyam for six years and then discovered Kathakali. She moved to Kalamandalam to train under Kalamandalam Krishnakumar for a year. She found that people were surprised that she was learning the art form. “This was in the late 90s when it was uncommon for women to learn Kathakali. But I am glad that it is changing now.” After a year, she moved to Trivandrum with her husband Guillermo Rodroguez Martin. “He was my boyfriend back then and later we got married. He was learning literature at Kerala University and I, Kathakali.”

In 2001, the duo moved back to Spain where they started Casa dela India. Guillermo oversaw various cultural exchanges between both the countries like cinema and art, while Monica brought in a fusion of Flamenco and Bharatnatyam, which she calls her own interpretation of the art. “I was not happy going the purist way. Spanish people have many outlets for dance otherwise. So, it was important for me to present what I had learnt in India in a unique way and find my voice,” Monica says.

While teaching the art form, she discovered tools that helped her understand her body better. “Even when I teach, I ask my students to interpret the dance in their own way. It may be conventional for Bharatnatyam dancers to recite slokas and dance, but for me, I would rather express myself through mudras and my eyes,” she says. The dance school is situated in Valladolid, a cultural town in Spain which has many dance schools and theatres.

Talking about her relationship with Guillermo, Monica says, “We have been together for the last 25 years. We have grown together as a couple. He has studied literature, while I do dance and theatre. Ideas always flow when we are together and so, we cannot separate art from life.”

One of her most important performances according to Monica has been 'Flower of Desire' which was inspired by Kalyana Saugandhigam. “It was a solo performance that I adopted in Bharatnatyam style where I played both Draupadi and Bhima. Then there is 'Narrow Path,' an adaptation of 12th century feminist Akka Mahadevi's vachanas. We used the English translations by A.K. Raman Vijayan, which was translated and adapted into Spanish by Guillermo. There is also is a version of Ramayana that I first presented at the International Theatre Festival of Kerala in association with Kerala Sangeetha Nataka Akademi.”

Monica has also collaborated with Ravi Prasad, a Carnatic singer who lives in France and has worked with Jazz and electric music. She has also worked with Carlos Suaro, a Spanish movie director for a stage show that involved 15 dancers each from India and Spain. Suaro has also made a movie trilogy on Flamenco, the dance form.

Monica's 'Seducero' will premiere at the Tanti Dhatri festival at Kolkata at 6pm.