Child marriages: The plight of child grooms nobody talks about 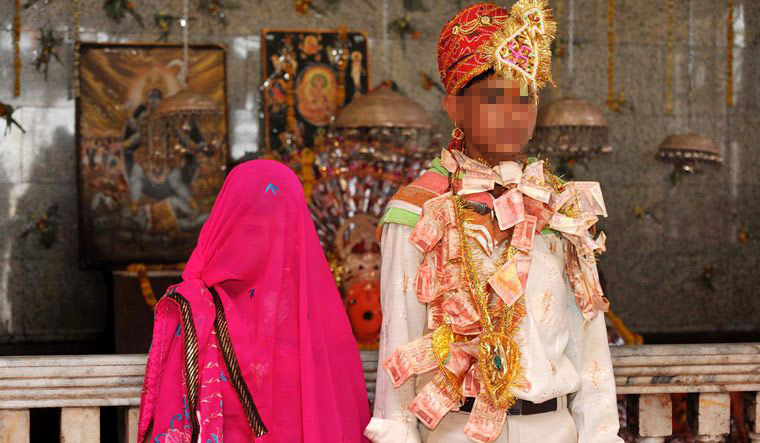 It was Manav’s friends who sprung into the scene to help the 16-year-old when he wanted to wriggle free from his family’s aspiration to get him married. In Banno’s case, it was her grandmother who put her foot down and said she will not send her granddaughter to her in-laws’ house. Both these children had one problem in common evidently—their respective families pushing them for an early marriage.

Manav had dropped out of school at 14 when he had failed the class X final exam. He took up a job far away from his home in Ajaysar village, Ajmer, Rajasthan. It took voices of other children from the village’s very own children’s group (a group of children who have come together to champion child rights issues) to get Manav reinstated into the world of learning. Once he was enrolled in an open school, Manav started to focus more on his studies. It was then that his father brought up the subject of him getting married as his elder brother was also tying the knot, and it was considered customary and economical to get children married off together.

However, with the help of his mother and fellow members from the children’s group, Manav was able to break off the engagement that his father had promised the bride’s party. “I had just realised the value of education, having gone back to school after giving up once. I was not ready to give up again,” he had said then. Manav continues to be in class 12, and is preparing for his upcoming exams.

For 16-year-old Banno, the case was entirely different; she was good at studies and had always had ambitions. And that became the very reason to tie her down, lest she “comes to have a mind of her own” according to her uncles and father. And when the family fixed the date of her marriage after a small engagement ceremony, the groom’s family did not want to wait it out and wanted to take her along with them.

Banno had hoped for the marriage to be stalled because she had only said yes to this arrangement after getting everyone to agree that she will be given over a year to finish her education. However, when plans started to change, her grandmother stepped in to support Banno, and said that she will not let her granddaughter leave the house now, even if that means the engagement is broken. The groom’s party finally left and things are still uncertain at her end, but Banno is unperturbed, and carries on with her studies. She is not afraid to speak her mind now and is looking forward to shaping her future through her own unique experiences.

These children belong to the small village of Ajaysar in Ajmer district of Rajasthan, and are among the 36 children who raised their voices against their families pushing them to get married last year. Most of them preferred to continue with their education and refused to opt out of school.

On-ground experiences bring to attention the first and the most important step here—delaying the age of marriage. By ensuring that the child stays in school, we are making a stronger case for her marriage being put off until she completes her education. While the RTE (Right To free and compulsory Education) is applied till a child is 14, it is observed that children between 14 and 18 are most vulnerable to child marriage. In the absence of RTE, to retain children after 14 in school becomes a challenge in many states. Therefore, an extension of RTE up to 18 years is highly recommended, for it would mean more children stay in school, significantly reducing the chances of them being pushed to marry early. By extending the marriage by a few years, the first pregnancy, in case of girls, can also be delayed which plays a crucial role in her health.

The problem of child marriage is multifaceted; it is essential to bring in various stakeholders who can be change-makers. The girl children have always been at the centre of discourses on child marriage, but the data clearly depicts the disadvantageous position that boy children are in as well. The implications of an early marriage have always been perceived to be much more severe on girl children, and rightfully so. However, the boy children take on a completely different path of struggle when they are married off early. Most of them carry the burden of taking care of an entire family before they turn 21—from earning money to meeting the day-to-day needs of every member of the family. The demands of fatherhood at a young age, coupled with soaring responsibilities and financial instability, make matters worse for those who are barely 20 years old.

It is worth emphasising here that after years of working with girl children, empowering them and making their voices heard, we have come to see the limitations in the designs of the programmes do not engage with boys—it is not just about including the boys, but making programmes which have gender-transformative approaches, keeping their gendered realities in perspective and prompting them to activate their agency; when children take up their own issues and assert their opinions in a system driven by adults, they become the game changers. Patriarchy has affected boys as well, and by building this perspective through our initiatives, we have found that more boys are able to comprehend this, and are joining their counterparts in defying gender stereotypes.

More often than not, a robust education system could well combat this persisting social evil. However, there are fewer efforts to reinvent the government education system. The system still doesn’t ensure 100 per cent recruitment of teachers and staff which leads to a severe deficit of personnel in schools—a reason often cited by young children themselves from Child Rights and You (CRY) intervention areas.

Mindsets, more than economic condition of people, play a pivotal role in occurrences of child marriage, and to combat this, one needs to spread the problem out; law is often based on punitive measures, so more stringent laws often lead to less reporting. While we do need legal ways to address the issue, to bring in a lasting change in the societal mindset, we need to go beyond that. This can be achieved through sensitising families and having consistent dialogue with the communities, especially with the male members, because, to address the problem in its entirety, both halves need to be judiciously weighed in.