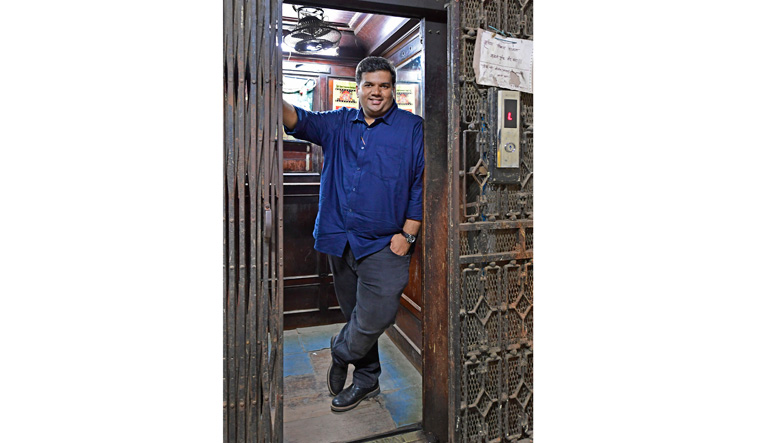 “It is a film that will certainly raise the happiness quotient,” says 27-year-old filmmaker Jonathan Augustin about his debut film—The Lift Boy. A delightful coming-of-age story, The Lift Boy, set to release on January 18, is a bilingual film inspired by Mumbai and life in general. This beautiful film explores unique relationships but most importantly, at its core, lies the story of a father and son.

How did the idea for the film The Lift Boy come to you?

In 2015, I had just come back from the UK with the intention of making a film, but the film I wanted to make was not happening. So, I ended up working in television. One day, I had the day off and went to a mall. I entered the lift and the lift was on one particular floor for quite a while because someone was coming in and we were waiting for that person to enter. When the lift went to the next floor, the door opened and he [a man] blasted the daylights out of the lift boy. The boy just looked at him and told him in a very monotonous manner: “Sir, main sirf button dabata hoon,” [Sir, I only press the buttons]. At that point nothing struck me. He had a lot of warmth in his eyes, but there was no epiphany at that point. As I was walking towards PVR to watch the movie, I thought this is a good thing. I can do a movie on this guy—he can be this lift boy and it can be the story of this boy who works in a posh building. I asked myself, why do we have a lift boy when everything is automatic. I thought the title The Lift Boy is good and registered it.

How did you choose your actors?

Moin Khan who essays Raju Tawde, the lift boy, is 25 now. But I found him when he was 23, on March 4, which is my lucky day because on March 4, The Lift Boy came, and exactly two years later, I found the lead actor. In my mind, I knew he is the 'lift boy'. He is a Bandra boy and he had acted in one film but he was leaving the industry because he had given up on acting and was joining a call centre. A friend of him told him to audition for a small independent film happening by a new company, a new director—a brown guy with a white name, no one’s heard of him and he is making this film called The Lift Boy. That was for a very tiny part which [eventually] got cut off from the film. He came to audition for the tiny part and when he came in, I just spoke to him generally. He did not know I was the director. He was willing to do anything for acting. His acting was very bad, his dialogues were flat, he was a log. But I loved his energy and I asked him to come audition for the lead. The casting team had put him in the “NG” (Not Good) folder. Luckily, I was in the office that day and that is why he got cast in the role. But all credit to him, he put in a lot of effort into this. That is how he got cast in the film.

Casting the female lead was a nightmare because in Bollywood, you do not have a 60-year-old female lead. This is one of the rare films where we have a 60-year-old female lead. We had all the typical big names but I told Ankita Bajaj [Casting Director] it was important to get a fresh face to bring this character to life and for it to sound authentic. I told her to go to all the posh malls in Mumbai where you will find an aunty with that panache. I wanted that My Fair Lady or Driving Miss Daisy kind of elegance. The first mall Ankita went to was PVR Infinity Mall, in Andheri West. As she was walked in, Nyla Masood ( who essayed Maureen D’Souza) was coming out. As Nyla came out after watching a film, she got a film! Ankita approached her, called her for an audition. The first thing I liked about her was her haircut. When I wrote the script, I always envisioned the actress with short hair. So Nyla’s look worked but her audition was very bad. I liked her look and we connected. I thought the vocabulary, diction and posture, all can be fixed. I liked the vibe and [so] I asked her at a coffee shop if she would be interested in playing this part. She said, “I have never acted in a film before”. I said, “I have never directed a film before”. So, we were both in the same boat. She agreed and we started the journey. They both gave us a good six months of rehearsals. We made them learn the dialogues, fixed their postures and made them watch good films. Because both of them were new and raw, there were no ego issues. Directing them was a pleasure.

Who has done the music for the film?

The music which adds to the experience, is very seamless and cohesive and has been done by a guy called Ryan Clark, “the Mozart of Nevada”. I got rejected by one Mozart (A big music director in India) so, I found my own Mozart.

I was looking for composers in India, and could not find one and then a total stranger who had never met me found my IMDB page, saw The Lift Boy page, tracked me down on Facebook, sent me a cold message and we spoke. He told me he wanted to pitch for this film as he really liked the synopsis and poster. So, we spent around six-eight months on the music and finally went to Vegas to get the music done.

What inspired that superb scene where Raju talks to his scooter?

My father had a second-hand scooter when I was very young and he would take me everywhere on it. It was a Bajaj Chetak, and it would stop everywhere. He would make me push the scooter and I would come home mumbling and muttering under my breath. So, he [Moin Khan] is Raju and that [his scooter] his Rani. He loves Rani a lot, he talks about giving dhokha to Karuna on Valentine’s Day and [talks about how from now on] only sadha (ordinary) petrol, no special fuel [for the scooter]. Even the scooter has been personified, even the scooter has been given a character. It shows the warmth of the guy.

What are your future plans?

I have got this Boy-series. The Lift Boy, then, I have got The Ward Boy which is a high-concept, horror genre film set in this haunted ward, in a hill station. I am looking at Dehradun, a place I am really keen on shooting. We are also looking at Nepal and Bhutan. We are looking at making this a Christmas horror story, so, it will be something different in the horror space. I am looking for a financier for it. Then I have got The Office Boy and then the series will come to an end; maybe we will make The Spot Boy,we don’t know. And then I really want to make this lovely biopic of a very famous personality.

Did the fact that you live in Chembur and R.K. Studios is right next door have any influence on you at all?