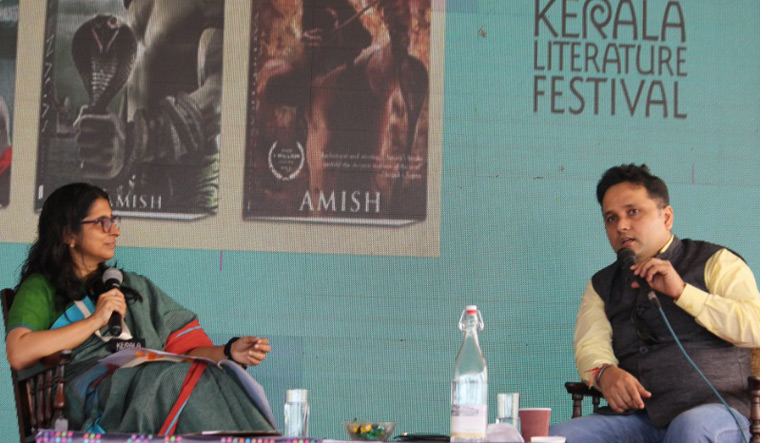 Filmmaker Shekhar Kapur called Amish Tripathi India’s first 'literary popstar'. The name stuck, and not for no reason. By his own admission, the author of the Shiva trilogy, Ram Chandra series and Immortal India, a non-fiction work, has four million copies of his books in print. His Shiva trilogy became one of the fastest selling series in Indian literary history. During his session at the Kerala Literature Festival at Kozhikode, organised by DC publishers and moderated by translator Prasanna K. Varma, the author spoke at length about numerous topics including the Sabarimala debacle, gender equality in ancient India and the origins of caste system.

Why the shift to non-fiction? “Most of my works start as non-fiction, and are later wrapped around fiction,” he said. “For instance, in the Shiva trilogy, I ask the question: What is evil? In the books about Ram, I try to find out about what an ideal society is supposed to be like. Immortal India is just the first step, bare, without the wrappings.”

Why the attraction to Shiva? “Shiva is an apt god since we live in contradictory times. For me, there is an added personal attraction that Shiva is a god for the rebels. In a way, Rama, the maryada purushottham, and Shiva are kind of polar opposites."

What attracted him to write about both? “Consider it like this. We are a very chaotic, rebellious society. Japan is a more compliant one. We need to have a little bit more of Rama—follow the rules more and cut down on the chaos. Japan needs to be more rebellious. All of us need a little bit of both,” he said.

In a country like India, he said, change cannot be enforced on a society from the top. “We need to speak, convince and debate. It is a much harder route. Take the case of India’s great son Adi Shankaracharya. How did he enforce change? Not by capturing power and enforcing it from the top. He spoke, convinced and debated, in the 1700s, a time when the structures were so rigid.”

So, what does he think of the enforced social change in Sabarimala, where a tradition that women of menstruating age could not enter the hill shrine was made legally unlawful. Gender equality is not something that is alien to us, he said. “India is one of the last surviving goddess-worshipping cultures. Even our most ancient works feature women prophets. Rigveda, the oldest of them all, has hymns written by rishikas or women priests. Sabarimala is a bit different. You look at the issue, not the practices but the philosophical sides of it. We are a grahastha culture that places a huge stress on relationships—the husband-wife, teacher-student, and the ruler-ruled. In every culture, there are sanyasa routes—in Islam, Christianity, or monkhood in Buddhism and Jainism. The 41-day vratha, I feel is a temporary induction into sanyasa. You can revert back to grihastha or continue the same.”

“Perhaps a mistake that liberals make is to quote western examples, rather than ones from our own soil. If we wanted to quote an example where women were allowed to rule in the ancient times, why can’t we quote the example of Bhopal begums? Why do we have to look to America for that? Our ancient culture is not about oppressing women. It is the exact opposite.”

One of the chapters in Immortal India is on caste. What does he think about the caste reservation debate raging on right now? How can caste be eradicated? Are reservations a way to do that? “I don’t know. There have been more movements to eradicate caste in the past 70 years than there have been in the past 500. Reservation did play a part in that. One of our biggest misfortunes is that we don’t read Ambedkar in our school syllabus. In his work Where are the Shudras, he argues, based on textual evidence that caste was not originally based on birth. Around 1,000 years ago, it became this rigid structure that we see now. There were verses in Bhagavad Gita which mentions varnas, and nowhere does it say it is based on birth,” he said.

“Take Valmiki Ramayana, the oldest version of the epic. There, an officiating priest in the royal court, is mentioned—Satyakam Jabali. He is the son of a shudra woman. Nobody cared about it at the time.”