Justice Katju: Whatever his motives, Periyar helped the British 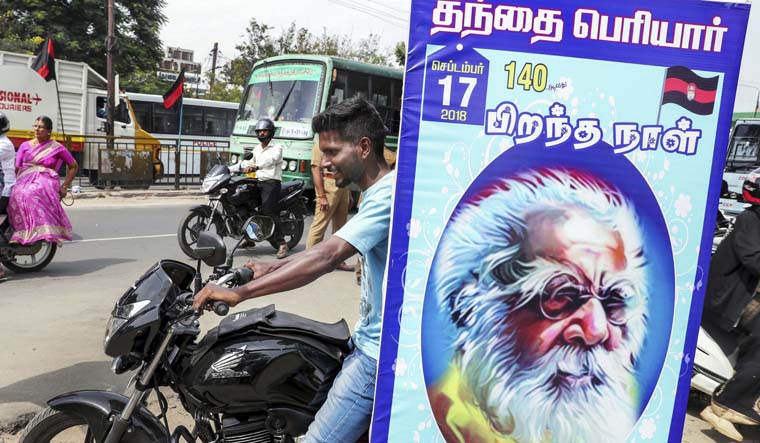 The 139th birth anniversary of E.V. Ramasamy (Periyar) was celebrated in many parts of Tamil Nadu, on September 17, with great fanfare. However, some acts of vandalism on his statues were reported in Chennai and Dharapuram in Tiruppur district. Periyar (1879-1973) is regarded as a great fighter against the caste system, superstitions and empty rituals. He was considered a proponent of rationalism, women emancipation and upliftment of the downtrodden. Both the Dravidian parties in Tamil Nadu—the DMK and the AIADMK—claim their ancestry through him, and no politician in Tamil Nadu can dare criticise him. He started the self-respect movement and created the Justice Party, which later became the DK (Dravida Kazhagam). DMK was an offshoot of the same. However, in my opinion, the time has come for a fresh, objective and unemotional assessment of Periyar, and I am here presenting my own view. I do not dispute that Periyar fought against injustices in the society. But, this has to be coupled with the following considerations:

1. As is well known, the British policy in India was of divide and rule. Their efforts were directed towards sparking enmity between Hindus and Muslims (see, in this connection, B.N. Pande's speech in the Rajya Sabha, ‘History in the service of Imperialism', and my article 'The truth about Pakistan'). They also strived for division along the lines of caste. Periyar constantly spouted venom against Brahmins and brahminism. "If you see a snake and a Brahmin, kill the Brahmin first": this was a statement famously attributed to him. Some have denied its authenticity, but there is no doubt that his hatred towards Brahmins was unparalleled, and it was not long before violence followed words. There were many incidents of attacks on Brahmins in Tamil Nadu—their tufts and sacred threads were cut off—leading to a partial exodus of 'Tambrahms' from the state. I submit that, by dividing society along caste lines, Periyar was helping the British, whatever his motives may have been. There can be no denial that dalits were (and still are) treated disgracefully in our society. But the remedy is not to instigate hatred against Brahmins or other upper castes, but for dalits to join hands with the enlightened sections of the upper castes and jointly wage a struggle to put an end to this infamy. As I explained in a blog post 'The Caste System in India' (see on my blog Satyam Bruyat), the caste system, whatever be its origin, had evolved into a feudal occupational division of labour in the society, and every vocation became a caste. There was a small section of the society involved in intellectual work. They were the Brahmins, and their language was Sanskrit. There was no system of universal education in the feudal system, and the educated class in India was almost exclusively the Brahmins (just as in Europe, the educated people were mostly the priests, using the Latin language).So, the Brahmins, being the educated class, had a head start over the rest. When the British came to India, the Brahmins learnt English, gaining disproportionate representation in the bureaucracy, the judiciary, academia and other professions. So, it was not because Brahmins were intellectually superior to non-Brahmins, or because Brahmins were, by nature, tyrants, that dalits and others remained oppressed, and had far less job opportunities. There were historical reasons for it.

2. Periyar claimed to be a rationalist. That is true as far as his polemics on superstitions and empty rituals go. But, in his attacks on Hindu gods like Rama, whose picture he burnt at a Marina beach procession in 1956, he betrays a lack of scientific temper. What Periyar did not understand was that religion cannot be destroyed unless the social foundation upon which it rests is destroyed (see my blog post 'Taslima Nasreen is brave but stupid').

3. Periyar wanted British rule in India to continue, and did not want India to become independent. He announced that August 15, 1947, would be observed as a day of mourning, since Dravidians would thenceforth be ruled by northerners and the Aryans who dominated the Congress party.

4. He wanted an independent Dravidistan, separate from north India, which he called Aryanstan. Had this happened, it would have been disastrous for the economy of Tamil Nadu. Presently, industries in Coimbatore, Karur and Erode sell their products in Punjab, Uttar Pradesh, Madhya Pradesh and Bihar. What would have happened to such industries and their employees if this market had been cut off?

I think the time has surely come for a fresh, unemotional and realistic assessment of Periyar.