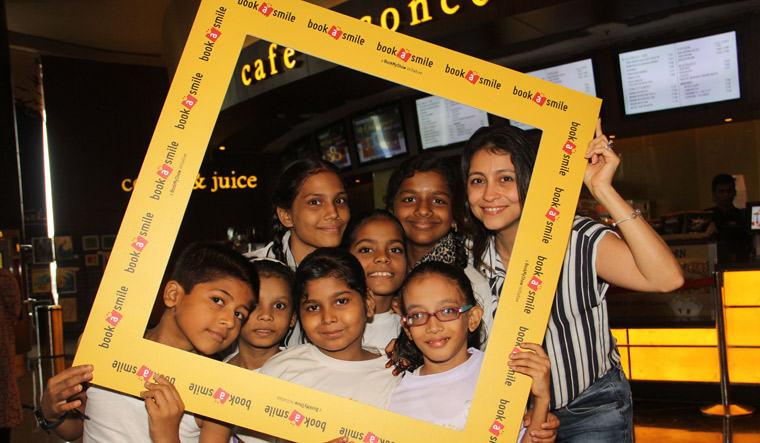 Farzana Cama Balpande with kids during an event

Who wouldn't want a bit of magic in their lives. Much before J.K. Rowling enthralled us with the magical world of Harry Potter, tales from The Arabian Nights, especially that of a poor street urchin Aladdin and the genie from a magic lamp, fascinated us with their surreal elements.

It is not always that 'magic' finds its way into the lives of real children who toil in the slums of Mumbai, and care homes. On Thursday, however, a happy change awaits some of these children, away from everyday struggles. Aladdin and the fabled city of Agrabah—the city of flying carpets, soaring heroes and famous love ballads—will come alive on stage, for over 950 of these children. At the National Centre for Performing Arts in Mumbai, about 50 talented artistes will deck up in vibrant costumes, and throw up a spectacle on stage—Aladdin, Disney's second Indian Broadway-style musical produced by BookMyShow. Aladdin, the musical, has been playing in Mumbai since April 20.

The special show for children is being organised by BookASmile—a charity initiative of the online ticketing platform. “What we do is to try to bring the space of entertainment to those who cannot afford it,” says Farzana Cama Balpande, who heads the initiative. “Watching an extravaganza like Aladdin unfold on stage, will be a first-time experience for them,” she says. As Aladdin travels to other cities, BookASmile plans to take the experience to more beneficiaries through a network of NGOs.

In the midst of efforts by various organisations to provide shelter, healthcare and education to underprivileged sections, BookASmile tries something unique—to spread smiles through films, art, theatre, culture, music and sports. For BookASmile, it goes beyond the primary needs of 'roti, kapada, makaan', says Farzana. As part of similar initiatives, they also screen popular films. The response is heart-warming, she says, as she recalls the awe on the face of a woman in her fifties who watched a film on the big screen in a theatre for the first time.

“Our forte is entertainment, and we thought we should use the same platform to give back to the society,” she says.

Farzana, 43, who has been heading the initiative since November 2014, says the journey has been gratifying. For someone who started her career as a pre-school teacher, lighting up children's lives comes easily to her. And she knows it best that a happy childhood needs more than just education and care—it needs exposure to culture which opens new avenues of learning for the children. Farzana and her team work with those aged between eight and 20 years, and have a long list of initiatives that they are proud of. BookASmile partners with NGOs to also promote sports—be it football, kabbadi, badminton, para-swimming or blind cricket.

It is a humbling experience, she says. “When you learn about the battles people fight each day, your everyday complaints become trivial.”

The power of one

The works of BookASmile also speak volumes of the power of Re 1. “People ask me what can you change with one rupee. A lot,” she says. Users of the online booking platform have been contributing Re 1 towards the initiative. Noticed a checkbox on the transaction page that asks if you want to contribute Re 1? That goes towards bringing smiles.

There are a lot of generous users who inquire if they could contribute more to the cause, she adds. “Just give us that one rupee. It can bring about a world of change. Such is the power of one.”