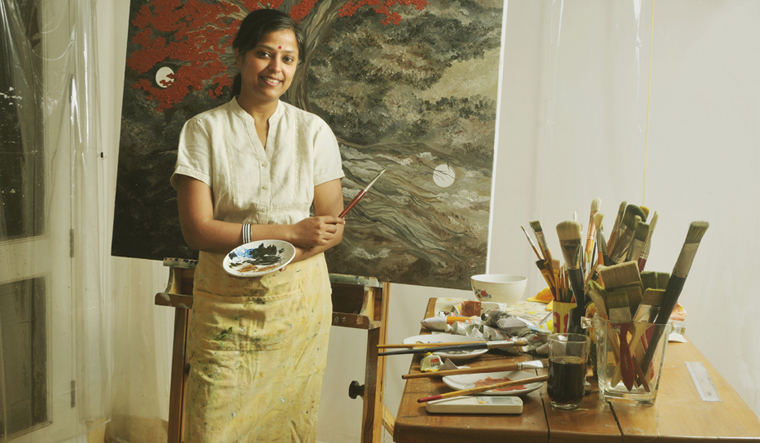 Attempting to revisit the questions of religion and god, which are part of the Indian philosophical thought, artist Kota Neelima has been inspired by the questions of existence and creation. In her upcoming show 'Metaphors of the Moon', the artist has raised the questions related to the existence of god. Through her current series of paintings, the artist, in her show that will take place from May 11 at Lalit Kala Akademi, is revisiting the questions in a contemporary context and has tried to picture them visually.

The theme of reconciliation struck the artist in 2014, when Neelima began the research of her book, Widows of Vidarbha, which highlights the lives of the windows of the farmers who committed suicide due to agrarian distress in Vidarbha. While researching, she stumbled upon the thought that faith plays an important role in helping people deal with stress. This gave her the idea to do an art show on reconciliation.

“I was trying to understand the ways an ordinary Indian reconciles, and how a person hopes. At that time, it occurred to me Indians are spiritual irrespective of the religion. It was the reconciliation of the widows which actually made me think about the idea, it's origins and how a mind reconciles,” she says.

“When I read Upanishads, I realised the reconciliation was similar to what Shankara says about the soul and it's purity,” she says.

With 25 works, Neelima has used the symbols of nature such as trees, moon and sky to highlight the trajectories of the mind as it travels from absence to presence in an eternal cycle. The reasons for zeroing down on these elements, she says, was their metaphorical explanations.

“Tree for me is the end as well as the beginning. Tree is known as tree of life and tree of mortality. Tree is known as a living thing that also dies. But it also regenerates and it reconciles to the loss of its own branches, roots and its own self. The metaphors for the moon, on the other hand, is distance and companionship. Mind regenerates itself to new thought and a day is the metaphor for life,” she says.

Neelima has been a lover of charcoal sketching and in her works. Her current artworks also showcases this technique. While highlighting about her works, she says, “I do charcoal sketching before applying the paint. This is because I feel that line on paper is far more dynamic. It has movement and is far more agile unlike the paint on canvas. The upcoming artworks have been done with oil on canvas and the style is impressionist-abstract,” she says.