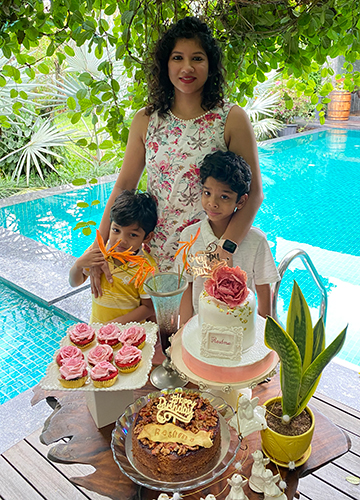 More than a mother: Reshma Adarsh Varghese with sons Ayaan and Aaryan.

Former US first lady Michelle Obama started kindergarten in the fall of 1969 with “twin advantages”—she could read basic words and had a popular older brother who had gone ahead of her. Such advantages, Obama writes in her memoir, Becoming, could have a ripple effect in a child’s development. As early as 1969 in a public school in America, she was learning a basic truth: “If you’d had a head start at home, you were rewarded for it at school, deemed ‘bright’ or ‘gifted’, which in turn only compounded your confidence,” she writes. “The advantages aggregated quickly.”

Instead of twin advantages, children growing up during the pandemic are facing twin disadvantages: lack of play and lack of learning in a physical classroom. Such disadvantages, too, can have a ripple effect, says Delhi-based clinical psychologist Prerna Sharma. She feels the pandemic generation is going to be different. “Covid-19 has deprived children of some of their development needs,” she says. “For young children, lack of contact with their peer groups in schools and parks could lead to poor emotional development, anxiety and isolation. Teenagers are finding it difficult to come out of their private zones and be with families, primarily due to their digital addiction.” Sharma says that many longitudinal studies are needed to assess the pandemic’s long-term impact on children; ultimately, only time will tell.

According to the UNICEF, children younger than five years impacted by the pandemic may display symptoms like thumb sucking, bedwetting, sleep disturbances, loss of appetite or fear of the dark. For children between five and 10 years old, these symptoms may mutate to irritability, aggression, clinginess, school avoidance and poor concentration. Adolescents might show hyperactivity, agitation, increased conflicts or delinquent behaviour.

Parents are worried. “I feel some stunting of development has taken place,” says Reshma Adarsh Varghese, mother of two boys, Ayaan, 9, and Aaryan, 5. “My sons’ tantrums are not age appropriate. There has been a character change brought about by the pandemic. The sad thing is that I cannot do anything about it.”

But she might not have much cause to worry. Children might be more resilient than we give them credit for. Also, we have a precedent. In the 1930s, sociologist Glen Elder started tracking 167 adolescents who were born in 1920-21 and grew up during the Great Depression. At least economically, the conditions then can be compared with what we are experiencing now—poverty, loss of job, starvation, bankruptcy and downward mobility. At that time, too, it was speculated that children of the Great Depression would be permanently scarred with anxiety, fear and depression. The reality turned out to be different. The trauma of their childhood translated to greater success in adulthood. Children grew up to be more self-confident, content and less defensive.

As Sharma says, the most we can do for our children currently is to ensure an environment of security and trust. “How safe have we made the world around them?” she asks. “How can we ensure some kind of peer support? How can we engage with our children more effectively as parents? If we can ensure all this, we can help our children emerge from this phase in a healthier and emotionally balanced manner.”

“I feel guilty for not realising how insecure my child got” 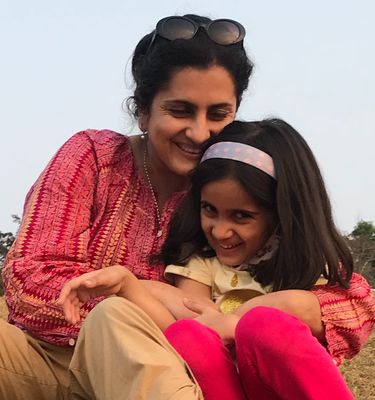 The pandemic was especially hard on my daughter, Anoushka, 7. All children went through the dilemma of not being able to process what was happening around them. The difference for the children of frontline workers was that they did not have the security of having their parents with them at home. Anoushka is a single child, and both my parents and my husband are doctors. So she had neither her grandparents nor her parents at home as security; that really took a toll on her. I did not realise it initially. Only a couple of weeks later did it strike me that the child was much shaken and was having a hard time dealing with it.

There were signs of depression—loss of appetite, lack of sleep and many insecurities and fears. I had to try to undo certain things that I was doing. Like, for example, discussing disturbing things over the telephone in her presence or answering calls while she was sleeping. I had not realised it was disturbing her sleep, which she told me about later. I had to get a school counsellor to intervene.

During the second wave, we were in a better position to deal with things. But yes, we went through a hard time. It is very difficult for single children of health care workers, especially when they see that their friends have their families with them. Every time you come home with a sore throat or stuffy nose, it worries you, but there’s little you can do.

On the positive side, my relationship with my daughter has become more honest. I have shared my feelings and fears with her and taken the time to know her better. I have understood the depth of her feelings and how receptive and sensitive a child she is. I am grateful to the pandemic for that.

As a doctor and working woman, you have a very strong sense of guilt every time you have to wriggle out of something pertaining to your child or her school. The pandemic has made it clear to me that I would like to prioritise different things. I want to be a mom first and foremost.

“I have become a parent, friend and teacher. I have not yet adapted to these roles.”

I am a mother to two boys—Ayaan, 9, and Aaryan, 5. During the pandemic, I have had to fill in many roles—that of a parent, friend and teacher. I have not adapted to those roles. It frustrates me and has affected our rapport. I find myself more irritated with them. Being with them the whole day is draining. Kids are such that if you give them some attention, they want more.

If I play one board game with them, they want me to play for the next two hours. Some days, I include them in my cooking or baking. I wake up every day thinking I have to be a good mother, do this and that for them, but 80 per cent of the time, that does not happen. Last year, I tried to do too much. This year, I have realised I cannot do it all. I have decided not to let parent guilt get to me and to give myself as much leeway as I give them.

I have noticed some behavioural changes and stunting of development in them due to lack of social interaction. Aaryan feels he has to match his older brother. So I have seen him play video games that he is not supposed to be playing. Before the pandemic, he went to playschool for seven months. So he does not have his own set of friends. He thinks that his brother’s friends are his. When children his age come, he does not like playing with them. He says they are babies.

As for Ayaan, now in the third standard, validation from his teacher is very important. During online classes, that does not necessarily happen. So he expects from me everything that he expected from his teacher. They are craving more attention. Their only window to the outside world is through their parents.

Adjusting to online education was tough. These kids are small—they have not had much access to gadgets. Ayaan did not know how to log in to Zoom, mute the screen or other similar things. So, on the one hand, I am telling him that he has to learn how to use the computer. On the other, he is not allowed to spend too much time on the internet. It confuses him. Ayaan asked me the other day to buy him a phone so that he can start an Instagram account. If it were not for the pandemic, he would have been exposed to all this at a much later stage.

“I am worried about my son’s future” 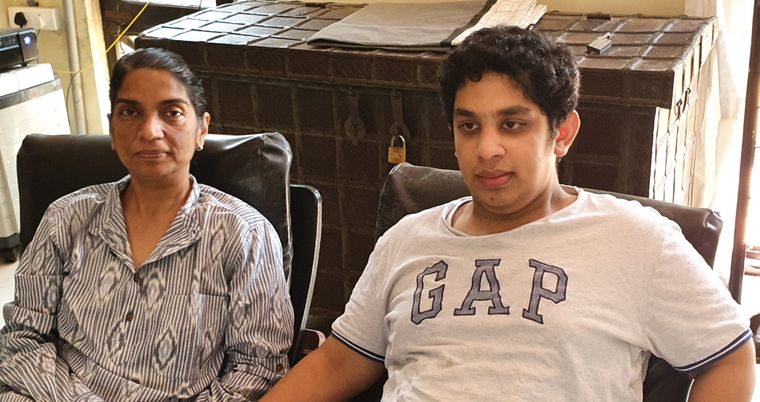 In it together: Fatima Ali with son Mohammed.

When he was nearly two years old, my son, Syed Ali Mohammad, was diagnosed with Fragile X and autism. During the pandemic, the lack of social interaction has affected him a lot. He misses going to the mall or to the movie theatre. He watches videos of places he wants to visit—like the UK and Dubai.

My husband and I are worried about his future. What next, we wonder. During the pandemic, when he did not have to go to school, we got to spend more time with him. That’s when we realised what needs to be done and where he is at. We are using this time to do various therapies and understand things better. The big question still remains: What is he going to become? He thinks about it. He has aspirations and wants to do something that matters. It is now up to us to see that his dreams are fulfilled.

I think the lack of social engagement could impact him in the long run because of his anxiety issues. Just a change of scene—going from one room to another or entering a different house—is a big deal for him. He does not take well to change. You have to prepare him for it. When we visit someone, he will stand outside the door until he feels he is ready. He is very sensitive. If you look at him in a way he interprets as not acknowledging him, then he will remain outside and the anxiety builds up. So, if he is not used to it anymore, it will take time to get him to go to places where he would have normally gone more easily.

We have to consider all possibilities. What if we get hospitalised? We are preparing for that by writing our will and appointing a guardian. We try and keep safe, especially because we have a responsibility towards our son. 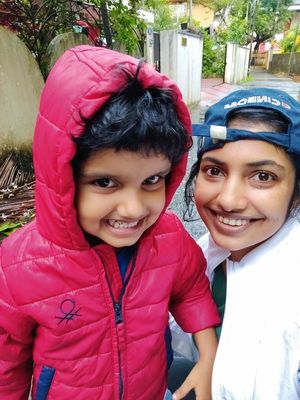 During the pandemic, my two-year-old, Eka, has become very clingy. Initially, when I was working from home, she would barge into the room whenever she wanted to play. I had to make her understand that she could not do that. Even now, some days in the mornings, she cries for me or my husband to stay with her and not go to work.

I think most of the problems stem from a lack of interaction with other kids her age. In our neighbourhood, the kids nearest to her in age are six and 12 years old. Still, they were providing her with some exposure to other children. With the pandemic, especially during the first lockdown, no one was allowed to visit. Her only extended interaction was with my mother and my in-laws, who stay with us. We were forced to give her more screen time because we had no other way to keep her entertained.

She has been throwing a lot of tantrums. Things like not being permitted to play with the neighbour’s dog would make her sulk. She had a lot of pent-up energy and would not let us switch off the TV or prepare her for bed. We, as parents, could not do anything about it. Even toys, after a point, start losing their charm.

This is a very important developmental stage for children. I am most concerned about my daughter’s emotional development and social skills. What if she goes to school and does not understand reasoning? What if her teacher says no to something and she thinks she can get her way by throwing a tantrum, because that’s what she has been doing at home? What if other kids are not cordial? All these children are seeing are imaginary people on TV, so they will not know how to interact with each other. Many shared experiences are lost, like sharing a playground, toys, or a classroom space.