Petrifaction (people turning into a stone) is a common theme in folklore and mythology of different cultures. In Singhasan Battissi, a collection of Indian folktales, we have the story of King Bhoja who discovers a throne with 32 stone statues; these are 32 apsaras (angelic women) turned into stone under a curse.

Recently it was reported that Lexi Robins, a five-month-old angelic baby from the UK, is facing a phenomenon similar to petrifaction. Her condition is known by the name Fibrodysplasia Ossificans Progressiva (FOP)—a rare genetic disorder that affects only one in two million people. FOP is characterised by the abnormal development of bone in body parts where the bone is not present normally—ligaments, tendons, skeletal muscles. As bone takes over, movement in areas affected by this condition would become nearly impossible. And, this would affect the patient’s everyday activities including eating and talking. The earliest documented cases of this condition date back to the 17th and 18th centuries. It is estimated that there are more than 3,500 FOP patients in the world now. Researchers are aware of more than 800 cases. 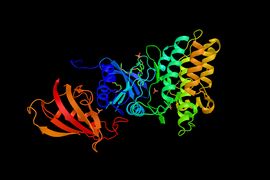 Lexi’s huge toes prompted her parents to take her to doctors. And, soon it was found that she is suffering from the life-limiting disease of FOP.

Malformed great toes at birth is a classic symptom of this condition. The extra bone formed in the body of an FOP patient cannot be removed by surgical intervention as a new bone will grow back in its place. Surgical interventions may, in fact, worsen the condition of the patient. Also, the patient will not ever recover from the condition; in fact, the condition would progress over the ages. Episodic flare-ups (inflammatory soft tissue swellings) are common in FOP patients. This usually happens when the body initiates the process of generating a new bone. Each flare-up episode would cause immense pain to the patient. The abnormal development of bone would eventually lead to stiffness also in affected parts.

The disease is caused by the genetic mutation of a gene (ACVR1) in the bone morphogenetic proteins (BMPs) pathway. BMPs are important for embryonic skeleton formation and skeleton repair post-birth.

There is no known or definitive treatment for this condition, yet. During flare-up episodes, the patients are given medicines to reduce the pain from inflammation and tissue swelling. Most people with FOP will be in a wheelchair by the time they reach their late 20s. And, the median lifespan for FOP patients now is 40 years.